Oh No! Not ANOTHER Fookin’ Sleaford Mods review!!!???  Yes, but this one is written in-the-style-of the band by Ged Babey (dedicated to the late Steven Wells) and to be read in the same way as JW ‘sings’.

March 2015.  Must be time for the backlash to start any day now surely?  Build ’em up – knock ’em down, the British Way. Exclusive! Sleaford Mods  secretly vote Tory, went to Public School, wanked in a circle jerk with Boris, Clarkson and the Archbishop of Cunterbury and keep exotic fish in cramped conditions in their toilet bowls … BOLLOCKS.

Still, if Noel ‘Clapped-out Cloughie Act’ Gallagher hates them, they must be good.

Student readers of the NME, and Guardian, lend me your ears, or FUCK OFF!  Sleaford Mods are the ‘flavour of the month’, the new punk rock hip-hop chip-shop wrappers, discarded like johnnys under the bed.  Meedya darlings, Pet Proles t 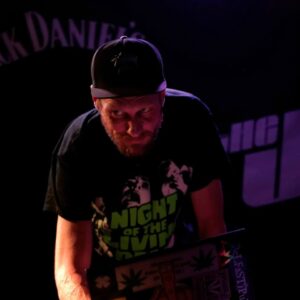 ‘It’s just a man-shouting, call that music? He just stands there with a lap-top and a shit-eating grin. Swigging and checking his phone. I could do that!’

No you fuckin’ couldn’t  you TWAT.

How do you dance to this Samantha? Just pretend to like it and suck your cheeks in Mylie. Mind the pissed bloke getting carried away with the old punk granddad. Weh-Hey!

I invented Sleaford Mods when Metal Box came out, shouting along to the track ‘Socialist’.  ‘1,2,3, Go! I got an ego. It won’t let me go whatamIgonnado?’ Kung-Fu Internationale and the Fall when they were good.  Watching Mike Leigh Plays and Trevor Griffiths ‘Comedians’ with Jonathan Price before he played sax in Breaking Glass; early Mute records like the Normal, Crass, the Business ‘Suburban Rebels’, Jerry Sadowitz the Pall Bearers Revue. Boogie Down Productions. Eric B and Rakim, the Beastie Boys and Suicide with all the Americana sucked out and replaced with English back Street bile. “And the mad kid said, gimme the lead, gimme the lead…”

Just realised I am the middle-class trainspottist referred to in-song, but who gives a shit. The Mods slagged off Denmark St, yet still played the 12-Bar before it closed. Contradictions R-Us.

Marmite, marmite, marmite. You either love ’em or you hate ’em.  BOLLOCKS  more like the ‘You’re gonna wake up one morning and know what side of the bed you’ve been lying on!’ T-shirt by Westwood and MacClaren.

People moaning and getting angry about Sleaford Mods on Facebook sound like boring old cunts writing in to Points of View “Why-Oh Why -Oh Why…?”  Bollocks. Bert Weedon Play-in a day rock school bores.   Musicianship – it’s a craft – like fucking knitting. Watch that Granma Go! Marmite on your toast, marmite on your sunday roast. Sunday Joint. (snigger.) Back to the chillout room. SM’s are here to make you feel alive.  They are comedy. Tragedy and taking the piss out of every fucker. This isn’t boring talky-talky lecture politics, this is the politics of a life LIVED.  Which is why a lot of under 40s just don’t get it…

Can’t wait til they get on Jools Holland. Try and add some boogie-woogie fuckin’ piano to this you TOOL!

Is it Dada? More like Da Da Da by DAF. Cabaret Voltaire’s Nag Nag Nag, my wife loves that one. Duchamps readymade except with a backing track instead of a urinal. Obscure Manc rap act First Offense. Shaun Ryder and the fuckin honeymonster. FUCK OFF.

Eugene Butcher, Editor of Vive Le Rock admitting he was talking during their set and told to shut it and boasts about it in a review. What a tit-rifle. He gets it then. Back to Denmark Street ya dinosaur.

The place was fuckin’ packed full of students and people in local bands.  Wanna be seen in the scene music lovers and call that music detractors  swearing they were there .

Just in case UKIP get in power the BBC are preparing a new version of Love Thy Neighbour for broadcast. Emails sent suggesting Sleaford Mods as the new Alf Garnett only more PC. FUCK OFF!

Pat from the Joiners ex-Blaggers ITA roadie, fuckin’ loved this gig, this band, made all the heartache and bullshit worthwhile. Wolf kept from the door for another month.

Honourable mention for Science of Eight Limbs who supported; mental instrumental, guitarist and drummer who sound like Muse playing Rave music on the wrong instruments; probably geniuses, a great festival band if you’re on the right drugs.

Is this working? Steven Wells coulda done it a lot better… or is it glib glib glib gib gib  gibberish. I love Sleaford Mods I really, really do. But I worry for Jason Williamsons health.

They came, they saw, they conquered. Crap 70s comedy used to be called “Light Entertainment”, well Sleaford Mods are Heavy Entertainment with fuckin’ attitude. FUCK OFF!

~
We’ve teamed up with promoters Sound of Static to give away a pair of tickets to see Sleaford Mods at The Hairy Dog in Derby this Tuesday. Go here for details.

All words by Ged Babey. More writing by Ged can be found at his author’s archive.