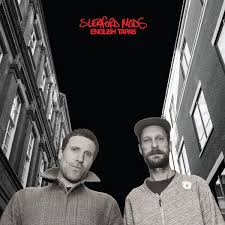 Louder Than War’s Michael Halpin review the latest release by arguably the most important act in Britain.

It is unfair to say that Sleaford Mods first album for Rough Trade Records, and their ninth in total, is more of the same but while Jason Williamson is still angry at 21st Century Britain, ‘English Tapas’ picks up where 2015’s ‘Key Markets’ left off.  Please understand however that this is no bad thing.  This time round Williamson either mocks or is irritated by the following: Gym going fitness fanatics, hipsters, Boris Johnson, Ringo Starr, coke-heads, the Superdry clothing label, televisions in pubs, the NME and Philip Green.

Williamson’s outrageously prolific tirades do not necessarily become diluted but from a musical point of view, Sleaford Mods may be in danger of becoming predictable, mainly due to their stripped back approach.  One suspects however that Williamson and his musical counterpart Andrew Fearn are not concerned with the dangers of becoming predictable or diluted, they are simply needing to release this material and needing to rail at all that agitates them in post-Brexit Britain.  For starters, someone’s got to do it and for some inexplicable reason, it seems to be left to the 46-year-old Williamson; such is the lack of concern coming from the majority of musicians the right side of 30.

The fact Sleaford Mods create at such a prolific rate means that suddenly we have a band who hark back to the days when the likes of The Specials, The Jam and The Clash would write and release material relating to what was happening within Britain at that very moment – a part of British music that seems to have been lost as record labels consider marketing strategies ahead of creative relevance and art.

The Opening track on ‘English Tapas’, ‘Army Nights’, is a touch unsettling in a 1970s-Carry-On-film-kind-of-way as Williamson tells a Ray Davies/Damon Albarn-esque tale of what seems to be an army fitness instructor with a penchant for getting his muscles squeezed in his caravan at night.

‘Just Like We Do’ begins with Williamson mocking the pretentiousness of a certain type of musician, “I’m currently listening to rustic noise recorded in 1982 in the Black Forest in Germany” and appears to be a rant at an ex-punk who Williamson at least, deems to be a has-been.  “Punks not dead, well, it is now, or does no-one care about you?”

‘Moptop’ opens with the amusing line, “Do you mind? You biffed my nose” and does not sound a million miles away from Basil Brush before morphing into a Boris Johnson baiting outburst.  ‘Messy Anywhere’ takes a swipe at the stupidity of the weekend-coke-habit, “Lets spend another hundred quid on getting out of our trees” and “we get all messy anywhere, we go late.”  Williamson sneering at those coke-confident individuals he openly admits to being one of in the late 90s.

‘Snout’, the best song on the album, bemoans what sounds like a cocaine induced pyjama purchase before appearing enraged about the Superdry clothing label becoming “the armour of the working class!”

‘Drayton Manored’ is a tale of a stoned trip to the shops, “a trip to spar is like a trip to Mars!” while ‘Carlton Touts’ addresses the paranoia of British pubs being open all day and brainwashing its regulars with 24 hour BBC News.

‘Dull’ is disenchanted with Ringo Starr publicly stating that he voted for Brexit (granted he was never the brightest Beatle, but still…) before Williamson seethingly asks the listener to, “try scrolling down a website, the NME, without laughing“ and this line, mocking what was once arguably the centre piece of British alternative music, sums up the crux of ‘English Tapas’.  It seems that Williamson, like many, is exasperated, not only by life in Britain in 2017 but also by the demise of what were once vital elements of British culture.

‘English Tapas’ may not be the best album Sleaford Mods have produced but while they seem to be the only artists in Britain willing to speak out with passion about what is happening in the UK in 2017, it seems trivial to criticise them.