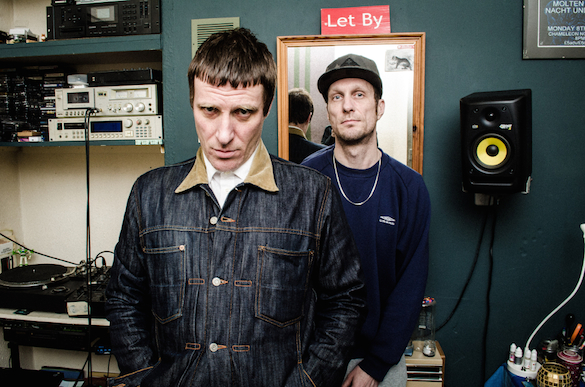 Alt-rap Gods Sleaford Mods spilled their hearts all over Cardiff last weekend with a couple of typically brilliant shows. For Louder Than War, Simon Tucker reviews.

The truth is a funny old thing. It depends on a person’s perspective, their politics, their upbringing. The truth, a concept that can be manipulated and presented to suit an agenda. The truth, something that be twisted to get the desired effect from a group or individual. The truth can be scary, funny, enlightening, or destructive. In an age when every paper and news outlet has an agenda, when there are wars raging and big political changes afoot, the truth can be a difficult thing to find.

Well yesterday, in a world famous record shop and a small club, the truth was visible to all who were lucky enough to witness it and it came in the form of Nottingham duo, Sleaford Mods.

Performing a four-song set in Spillers Records on a glorious sunny Sunday afternoon, the duo set a new benchmark in powerful, direct delivery. It’s a masterclass in music as rallying call. As the deliciously grimy and raw music rattles through the entranced crowd and Jason Williamson spits his cutting, humorous, and poetic lyrics. The crowd lap up the performance with fans mouthing lyrics and new comers to the world of Sleaford Mods instantly becoming converts.
A perfect taster for the main event later that evening.

Then it’s over to the Moon Club for what will go down as one of the gigs of the year. Nonchalantly taking the stage, Andrew Fearn sets up his laptop from which the pummeling music will be delivered and Williamson soon joins him and then with a polite “hello” we’re off.

The set draws heavily from their brilliant recent long-player, Divide and Exit, with songs such as Little Ditty and Middle Men all sounding heavier and faster than on said album. Naturally, it is Jason that a lot of the crowds eyes are on and it is a joy to witness the transformation from the affable, congenial man who happily chats to the audience beforehand with not a single ounce of rock star aloofness or arrogance to the snarling, gurning, fire and brimstone performer that he is when on the stage. There are no pretentious dance moves or staged mannerisms, but the way he visibly changes physically is quite a sight to behold. His vocal delivery and lyrical content are Shakespearian in their poetic anger. A Malcolm Tucker for the working classes.

Fearn is also someone who is magnetic on stage. Seeing him live instantly dispels the frankly ridiculous theory that he “just presses play” as he is constantly on the move, rocking back and forth and bobbing to the music that he created. His demeanor on stage is of one who loves what he does and the lyrics that James has written as he sings along like a member of the crowd, smiling and laughing like the rest of us. The dynamic between the pair is of a mutual appreciation for the others talents and the work that they are doing.

As the band finish their set with a “cheers” the sweat sodden audience call for an encore to which the band duly oblige, albeit after Fearn quips “we’re not Elton John” and then it’s over, the audience (which consists of all types from original punks to young people desperate for their voice to be heard) all fired up, smiling, and slightly stunned by what they have just witnessed.

Sleaford Mods are REAL, they are NOW, and they most certainly are the TRUTH. Make sure you catch this most vital musical force live … it may just change your life.

You can find Sleaford Mods online here: sleafordmods.com. They’re also on Facebook and they tweet as @sleafordmods