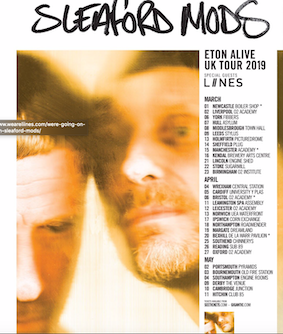 Today, Sleaford Mods announce a new album, released in spring next year, and their ETON ALIVE tour which hits 32 towns and cities across England and Wales – and they’re taking Manchester post-punks LIINES on the road with them.

The Sleaford Mods tour will be an opportunity for LIINES to play mostly new cities and towns across England and Wales, a prospect singer Zoe McVeigh is relishing:

“We are overwhelmed. Sleaford Mods are one of the most relevant, vital bands in the country. To be touring alongside Jason, Andrew and the Mods team will be an incredible and unforgettable experience. We can’t thank them enough and we cannot wait to play every single one of the 32 dates! It can’t come soon enough.”

Tickets for the Sleaford Mods tour go on general sale at 9AM, Friday 7 December:

LIINES released debut album Stop-Start in May (on Reckless Yes) to much acclaim from the likes of John Kennedy (Radio X), Steve Lamacq and Tom Robinson (BBC 6 Music), plus a 4 star review from Q Magazine and glowing praise from other publications.

As well as a string of headline gigs, LIINES have supported Hot Snakes, bis, The Membranes and open for The Slow Readers Club at the 02 Manchester Apollo on 14 December. They’ve also played storming sets at Dot to Dot Festival, Ramsbottom Festival and Words and Music Festival.

LIINES are Zoe McVeigh (vocals/guitar), Tamsin Middleton (bass) and Leila O’Sullivan (drums). The Manchester-based trio are a prominent band in the post-punk / new-wave scene, with comparisons ranging from Savages to PINS to Desperate Journalist. Their sound is an infectious, urgent and at times furious blend of Riot Grrrl, post-punk and alt-rock sounds which take in elements of their collective influences.

There’s the dark angular undertones and brooding introspection of Joy Division, the high energy of The Pixies and the emotive, impassioned sound of Sleater-Kinney wrapped in catchy fast-paced riff-laden songs.

LIINES started out in 2014, born of a previous projects from founding members Zoe McVeigh, Steph Walker and Leila O’Sullivan. Steph Walker (bassist) left LIINES in 2017, to be replaced by Tamsin Middleton, but not before completing the recording of the band’s debut albumStop-Start.