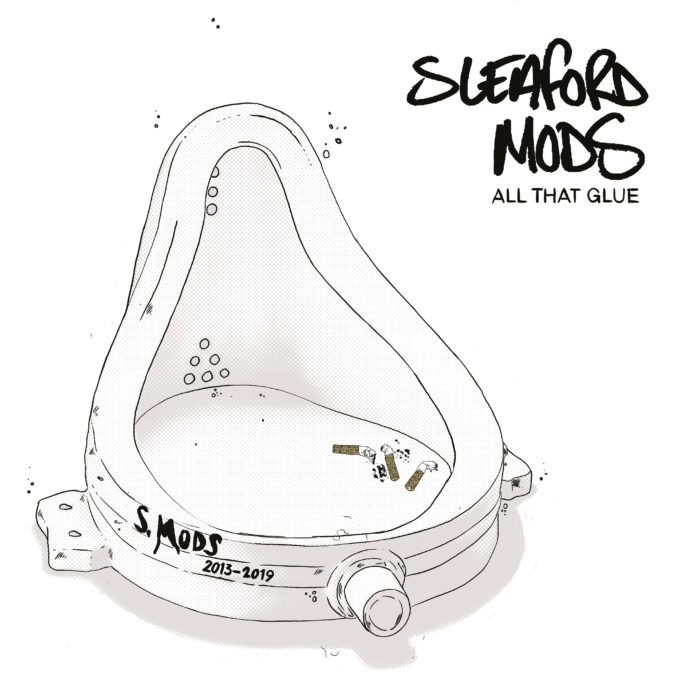 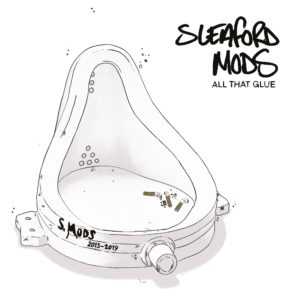 Sleaford Mods – All That Glue

Jason Williamson is the poet laureate of our nation’s underclass as Sleaford Mods set a swearing world record on this lively compilation of their greatest hits.

Once upon a time Dr John Cooper Clarke was the poet laureate of the old working class, and now Jason Williamson has taken on that mantle for Britain’s new underclass battling to stay afloat in a underground world of zero hours contracts, food banks and the mess that is universal credit.

People forget the good Doctor Cooper Clarke melded verse and music on his classic eighties Snap, Crackle, Bop album with The Invisible Girls, and Sleaford Mods have updated his idea albeit with a distinctive East Midlands accent, and more contemporary beats written on a cheap laptop.

This is not a record for the easily offended as one of Iggy Pop’s favourite bands set a world record for the number of expletives on one record, and a total that will be very, very hard to beat.  But, frankly, if you are offended by some choice words during Williamson’s often grim tour of life on the margins then it is you that has the problem as you’ve missed the point of this album by a million miles.

McFlurry, from their breakthrough Austerity Dogs record, gets proceedings off to a suitably angry start with Williamson’s stream of conscious diatribe over Andrew Fearn’s deceptively simple beats. The raw honesty of Williamson’s semi spoken rant about a hellish world throwing up lines like: “Under the blue rule/where the cuts make people stink/you smell” and him bemoaning spending “One pound 29 on shag all.”

Fizzy from the same album is a glorious rant against bovine managers who don’t have a clue: “Do you want me to tell what I think about you, cunt?/I don’t think that’s a very good idea – do you?/you pockmarked four-eyed shit-fitted shirt, white Converse.” Most people have worked for a dick like that.

Early tune – and stone cold modern classic – Jobseeker gets its first official release with Williamson riding Fearn’s beats as he enters the living hell that can be signing on in Austerity Britain. It is angry, and also funny, as Williamson recalls being asked what he has been doing to find gainful employment. His reply is priceless: “Fuck all/I’ve been sat around the house wanking.” No answer to that is there?

Amongst all the sweary anger and Fearn’s simple, but often hypnotic, beats Williamson is a keen observer of a society in disarray, and Tied Up in Nottz will be the only song ever to feature the line: “I woke up with shit in my shoe outside the Polish off-licence.”

By 2015’s Key markets the duo really hit their stride with much bigger production values on the bouncy Tarantula Deadly Cargo, and Williamson’s lyrical style slowly moving away from angry rants. T.C.R is the nearest thing on here to a hit single as Fearn fashions a really catchy 80s electronic riff, and there’s even a strong chorus.

By the time tracks from their top 10 album Eton Alive make an appearance there are major changes in tone both musically and lyrically.  It would be pathetic if they were still pretending to be making music in a council flat, and reflecting the crazy world around it, when they have become such a success selling out big venues and heading off on international tours. OBCT even has cheesy kazoo solos over the much more subtle and sophisticated looping riffs.

When You Come Up To Me sees a much more reflective Williamson sounding more like a Notts version of Tony Bennett as if he realises his more settled, middle class lifestyle is a millions miles away the rants of yesteryear. It is to Williamson’s credit that he clocked that reality before becoming the very thing he despises.

We all yearn for a better Britain where a million people won’t be reliant on foodbanks, and our NHS is returned to its former glories. When we reach that point these raw, furious and often laugh out loud funny songs will act as an oral history of what it is like to be disconnected from society as you are ground down under the heel of unfettered capitalism.