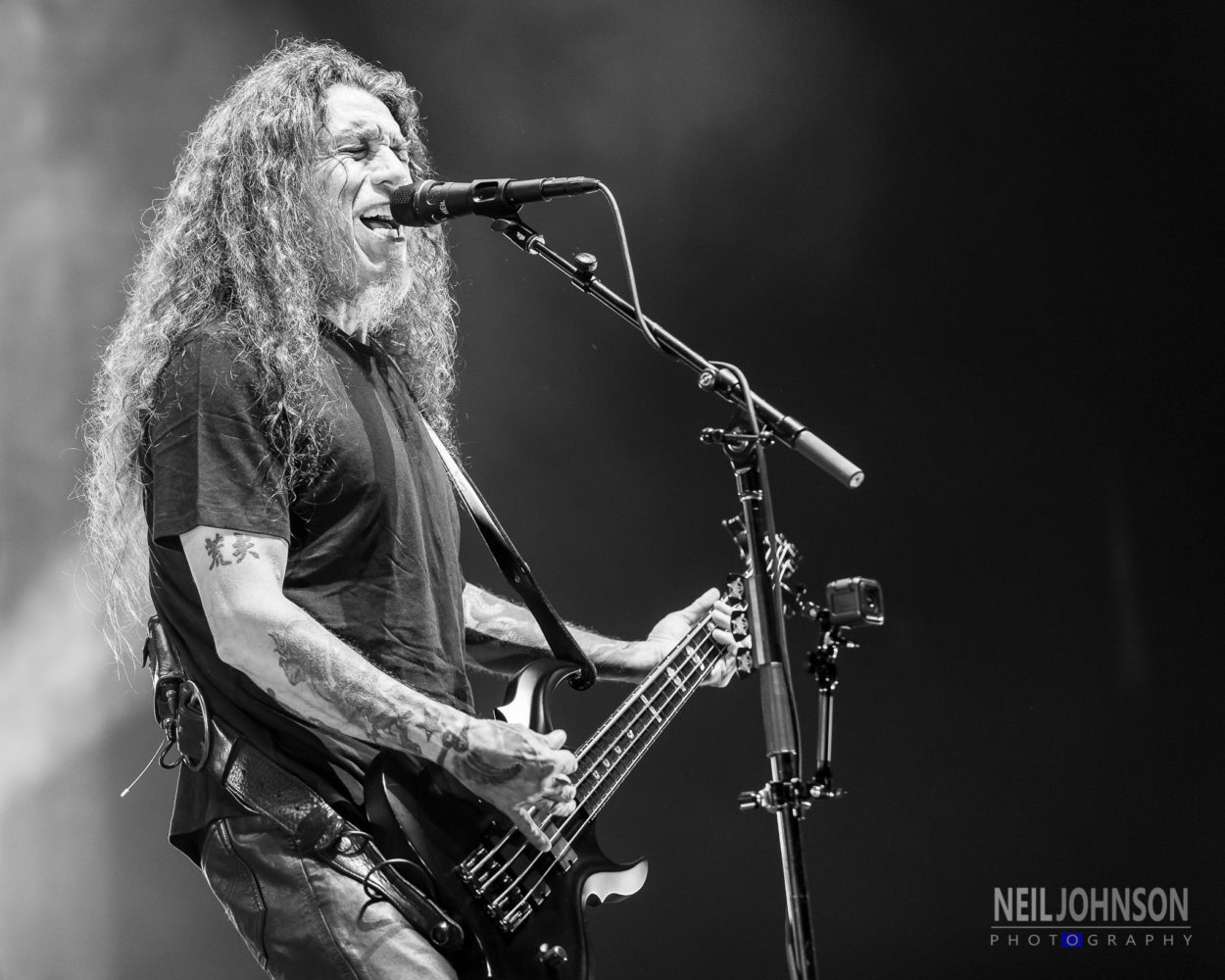 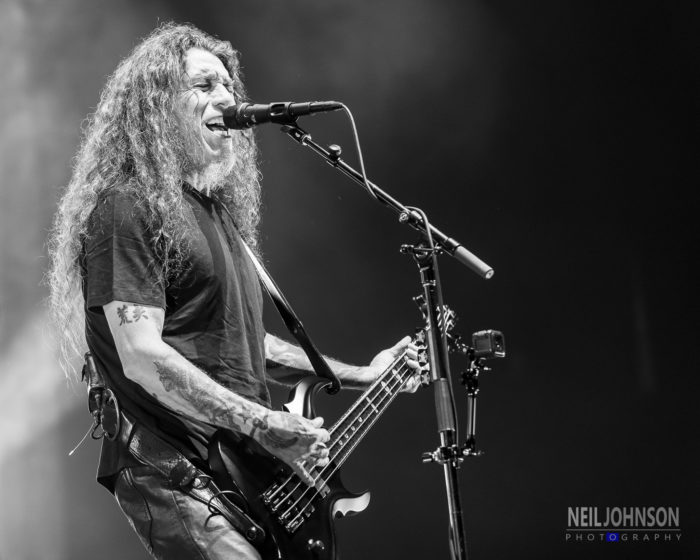 The biggest event on the thrash metal calendar for years. The Slayer farewell tour, along with guests Lamb of God and support from Anthrax. The enormity of this gig is emphasized by Anthrax being in a support slot. This is huge. The end of the Abyss.

Thrash metal has pretty much made up two-thirds of my music listening diet from when I was a thirteen-year-old kid. Back then we only had two sexes, things were more binary than they are today. Slayer epitomised that time for me, the raw, relentless rage and speed from their Reigning Blood album was as simple as it was powerful. The first time listening through, the hairs on my skinny thirteen-year-old arms were standing on end. I still remember my Dad coming in and asking what I was listening to with a look of concern on his face. It’s easy to forget that back in those days, people genuinely thought that listening to Slayer would infect your soul.

The last thirty-six years has led to the genre merging and morphing, but nobody comes close to Slayers unique style. Tom Araya’s vocals and Kerry King’s shredding create this wave of energy that is clinical and brutal. There is no flattering fuzzy rhythm, Slayer is sharp and piercing, this is thrash metal with the precision of a surgeons scalpel.

Tonight is at Birmingham Arena, this is a huge building filled with thrash fans. The bill is Obituary up first, who offer up their trademark, fuzz-drenched-heavy-stuff. I loved them back in the day and it’s great to see them getting some time in front of such a large audience. They start with the grinding Redneck Stomp and finish up with Slowly We Rot, which is slow and uber heavy. The guitars reverberating through my entire body and the floor, the walls, seats and pretty much everything for about a ten-mile radius. I genuinely expect that The British Geological Survey team are probably still wandering around the outside of Birmingham Arena trying to figure out what’s going on. 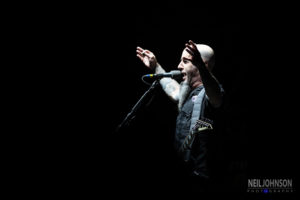 Anthrax takes up the next support slot. Let that sink in for a moment, Anthrax in a support slot. One of the genre’s defining giants, relegated to third on the bill due to tonight’s monster headliners. As usual, though, Anthrax absolutely take the roof off. They may be in a support slot but there is absolutely no holding them down. Their seven-song set includes Caught in a Mosh, Got The Time, Antisocial and closes with Indians. The highlight is Antisocial, which despite being a cover of the Trust tune is just pure undiluted Anthrax. They just seem to come alive during Antisocial and everyone in the Arena is with them. The intro and outro to their set are Pantera’s Cowboys from Hell, which is a nice touch too. Anthrax has set the bar pretty much as high as any support band could. Tonight’s headliners are going to have to work hard!

Handily Lamb of God rise to the challenge. They begin with Omerta, the spoken word “Whoever appeals to the law against his fellow man is either a fool or a coward, Whoever cannot take care of himself without that law is both”. Randy Blythe is raging from the outset and bounding around the stage looking for stuff to jump from. The austere red lighting adds to the drama. Their set is a ma 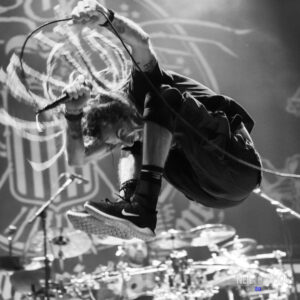 sterpiece of trademark metal-core-grooves and blast beats. Laid to Rest and Redneck are the highlights from their set, both have the arena floor a swirling maelstrom of metalheads hair, arms, and the occasional cup of water. This isn’t unusual at a metal gig, but the size of the circle pit is truly immense.

There is a swift set change over and the current traditional tape of Delusions of Saviour is played whilst flames engulf the stage, we’re held quite a way from the stage at this point and the heat is intense. Then the black curtain drops and they slam into Repentless, every bit the modern thrash classic. I work my way through the photo pit until I get to Gary Holt, who is absolutely shredding but I’m hit with the realisation that it’s not Jeff Hanneman on the left stage and how much the thrash metal world lost the day he died. It has to be said though, that Gary is an amazing guitar player and the live sound of Slayer is certainly no worse for his presence.

The set is a highlights reel of the last thirty-six years, old school monsters like Hell Awaits and Black Magic, although the majority of the set is made up from Reign in Blood and Seasons in the Abyss, which is no bad thing. Despite the internet recently voting South of Heaven the best Slayer release, everyone knows that Seasons is, in fact, the defining Slayer record and fans are treated to four tracks from it tonight. As good as Raining Blood is in tonight’s show, Seasons in The Abyss is still the highlight for me, that haunting lead-in followed by one of the finest heavy riffs ever created. Ok, so Raining Blood does get the better reception from the Birmingham Arena crowd, but I can forgive them that.

It is a shame to only have half of the original Slayer band here in Birmingham, the death of Jeff Hanneman and recent fall-out with long-standing drumming god Dave Lombardo do leave me feeling a little short-changed, but Paul Bostaph is a world-class thrash drummer with precise brutalism and Gary Holt shreds his heart out all night. The live show is a thrash-metal masterpiece, regardless of what some critics have written, this IS Slayer and the show is a fitting closure to their thirty six year live career. Some of my favourite recent tracks get missed from the set, most notably World Painted Blood’s Beauty Through Order and Playing With Dolls don’t get any airtime. Neither does Piano Wire from Repentless, but I guess with such a long history it’s hard to keep everyone happy.

As they close out the show with Angel of Death, Tom Araya’s screams echoing around Birmingham Arena, it’s the end of an era. The end of the Abyss, the journey South of Heaven, no more Playing With Dolls and God does indeed Hate Us All.