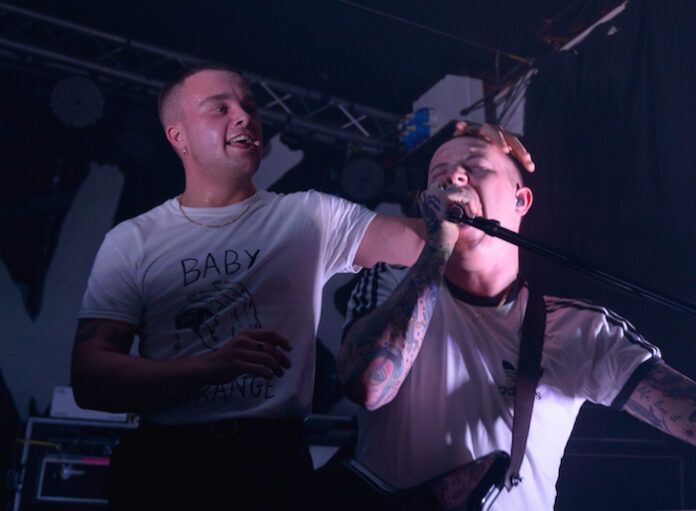 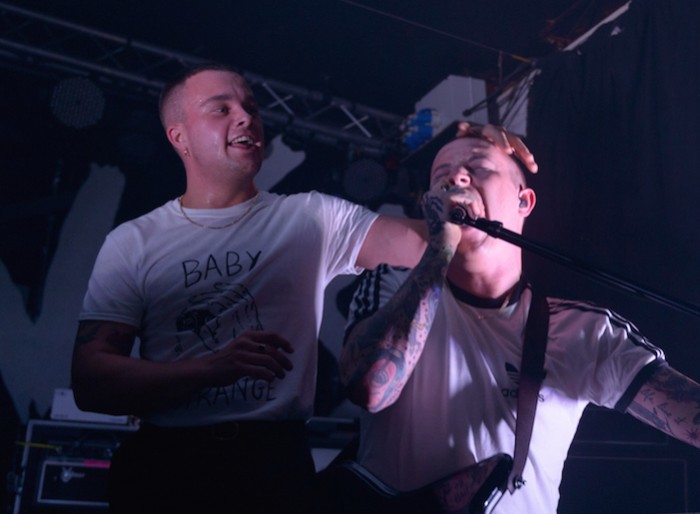 Photo above and all others on this page © Lee Hammond

(With photos by Lee Hammond from the Cluny show a few days previous to this one.)

Slaves were the oddball standout act of this year’s NME tour. Louder Than War’s Stephen Murphy saw them for the first time on that occasion, and was suitably wowed. Now headlining a UK tour of their own, will the Kentish duo prove to be just as awe inspiring the second time around?

With their debut album out in June, and a recent NME tour slot which saw them reduce audiences across the UK into grinning, sweaty messes, Slaves seem to be on an unstoppable path to rock n’ roll glory. Whilst they were riveting to watch at Nottingham’s Rock City back in February, there were moments where their cheeky chappy double act threatened to overshadow the quality of their songs, and as everyone knows, the line between being engaging/entertaining and really fucking annoying, is razor thin. Can Slaves stay on the right side of the line?

Before finding out, there’s the not insubstantial matter of tonight’s openers – the London four piece, Crows.

If you’ve ever wondered what it’d be like to stand on the edge of an approaching hurricane, you only need to go and see Crows live to find out the answer. Waves of brutal melody instil wide eyed fear and trembling bliss in equal measure, and it’s only in the lull between tracks, that a horrifying realisation dawns – my testicles have attempted to crawl up inside my body to escape the sonic onslaught. Eek!

The scrotum shrivelling shock and awe of the songs though, is only matched by the intensity of front man James Cox. Like a menacing mix of Bez and Ian Curtis, Cox prowls the stage like a wild eyed rabid dog, and when he climbs out into the audience, there’s a moment of genuine concern that someone’s going to get mauled and partially eaten. I want to shout “watch out, he’ll have your arm off!”, but there’s no point. No one would be able to hear me over the all consuming racket.

Crows are absolutely a band to watch out for. Loud, melodic and dangerous, they really need to be seen (and heard) to be believed.

Next up are Baby Strange.

With a back catalogue that could quite happily soundtrack a potential BBC4 documentary entitled ‘Punk, punk, punk and a bit more punk’, the Scottish trio appear to be an amalgamation of every decent band who’ve ever traded under the aforementioned banner. Somehow though, Baby Strange have gone beyond being derivative genre copyists, and have come out the other side with a recognisable but strangely unique style.

With tracks like Luver and Friend as prime examples, Baby Strange’s whole set is a violent struggle for supremacy between the tunefulness of The Clash, the growling rock-a-billy of The Fall and the cheerful idiocy of Oi! Meisters – Sham 69.

Will Baby Strange conquer the world? Possibly not, but if its immediate punkypunkpunk-pop thrills you’re after, you could do worse than checking out these north-of-the-border fellas. 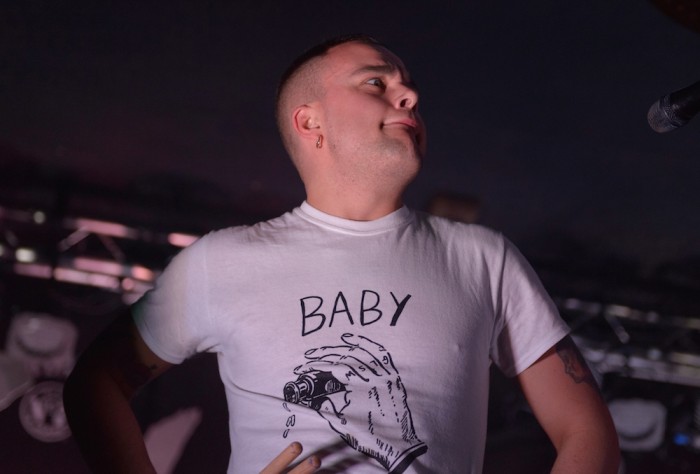 The moment Slaves walk out onto the Rescue Rooms stage, a furious battle begins in my head. As they launch into White Knuckle Ride, my brain can’t quite decide whether it’s witnessing the most exciting band of the last few years, or a couple of badly dressed geezers who’ve inexplicably managed to make me hand over my hard earned cashola, just for the privilege of watching them dick about for an hour or so.

The notion that it’s the latter, is regrettably reinforced as the gig goes on. Whilst Where’s Your Car Debbie and Feed The Mantaray are spell binding, top notch tunes, the accompanying pre-rehearsed audience banter, the stage diving mantaray and the incessant fucking jigging about by guitarist Laurie Vincent, makes the whole enterprise seem like some kind of end-of-the-pier/musical hall variety show – a punk rock Morecambe and Wise revival if you will. 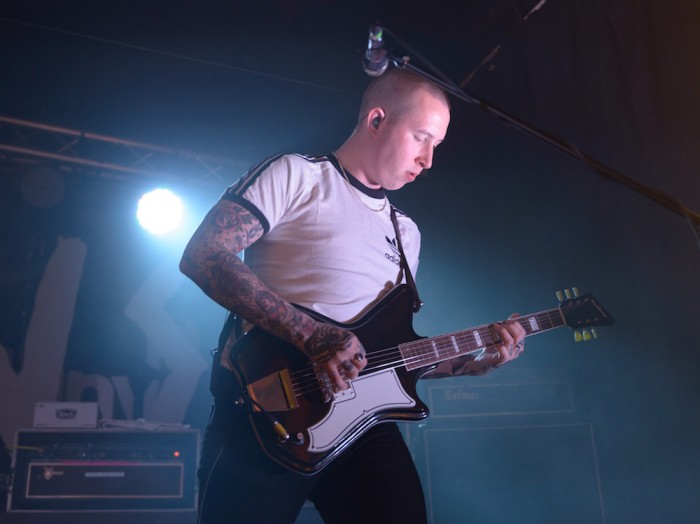 The crowing, shit stained glory though, is the band’s unfeasibly large light show. With the blinding force of a thousand suns, the power hungry monolith only confirms the fear that on top of everything else, Slaves are a Spinal Tap for the ADHD generation. You can almost imagine their Tufnel-esque conversation with the owner of the gig supplies emporium – ‘Yeah, can we have a lighting rig that goes one brighter than everyone else’s please?’. Christ on a pissing bike, there’ll be a mini Stonehenge and Invasion of the Body Snatchers pods on stage before you know it!

Call me a miserable old bastard, but when high jinx, startling man-made-fibre fashion choices and stage clutter start to eclipse the music, perhaps it’s time to have a rethink. Maybe Slaves need to get back to the energetic but stripped back display they put on at this year’s NME tour, because whilst I’m still a big fan of their squally garage/punk, I’ve little interest in seeing them live again. Desperately, desperately disappointing.

With thanks to Lee Hammond for his Slaves pics from the Cluny show a few days before Nottingham.