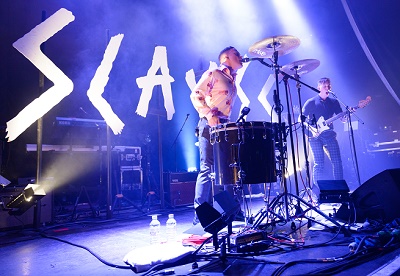 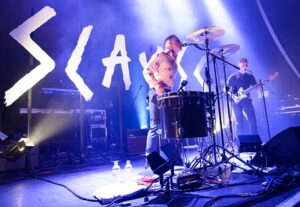 London-based garage-punks Slaves have just released their latest single, The Hunter. Check it our below, alongside this year’s NME Tour dates which they’re on the lineup for.

Last year was, unarguably, the year of the two-piece, with bands that had found a footing in 2013 suddenly becoming household names. Bands like Drenge and Royal Blood almost universally impressed taste makers by making “quite a lot of a racket” for just two people, whilst at the opposite end of the spectrum, Manchester’s Brown Brogues, sensing mounting interest in the newly-coined ‘two-piece’ genre, opted to take on a bassist in a bid to avoid being tarred with such a brush.

Then there’s Slaves, an act who aren’t as brazen in their flouting of convention (they are, after all still a two-piece), but their anarchic fusion of garage rock aesthetics and inextinguishable punk ideals make them one of the most exciting and subversive bands currently around.

Whilst last year’s run of sold out shows supporting Jamie T undoubtedly attributed to the band’s ever-mounting popularity, their burgeoning reputation is also underpinned by their ability to write deranged garage-pop that still manages to retain an (almost) commercial appeal. Such an ability is not often seen, but Slaves manage to demonstrate theirs with each track that makes its way to our ears, most recently in the form of new single ‘The Hunter’, three minutes of angular, off-kilter art-punk with a militant, stream-of-conciousness delivery that’s cut from the same cloth as previous releases.

With Slaves’ single releases earning them praise from all the right places, it hardly comes as a surprise that the band have landed themselves the highly-coveted opening slot at this year’s NME Tour, but it should stand as a testament to exactly where the band are going, following in the footsteps of those acts which have opened NME Tours past; Franz Ferdinand, Coldplay and Florence & the Machine, all household names by anyone’s standards.

Okay, so Slaves might not appeal to middle-class mums in the same way Coldplay do, but then again, that’s hardly their target demographic, and whilst again, they might not be likely to relish in the same commercial success as Florence & the Machine, they’re a thorn in the side of bands such as Royal Blood, whose success and popularity will forever remain a personal mystery.

You can catch Slaves alongside the Fat White Family, The Amazing Snakeheads and Palma Violets on the following dates:

Slaves will also play two sold out shows at: