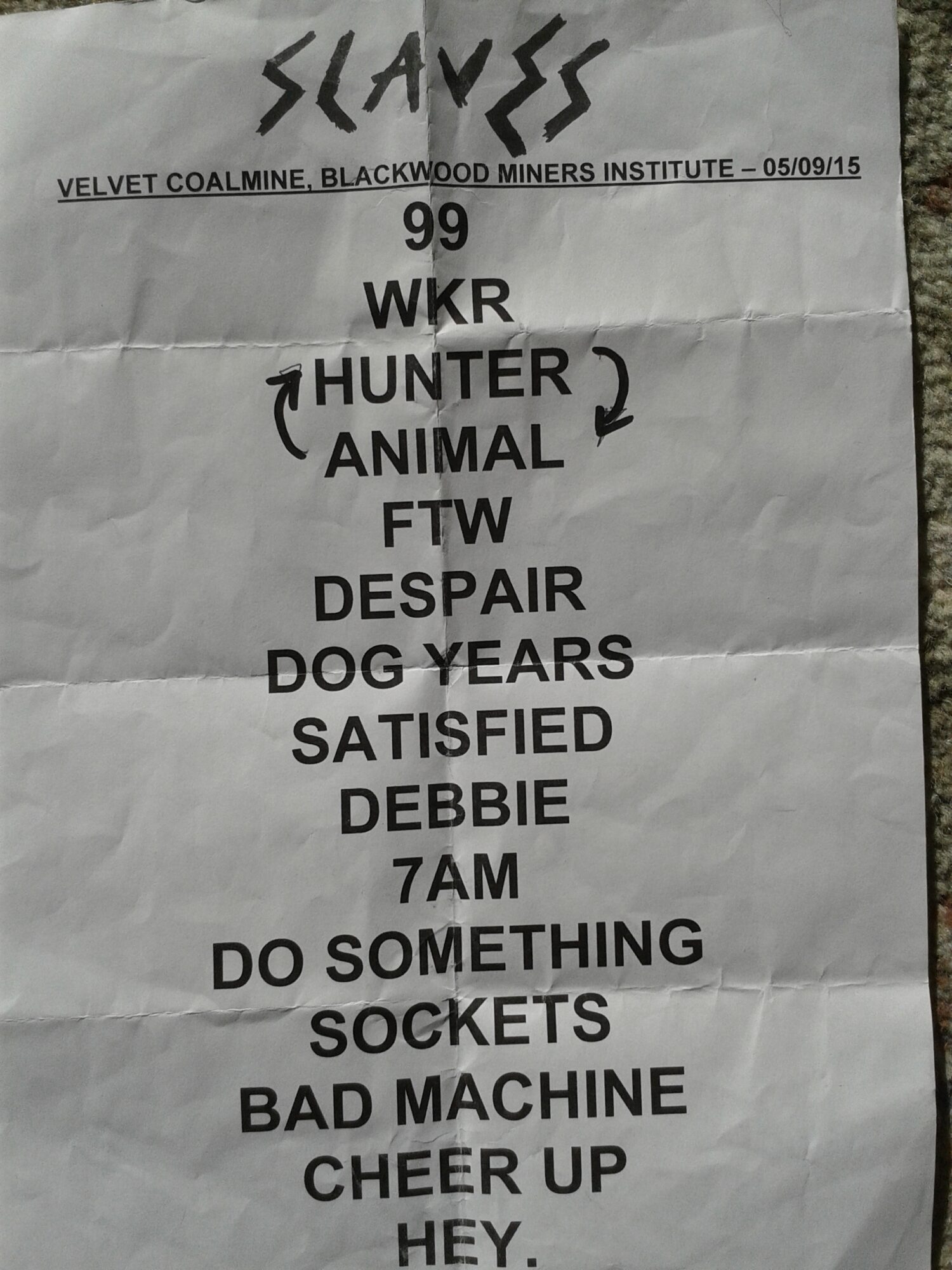 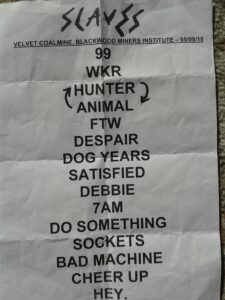 It’s the second year of the Velvet Coalmine Festival in Blackwood and Ioan Humphreys makes the trip to see the mighty Slaves.

We get to Blackwood late as I get spectacularly lost on the way. There is a buzz around the town. Things feel like they are getting very leery… The brilliantly titled Velvet Coalmine Festival (now in its second year) has been on all week with gigs, workshops, cinema (co-curated by Nicky Wire), literature events (featuring the lovely Rachel Trezise) and culminates this weekend with a very impressive music line-up. Last night a recently re-united Dub War played fronted by the inimitable Benji Webbe. I wasn’t there to catch them, but I am sure the place was bouncing. Tomorrow night the wonderful Meat Puppets are playing their first ever Welsh show. But for tonight, we have Slaves.

Glen Matlock and his band have unfortunately cancelled this evening’s support slot, but a couple of bands are shoehorned in to ably fill the Sex Pistols bassist’s slot. My ability to get lost and turn up late for tonight’s gig means I miss one of them – the glam punk extravaganza that are The Sick Livers. I’ve been told on several occasions to not miss this band. I apologise. Next time boys!

However, the racket that is emanating from the doors of the Miners institute means I haven’t quite missed the other draw for tonight, Henry’s Funeral Shoe. These brothers have been rocking around Europe and beyond since 2009 and have, by the look of tonight’s crowd, got a following bordering on fanatical. The first thing you notice about this compact and bijou guitar and drums outfit is that they are loud! Very loud! The second thing is their massive blues riffs. White Stripes comparisons may be a little lazy on my part, but the tightness of the drums and the guitars, as well as the brother’s interaction with each other just rings bells. Great big fat blues infused bells that I’m sure are still ringing in my ears. Need to catch a full set from these two very soon.

So up next are the unbelievably entertaining Slaves. But whilst the crew change over and beer is drank (I may have had one or two for medicinal purposes) the supremely cool and multi talented Don Letts is back on the decks and treating the swelling crowd to some blissed out tunes and reggae-fied hits by Nirvana and Coldplay. Everyone loves a slowed down skank to Fix You don’t they?

The time is now. The lights are down, the intro music is finishing and the Tunbridge Wells duo take to the stage to an ecstatic reception. They launch into Explicit Ninety Nin’ and the beer and plastic bottles start flying. God I’ve missed gigs like these. Holman stares menacingly into the crowd and asks if the crowd is alright. With an answer most definitely in the affirmative, and a “so let’s proceed” from the drummer, White knuckle Ride starts and the hardest working cymbals on the circuit are praying for a let up. However, just before their second song starts, suddenly there is some tension from the band and the two aren’t happy. Someone has brought a tambourine to the gig (why?!?) and it is severely putting off the band. However, after a few invites onstage to join the band and a quick glance from security, Tambourinegate is averted and Live Like An Animal launches. Fan favourite The Hunter is quickly dispensed with and the venue’s foundations are rumbling. Both band members stare at the crowd, seemingly daring and egging them on. By the time the (fantastically titled) current b-side In Dog Years, You’re Dead’ gets an airing, Holman’s shirt is off and he’s dripping with sweat. A quick foray into the crowd and we all get a beautiful pissed up rendition of Lionel Richie’s creepy Hello from an eager female fan. A further exchange initiated by Vincent wants Blackwood to choose their favourite biscuit. After a quick opinion poll, the Bourbon comes out on top. By the time Do Something and Socket’ are flung at us, both of them are topless and Slaves have the crowd in their sweaty punk soaked palms (just wash them before fingering the bourbons though yeah?)

Just before final song Hey, they wish the crowd well, “Look after yourselves. Because you look fucking hammered. Not all of you, but most of you”. Then with a front to back crowd surf, they are gone, leaving Blackwood to limp off home with a kebab and “you’re dead already!” ringing in their ears.

And as we get on our way, and get spectacularly lost once again, the Jilly Goolden in me starts metaphorically wine tasting the band. In Slaves I get the obvious notes of Sex Pistol sneers, late night taxi rank romances, Nirvana riffs, exhaust fumes, blackcurrants and tarmac. But I also get a pinch, a flutter, a waft of Carter USM intelligence and poeticism thrown in for good measure. These two have a great sense of humour and even greater tunes. And I can’t see Slaves fitting into venues like the Miner’s Institute for much longer. So well done to Velvet Coalmine then for catching them when they did!