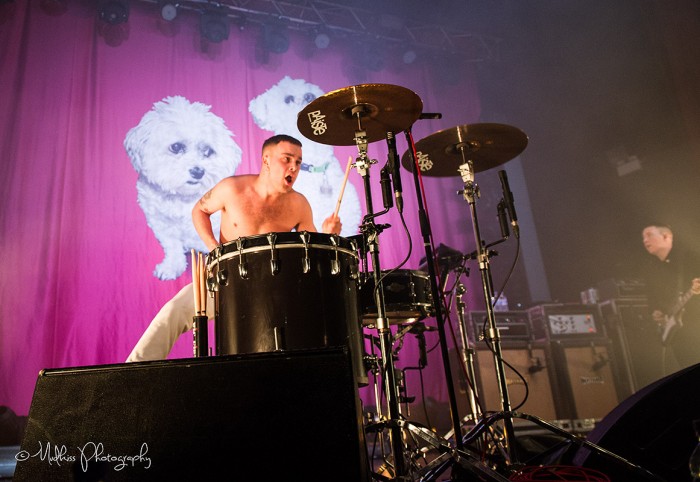 This first thing you notice is the atmosphere.

It’s drenched with an almost hysterical excitement and the steaming sweat of high decibel thrills – that kind of atmosphere that marks a band on the edge of great things. The whole dancefloor in the sold out second night at the1300 capacity Ritz is leaping as one and the sweat and thrills of a classic gig fills the ancient dancehall.

Slaves are further proof that music is indeed more than alive after a bruising week of pop culture death – the two piece of Laurie Vincent (Guitar/Vocals) and Issac Holman (Drums/Vocals) have been making a great racket for a couple of years and their debut album has just gone gold or silver or whatever it’s called these days.

Bouncing around the stage like duracell punk rock bunnies, Laurie and Issac are a couple of youthful de Niros who are in love with the big racket and have turned it into a thrilling, vicarious pop music and a soundtrack to the scuzzed up, 21st century, culture wars.

From Maidstone and the Medway they were fired by a love of hand me down punk rock that coalesced around Rancid and Tim Armstrong – the poetic, punk rock voice of yet another generation who opened the door for all kinds of lost souls looking for some sense in the noise. Instead of becoming yet another 4 piece punk rock band dealing in the same old template they, by the necessity of the lack of fellow travellers, turned themselves into a two piece – the economy version of rock n roll and the music at its most intense. This is the eyeball to eyeball of creativity and hands are pushed by lack of musical passengers. Somehow they turn this to their advantage. An advantage that is underlined by their live performance that makes the stripped down two piece fill the room with their roar of life and fills the stage with their dynamic stage show. 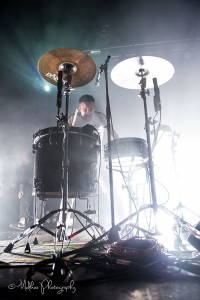 A back to front 2 piece – they are pushing their creativity to the max. Somehow Isaac sings all the songs whilst ending up on the micro drum kit whilst Laurie deals in the guitars. It should be almost hands tied impossible to make this work but they create a noise that fills the venue with an avalanche of electric possibilities and songs that are singalong without being trite, songs that tell a truth without being earnest and are kitchen sink drama in their black comedy and carry on Brit sense of humour. These are anthems.

In trad rock terms this should not work. This should be not enough hands spoiling the broth – singing and playing drums is a tough call at the best of times but Isaac turns it into a spectacle and manages to create a huge backbeat with just a tom and a snare and deals in the electric spectacle by leaping around and dealing his vocals out against the guitars and occasional bass.

You can hear all their post Rancid explorations in their sound as they took their punk rock journey after being sparked by the possibilities presented by the American punk crew. From Minor Threat’s short bursts of early eighties melodic teen angst to post punk’s willingness to explore and then through hip hop’s love of machine gun lyrics but especially in the melodic almost Blur like appropriation of the form – like Blur if it was two Graham Coxons.

Slaves have used their roots and remembered that punk, for all its sneering, belching and anger was actually a pop music and they have given the form an English take. An English take that is perfect in an old dancehall like the Ritz. From their accents to their subject matter to their delivery – this is punk rock back in England and back couched in terms of pop culture.

It’s also brimming with a diversity – there are moments of hip hop in the delivery but with a British delivery – that kind of word torrent the shopping list of micro worlds— that kind of cramming of the lyric that was always the best British reaction to that most American of forms. There are hints of all kinds of record collection moments and explorations from even left field dance to metal but always couched in their own sound which is basically the pounding drums and the thrashed guitar without it ever tipping over into a mess.

And the youth are lapping it up.

It’s a brilliantly excitable crowd on the second of a two night stint at the Ritz. You can really feel something in their air as the band own the place. They exude a confidence but not a hot air arrogance, they understand the communality of great guitar music and they are exploding with the energy of the moment.

They also write great songs that say everything in micro, small town – small life vignettes, moments and flashes in time, the potent scrapheap of human life – the kind of stuff that British bands have always been so great at – turning the mundane into magic – the scrapbook of human desire and modern life turned into noisy seat of the pants guitar pop.

Tonight is a triumph and sweaty proof of the vibrancy of the form. 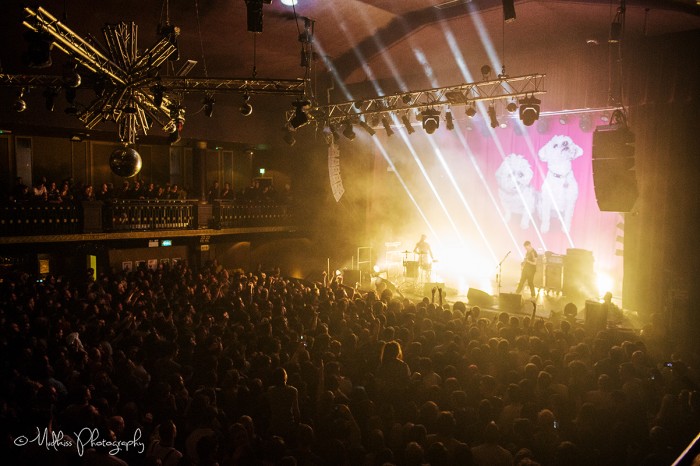 Use of these images in any form without permission is illegal. If you wish to use /purchase or license any images please contact mel@mudkissphotography.co.uk

Words by John Robb
All photos by Melanie Smith – Mudkiss Photography. More work by Mel on Louder Than War can be found at her author’s archive. You can find her on Facebook and Twitter. Photography portfolio can be found here: mudkissphotography.co.uk.