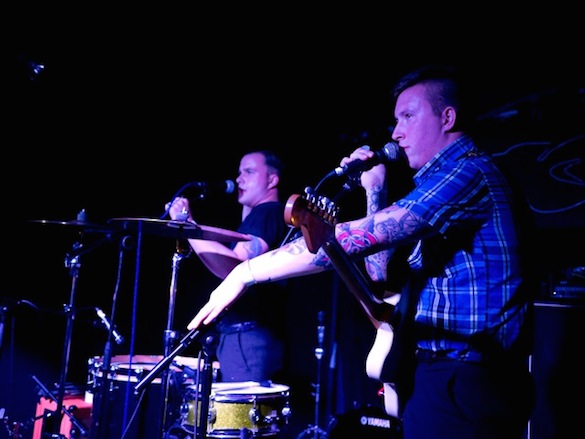 Photo of Slaves above © Terry Tyldesley.

Isaac has hopped offstage for the first of two hugs. His arm is wrapped around the shoulders of a delighted and decidedly drunken audience member.

“Mate. The car isn’t lost,” the singer/stand-up drummer struggles to explain, his face glowing with feigned condescension. “Debbie knows where she parked. We’re just walking her there because it’s dark, yeah, and we’re worried about Bigfoot. It’s just a story. A story we put into a song. So you don’t need to ask where Debbie’s car is, OK? It’s not lost. Yeah?”

To excited applause, Isaac rejoins his drums. But before he can click-start the next song a familiar audience voice splits the air, bringing the set to another halt: “Where’s your car, Debbie? Debbie where’s your FUCKING CAAAAAAAR!”

Such sloshed banter, when handled deftly, can be comedy gold. And big laughs like these are most certainly a cornerstone of any Slaves set. Whether that might be Laurence asking the sound engineer for more bass in his monitors (there is no bass player), or an audience vote on Jaffa cakes versus Hobnobs, it’s all hugely entertaining and a great environment in which to present funny tunes like the afore-described ‘Where’s Your Car, Debbie?’, the saucy ‘How’s Amelia?’ or the long-of-intro-short-of-verse ‘Girl Fight’.

But Slaves is a schizophrenic beast to be sure, and it’s often the angrier, more serious social commentary that best suits the beautifully-refined Slaves signature grunty sound. Not that this is anything like a one-trick act, you understand. New song ‘Okay’ tries to bring some Buzzcocks styling to the thunderous mix, perhaps signifying a slight diversion from the determined Fugazi/Killing Joke course that Slaves have generally set on pursuing. The glorious racket they make is really quite amazing. And, remember, this is just two guys, two drums, two cymbals, one guitar. Incredible.

The rumpus is a smash hit with the packed crowd. From the stall-setting opener of fidgety irritation that is ‘Nervous Energy’ through to the set-closing call/response classic of ‘Beauty Quest’, every second is gleefully sucked up. There’s a little offstage drama in the last song, when an official-looking photographer is hoisted aloft to crowdsurf his way through a flying photoshoot, the flash attached to his expensive equipment firing off shot after shot of his
airborne boot.

It was a suitably thrilling climax, but in truth the set had peaked one song earlier during ‘White Knuckle Ride’. While Isaac pounded his drums and shrieked his articulate points about 21st century communication breakdowns, Laurence throttled the life out of his guitar, wringing deathly screams from his Orange amps while ducking then leaping to articulate the absolute maximum level of captivating stage rage. Splendid.

Then, right at the end of the set, Laurence dived into Isaac and wrapped him in a vice-tight clinch – this was the singer’s second hug of the night.

From down here in the audience, that manhug symbolised the incredible closeness of these two pals. It underlined the intuitive flavour of the music and their captivating two-man personality.

This free admission end-of-tour party served as a stylish celebration for Slaves – they have just signed a major record deal, after all. But it was a sweaty toast to a brilliant future, too.

So let’s drink to that: to the fun and the fury of Slaves!