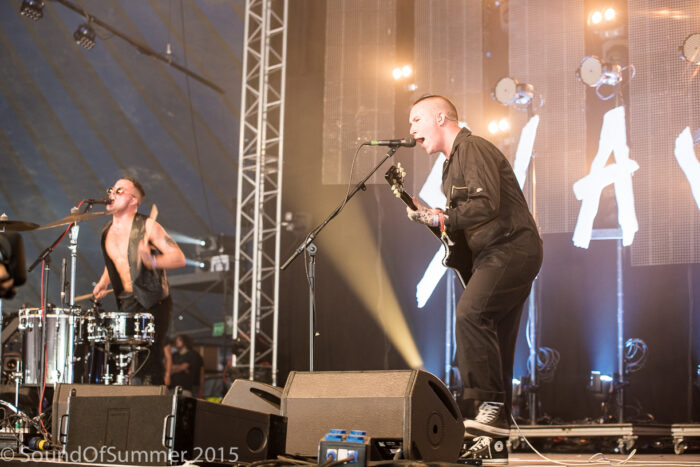 Slaves are a two piece garage punk outfit from Tunbridge Wells in Kent. Isaac Holman provides the percussion and the lion’s share of the vocals whilst Laurie Vincent provides the guitar and adds to the vocal ferocity. Louder Than War’s Alan Ewart caught their set at Glastonbury.

They may be a two piece but both live and in the studio, Slaves create a sound and energy that is indicative of a much bigger band.  When this year’s Glastonbury Line-up was announced I was delighted to see that Slaves had a spot on the John Peel Stage though I must confess I was a little bemused to see that they were performing at 2pm on Saturday afternoon.  As a result, despite having seen Slaves live a couple of months back, I wasn’t really expecting a set of the ferocity that was delivered.

We all know that Glastonbury is a hedonistic, 24-hour a day gig and by Saturday afternoon many of those who arrived on Tuesday or Wednesday are starting to fade a little.  As I made my way towards the John Peel Stage I remarked to my son that a lot of people seemed to be doing the same thing, especially given that the Waterboys were playing a blinding set on the Pyramid Stage and The Stripes were in full flow on the “Other Stage.”

On arrival at the John Peel Stage I saw that not only was it packed but there were thousands sat on the remains of the grass outside the tent.  I quickly took my place in the press pit whilst counting down the minutes.  As I watched more and more people crowded into the tent, there was tension in the air and you could feel the energy pulsing from the crowd as waves of energy swept the stage. 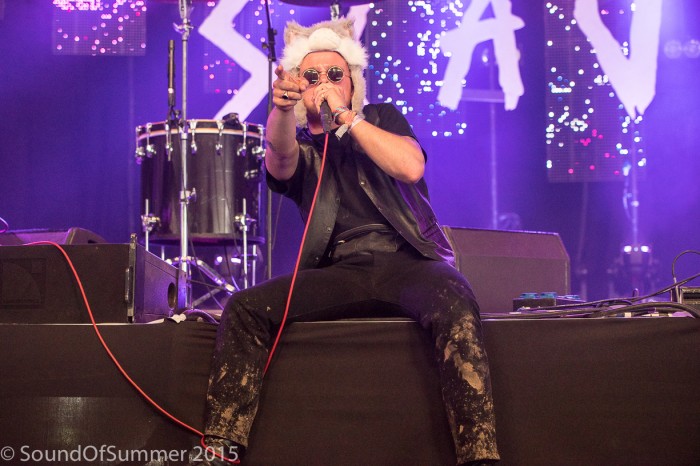 As the intro track began the crowd erupted, the noise was deafening despite my ear plugs.  You could sense that Isaac and Laurie felt it too as they emerged onto the stage in boiler suits.  As the boys swept into the opening number “Are You Satisfied” you already knew you were about to witness something special.

Slaves have bags of attitude, they have something to say and they are going to smack you in the face until you hear just what it is.  Just listen to The Clash like “Wow, 7am” and you will get the idea.  If you were looking to draw a comparison between Slaves and an old school punk band the Clash should be your first stop.  The big bluesy guitar licks, the attitude, the punk, ska, garage rock influences all come over loud and clear, but it is the energy that really grabs you.  A Slaves gig feels like a volcano about to erupt as the energy builds, increasing track by track until it is released in an explosion of sweating, heaving, bouncing, crowd surfing madness.

By the time the Slaves hit the single release “Feed The Manta Ray,” the madness reaches a crescendo with a guy running around the stage in a Manta Ray suit before he dives into the crowd and goes crowd surfing, he is quickly followed by Laurie, crowd surfing without missing a beat on his guitar.  Huge inflatable beach balls start bouncing across the crowd juggling for space with the numerous crowd surfers, the energy plateaus during a superb version of “The Hunter” and then suddenly, after finishing with “Hey”, their first single on Virgin records, its all over. 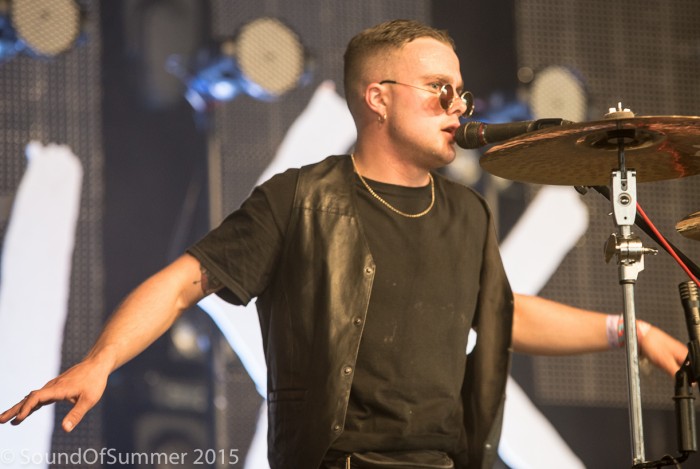 Slaves have just taken you on an 11 song, 60 minute, rollercoaster ride that left both them and the crowd simultaneously elated and drained.  Laurie and Isaac hug each other on stage.  The crowd stare at them open mouthed, bemused, drained of emotion and exhausted.  Everyone present knows that they have just witnessed a very very special performance.

Slaves may be a young outfit but they are going places and they want to get there in a hurry.  If you have any sense you will want to go with them.  Grab hold of Slaves, they are pure gold, their music matters and maybe, just maybe they are going to shake the UK music scene out of its current safe, “vanilla pop” torpor.  We may just be witnessing the birth of something very special.

Slaves are on the internet here, details of their current live dates are can be found here, They are on Facebook and they tweet as @Slaves.