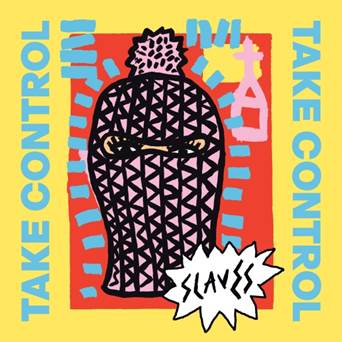 NEW SINGLE ‘SPIT IT OUT’ OUT NOW!

“Sucking on a sour sweet…SPIT IT OUT!!!”

Slaves strike back with ‘Spit It Out’, an explosion of punk-rock fury that trails second album, ‘Take Control’. The single’s simmering verses boil over into a chorus of red-flag anger, about apathetic early-twenty-somethings who moan about their lot, but refuse to do anything about it.

The hyper-motivated Kent duo of Isaac Holman (vocals, drums) and Laurie Vincent (guitar) have followed a spectacular 2015 by recording another hit album in waiting, at Jackson Browne’s studio in Santa Monica, California. ‘Take Control’, was produced by one of the legends of early hip hop and New York punk, Mike D who, says Laurie, “Became like another member of our band – we can safely call him our friend, which is just surreal!”

Mike D says of Slaves “There are a few things that got me excited about working with Slaves: First, a friend had sent me “Are You Satisfied?”. I feel right now the world needs an album like this. Something that is more raw, more alive and less polished. I was impressed with the band’s strong point of view. They actually speak their minds about social topics.

Second was the initial conversation I had with Laurie. There were so many influences he mentioned that I love – from the Gang of Four to The Cramps to The Damned to Public Image Ltd to The Slits and on and on. All records that I truly loved and I couldn’t believe he knew all of them so well for a person his age.

Third was getting rough demos from the band. The songs showed a lot of potential and I saw a clear role for myself in the process. I think the band just needed to be pushed a bit in terms of developing the songs further. It was very important to me to make a record that while not super polished, is not at all low-fi. When I go back and I listen to some of the U.S. hardcore records I love, I’m super disappointed by how poorly they sound today. I want it to be able to compete with any big sounding rock record whether it is Metallica or Slayer or whatever, but it’s important that it has the heart of a Black Flag record. Hopefully we’ve transcended that.”

‘Take Control’ finds the young pair sharpening up their skills, both in songwriting and in execution and sounding heavier in places. Several tracks on the album were recorded on vintage equipment used by the Beastie Boys on their classic records, including ‘STD’s PhD’s’, ‘Angelica’ and ‘Consume Or Be Consumed’.

Recorded back home in London, ‘Steer Clear’ was a collaboration with another hero, Baxter Dury, who lent his distinctive vocals to a duet with Isaac.

Slaves first emerged in 2012, working their way up through the local toilet-venue circuit to become one of the success stories of 2015. The band’s debut album ‘Are You Satisfied?’ smashed in to the UK top 10 and earned the band huge critical acclaim. Thanks to their charismatic mash-up of punky urgency and silly humour, they bagged Kerrang!’s Spirit Of Punk award and NME’s Best Video award (for ‘Cheer Up London’), while also securing nominations for the Mercury Music Prize, and for Best New Band at Q and NME.

Along the way, they’ve won the hearts of The Streets’ Mike Skinner, stolen the show on last year’s NME tour, had Skepta join them on stage at Radio 1’s Big Weekend and toured with Jamie T and Wolf Alice – the latter in America in March, after which Wolf Alice’s drummer, Joel Amey bunked off to California to play on new track ‘People That You Meet’.

Buzzing from their success, Isaac and Laurie weren’t content to sit back and lap it all up. “If you stop making music, you stop being relevant,” reasons Laurie, “so we just cracked on”. Kicking off with ‘Spit It Out’, which Isaac describes as a “hard-rock banger”, ‘Take Control’ will be released on 30 September.