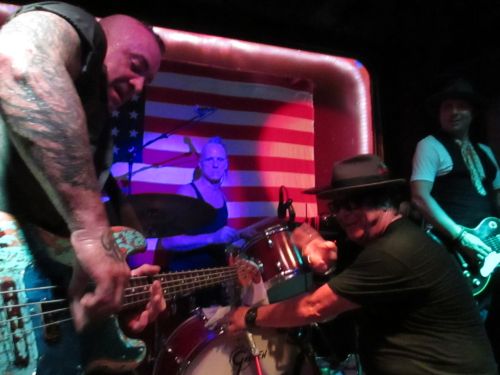 Throughout September and October, Manchester punk legends Slaughter & The Dogs performed their classic 1978 debut Do It Dog Style to packed houses across the USA. Carrie Quartly caught their 2nd Brooklyn appearance at The Grand Victory.

I hadn’t seen Slaughter & The Dogs since flitting between stages after A.T.V. and The Lurkers at Rebellion Festival 2011, so couldn’t wait to witness their high energy glam-infused punk again without worrying about conflicting set times or whether or not I should brave the communal toilet and the goonishly gurning bare buttocks displays that usually greeted me there (it’s punk rock, innit?).

The first band on the bill was the aptly named Drunken Rampage, who I vaguely remembered from an earlier Zero Boys show where I lost my shoes and woke up at home the next day covered in dirt. The pointy projectiles of singer Simon Trolley’s hair makes him look like he got on the wrong end of a porcupine, and the songs are your standard fast-paced punk fare but nonetheless fun, the most memorable tune being an ode to abdominal fat called the Beer Belly Bop. 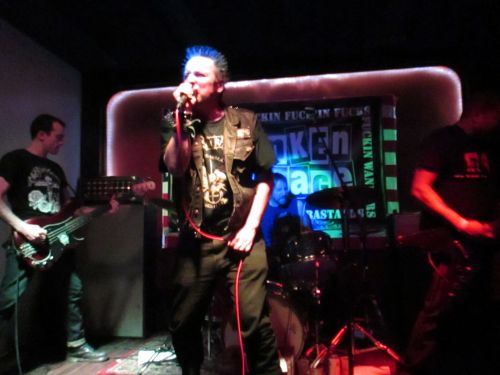 Up next was Shocked Minds, mostly a bunch of guys who came to NYC from Atlanta and just never left. I remember rushing off to Death By Audio after a friend’s art show on the Lower East Side to watch them for the first time in July 2013 because I was really excited to see an ex-Carbonas band, and I haven’t yet been disappointed. They look like The Rogues readying for an all-or-nothing knives out street rumble in their denim vests and premium leather, and their skin is a living ink scroll of painfully earned tattoos. Cool image aside, what really gives Shocked Minds their impressive edge is how leader Josh Martin does not artlessly and sloppily stick to the same knuckleheaded power chord progressions that have become much maligned clichés of the genre; there is more thinking and more finesse in his playing, so it feels like they genuinely mean it and aren’t just going through the motions. Plus they cover The Eat, so they definitely know their stuff – if having ‘punk credentials’ was ever an actual thing for anyone to be concerned about (it isn’t). Tonight they experienced a few technical setbacks which prompted calls of “You’re playing too hard!” from the crowd, but that didn’t slow them down too drastically. In any case, drummer Kirk Podell once told me a punk set should never exceed 20 minutes, and I didn’t time it like I teased I was going to, but Shocked Minds certainly don’t overstay their welcome! 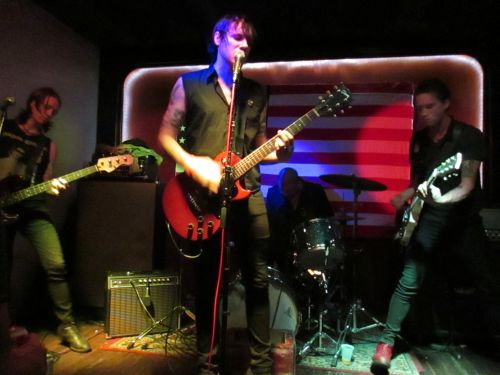 Slaughter & The Dogs arrive on stage more wizened but seemingly just as youthful in spirit as they were some 3 decades ago. Wayne Barrett is dressed like a Jimmy Cagney tough guy in dark glasses and a fedora hat, with a leather jacket draped over a CBGB t-shirt he told us he had to wear for the occasion because he “had a great shag in there once”. Mick Rossi looks just as sharp in his brown plaid waistcoat with a paisley scarf knotted around his neck. Bassist Jean Pierre Thollet and drummer Noel Kay are both sporting the traditional working-class punk style with Mohican haircuts and all-black attire. The songs of Slaughter & The Dogs are a great mash up of glitter rock’s escapism and the beery yobbishness of snotty street kids chanting from the football terraces, and I couldn’t help but shout along and punch the air as the whoah-oh-ohhs of I Got Your Number merged into their excellent take on Who Are The Mystery Girls? by The New York Dolls. For a band so enthralled with the New York scene (Velvet Underground and New York Dolls covers, Johnny T, Hell In New York), it seemed fitting for them to blaze through all their classics here in the city, despite however much the landscape has changed since its late 70s heyday.

The emphasis is on fun tonight, and the boorish climactic choruses of You’re a Bore and the metallic, churning riffs of We Don’t Care has me intoxicated with glee as other bodies hurtle into me while our mouths all shape the same defiant ‘fuck you’s (“We Don’t Care! No we don’t care, YEAH!”). The space heats up and the dancing becomes more turbulent; a few times I have to find something to hang onto so I won’t end up flat out on the stage in spumes of flying beer and sweat, but it’s a glorious, happy release that I so desperately need. Barrett announces that the next number is about sucking blood, and his devious cackle confirms their rapid launch into the unholy thirsts of Victims of the Vampire. 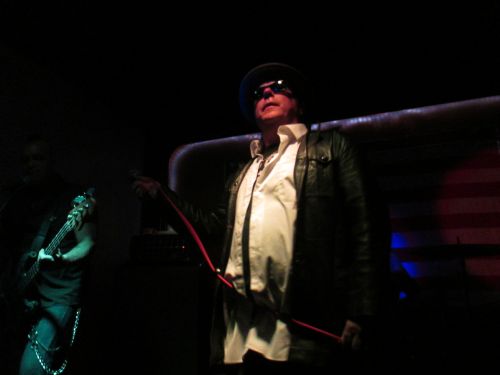 Slaughter & The Dogs remains a loud, fast and mean beast, bursting with uptempo aggression, and they blitz through more favorites like Boston Babies, Dame to Blame, and Where Have All the Boot Boys Gone? in quick succession. Rossi’s low slung guitar moves and wah-wah soloing are still a thrill to watch. Barrett bounces around or stands poised at the edge of the stage, occasionally sparring good-naturedly with a nearby female audience member. Later, he pats my head and says he likes fuchsia-haired girls. For the encore, they play a version of White Light/White Heat, and it’s one of several tributes to Lou Reed that were made throughout the show. They finish with Cranked Up Really High, which was dedicated to Barrett’s English bulldog Stitch who sadly died earlier that day, “because it was the only one that made him bark”.

Well it seems like these old dogs on stage tonight will never die, and can still bite pretty hard, too. See them if you can!