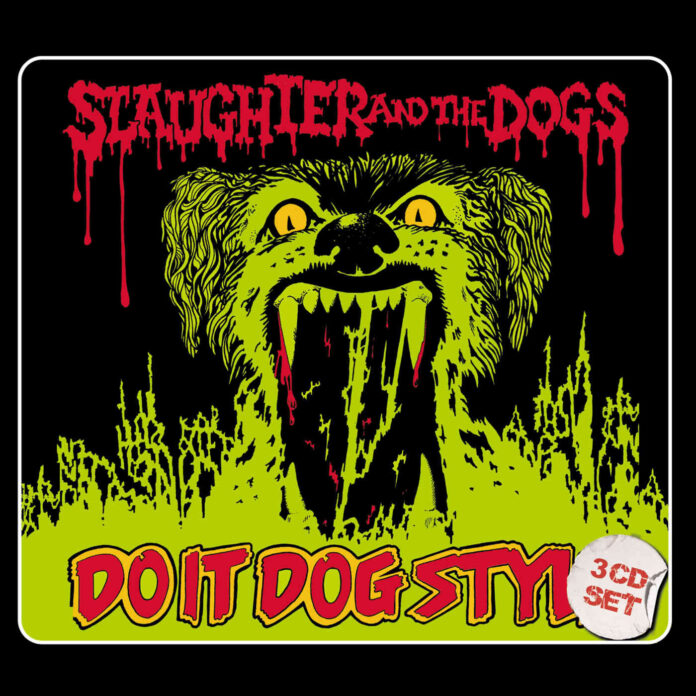 Slaughter And The Dogs – Do It Dog Style 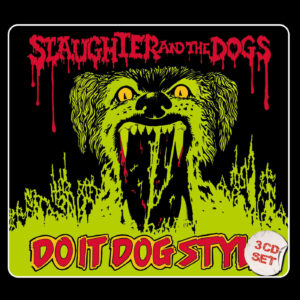 3CD set which includes Slaughter And The Dogs debut album, July 1977 in concert set Live Slaughter Rabid Dogs and the Cranked Up High compilation of early recordings….Ian Canty laces up the boot-boy DMs one more time…

Wythenshawe glam tearaways Slaughter And The Dogs were ready-made recruits for the punk surge of the summer of 1976, the street-honed boisterousness they already possessed was a natural fit. School pals Mick Rossi and Wayne Barrett assumed guitar and vocal positions respectively on the band’s formation in 1975. This pair encountered the two musicians that would form with them the “classic” Slaughter line up, drummer Brian “Mad Muffet” Grantham and bass player Howard “Zips” Bates, in the early months of the next year. The band were named after David Bowie’s Diamond Dogs and Slaughter On Tenth Avenue by Mick Ronson, which showed they wore their influences on their sleeves, but this new outfit would take that glam rock sound back to the street it originally came from.

The pivotal event in Slaughter And The Dogs’ coming together with punk was the Sex Pistols gig at the Lesser Free Trade Hall in Manchester on 20th July 1976, where the Dogs provided support along with Buzzcocks. A date that subsequently became legendary, it all went off amidst a good deal of bad feeling between the locals and their London visitors, but nonetheless it provoked Slaughter to fully engage with this new punk thing – meaning that these strays had found a home.

Jaunts down south to London the following year yielded spots on the Live At The Roxy album and in Don Letts’ Punk Rock Movie. Though they had undertaken a recording session back in May 1976 (which yields the first four tracks of disc two here), the initial fruits of their studio work made available to the public was a single on Tosh Ryan’s Rabid Records in May 1977 that paired Cranked Up Really High with The Bitch. This was a hugely popular record with punks nationwide and also represented one of the first production jobs of Martin Hannett, then billed as Martin Zero.

As the Dogs were clearly gathering momentum through their no-nonsense approach and tough live act, the logical step was a live album. A set was taped by Rabid at the Elizabethan Rooms Belle Vue Manchester on 9th July 1977. This was belated released in the winter of 1978 as the Live Slaughter Rabid Dogs LP and this live recording makes up the third disc of this new collection. Shorn of the two single tracks issued also by Rabid, this outing includes nine early versions of songs that ended up on Do It Dog Style (We Don’t Care is also reprised as an encore). The atmosphere evoked here manages to capture the veneer of murky mayhem that tended to be present in the 1977 punk happenings that took place far away from the swinging London hype.

The album joins the Dogs apparently mid-show, where after a meaty take of You’re A Bore they show a disregard for the Year Zero idea as they chuck a bit of She Loves You on the end of Mystery Girls. Despite rallying against some “jealous fuckers” in the crowd and at one point demanding the audience refrain from throwing glasses, Slaughter and the crowd appear to be having a good night. It’s a rough recording with the bum notes remaining in, but that is all part of the charm. When they bring the curtain down finally with another spirited run through of We Don’t Care, Live Slaughter Rabid Dogs feels like an authentic 1977 punk experience.

After the success of the Rabid single, Slaughter were snapped up by Decca Records, desperate for a bit of punk action. A big player in the 1960s thanks chiefly to signing up the Rolling Stones after passing on the Beatles, they were very much a diminished force come 1977. Somehow they ended up with a roster that in retrospect resembled a “Fantasy League” punk line up. Adam And The Antz, Cock Sparrer and Slaughter And The Dogs could have conceivably turned around the company’s fortunes in the punk years with a bit of luck. However, none of these acts sold many records during their stays at Decca for a variety of reasons, including problems with promotion and distribution.

The Dogs’ first record for the label was the Where Have All The Boot Boys Gone?/You’re A Bore single, issued in the late summer of 1977. Although instantly memorable and having just the kind of rough and ready attack to do well at the time, this disc only made a limited impact. Dame To Blame/Johnny T. followed on 7 inch in November 1977 and despite some good attributes met a brick wall commercially. For their last Decca single they went all out with the Kasenetz-Katz cover Quick Joey Small. This bubblegum song had plenty of appeal, but again it went nowhere. Whilst their peers the Pistols and Clash climbed the higher reaches of the national charts, the Dogs were floundering a bit. Undeterred the band set about recording their first studio long player.

Taking record company difficulties to one side, the much-reissued debut album Do It Dog Style is a bit of a gem and it is this album that has pride of place on the first disc here. With a couple of guest spots from the Dogs’ hero Mick Ronson and Nick Tauber on production duties, a certain amount of glam influence comes shining through on an entertaining selection. All three singles feature and Do It Dog Style starts out in a hard-hitting fashion with Where Have All The Boot Boys Gone?. I’m Mad, You’re A Bore and We Don’t Care catch them at their hooligan punk peak and there’s the oddity of having a Spider From Mars play on a New York Dolls’ song on Who Are The Mystery Girls?, with Ronson also playing on Quick Joey Small.

Keep On Trying finds their glam roots showing and the more reflective rock of Since You Went Away (something of an irony in the lyric, considering the sorry tale of Slaughter in the past couple of the years) doesn’t really play to the band’s tough-nut strengths. But Roxy Club classic Boston Babies and Victims Of The Vampire are suitably manic and overall Dog It Dog Style is a not at all guilty heap of punk rock pleasure.

Unfortunately when the album reached the stores there wasn’t a band left to promote it. The Dogs had split up just before the vinyl hit the shops and thus Do It Dog Style had any momentum pulled out from under it. Rossi and Bates formed would-be teen heartthrobs the Studio Sweethearts with Phil Rowland from Eater and Billy Duffy. A year later they reactivated the Slaughter name, retaining Rowland and bringing in Nosebleeds’ singer Ed Banger for the Bite Back album in 1980. Various splits and reformations have occurred over the years, but the songs that made up their first album and associated singles have always formed the backbone of their live act, with the “foaming at the mouth” hell-hound sleeve design their most well-know visual signature.

Sorry if this has been a bit back to front but finally we reach the second disc of this set, the Cranked Up Really High compilation. A selection of live tracks, singles and demos appeared on Captain Oi in 1995 under this name, but what is presented here isn’t in quite the same form as it was previously issued. This disc starts with four songs from the May 1976 session, later released as an EP on TJM in 1979. It’s Alright is really straightforward 12 bar rock & roll and Edgar Allan Poe one of their occasional forays into the gothic. With UFO another rocker, only Twist And Turn really has a spark of the new. Next comes both sides of the Cranked Up Really High single, which is of course great and this is followed by the Live At The Roxy tracks.

A selection of demos, lo-fi live cuts and studios tracks complete the disc, with the only really “new” offering from the previous Cranked Up Really High comp being Quick Joey Small flipside Come On Back. This is a fun enough collection with the very catchy pop/rock of Situations somewhat of a missed opportunity, being something could well have been a hit if it was released at the time. The Fight is sufficiently punchy and raw and this disc ends with a couple of pretty leaden demos of Boston Babies and I’m Mad.

This set doesn’t really have anything a big fan of the band wouldn’t already possess, but for the less committed the Live Slaughter Rabid Dogs LP hasn’t been available for some time and is well worth a listen. Do It Dog Style is full of melodic-filled vigour and if you’re not familiar with Slaughter outside of their debut, there is a fair amount of interesting stuff on the Cranked Up Really High compilation. Slaughter And The Dogs, through their many reformations over the years, have never come close to matching these early tunes, so Do It Dog Style is really their best.