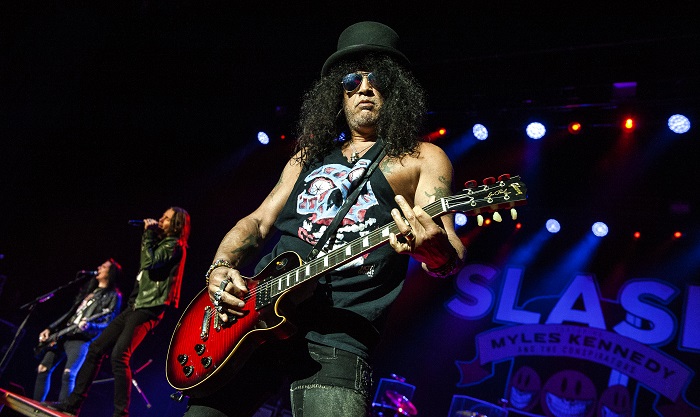 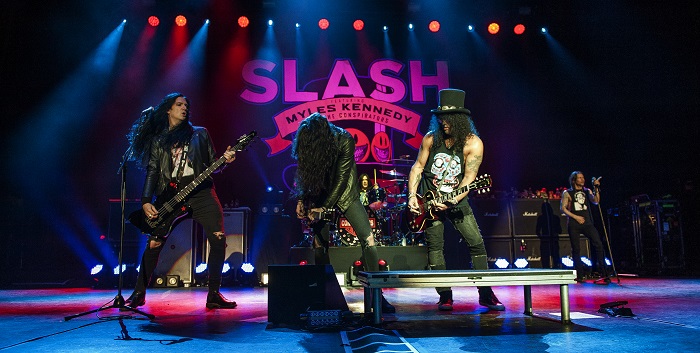 Four UK dates on the Living The Dream tour kick off in Manchester. London, Glasgow and erm…Doncaster – watch out.

But first, a bonus for early arrivals with Phil Campbell & The Bastard Sons support slot making tonight’s entertainment  a decent hard rock double bill. Phil can’t quite shake off his Motorhead association just yet; his band’s set suitably punctuated with a Born To Raise Hell and an Ace Of Spades, delivered with wildly boyish enthusiasm by Neil Starr and Phil’s three lads. The man himself  remains very content to be as much as part of the band as possible despite his name being the bait, often hidden in the dark to one side or unlit as he took a step forward.

The Age Of Absurdity album has had chance to work its way into the consciousness and tracks like the very Motorhead-esque Ringleader, Freak Show and Get On Your Knees (cue some well managed and enthusiastic audience participation) are going to define his post-Motorhead direction and to be fair, went down very well. He’s a well respected and self effacing bloke  with few airs and graces, plenty of well meaning middle fingers raised in celebration – and a well considered choice to open the evening. 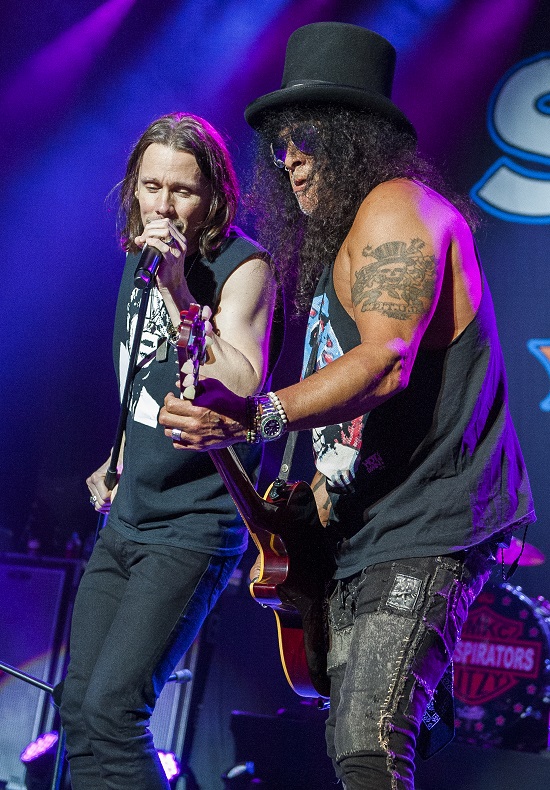 I guess Slash is pretty much the same. It’s his name on the ticket and emblazoned across the backdrop; Myles Kennedy and The Conspirators are also there yet in  smaller fonts so there’s no doubting who’s the star. What’s gratifying though is that Slash now has  enough under his belt to be able to avoid  any crowd pleasing diversions into the G’n’R catalogue bar a dip into Night Train and to these ears, when Ghost kicks off early on in the set, that’s enough reason for us all to be here. To be truthful we’d probably all be satisfied for him to just  turn up in his mirror shades, top hat and Les Paul; a row of toys lined up across the top of the Marshall (what else?) stacks. “There he is!!!” I heard a female fan scream in excitement even as she spotted him in the wings during the intro music. Throwing the shapes for which he’s famous, cranking out the riffs and the solos packed with sustain, Slash IS rock and roll.

Oh yes, the icon that is the topper – at the old Railway pub/music venue  in Bromley Cross, they never had a star or angel on top of their Christmas tree; it was Slash’s top hat. Now that’s fame (or infamy) and with Myles Kennedy (or depending where you stood in relation obscuring parts of  the backdrop,  Les Kennedy) a much more reliable and consistent frontman to his better known alternative former partner in crime, you can be sure of prompt starts and a wholly professional performance and none of the cheap thrills that come with the prospect of something ragged and shambolic.

With bassman Todd Kerns equally at home to playing the crowd and taking on a couple of lead vocals, to be perfectly frank,  Slash and whatever collaborators he opts for are a far better option than the (surely not again in this lifetime) G’n’R circus. A bit like Phil Campbell, Slash may be living the dream, but to be in the same room as the man whose status is a bonafide  living legend, the Apollo crowd were pretty much living their dream too.