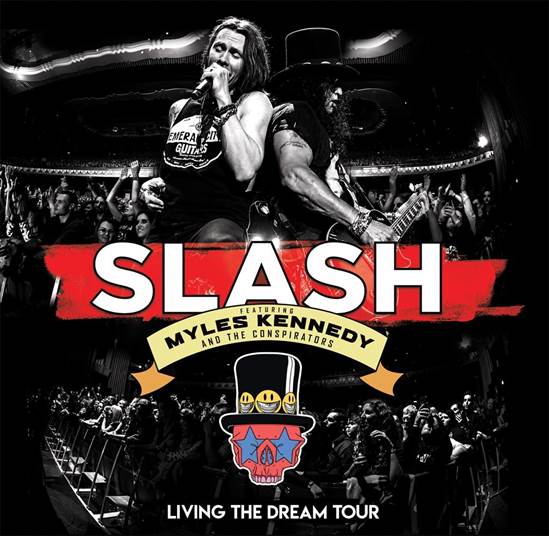 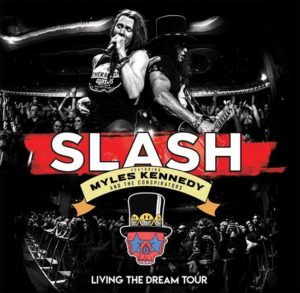 Slash tears up Hammersmith Apollo with staggering solos while dropping giant slabs of riffs with casual ease, delivering the essence of rock ‘n’ roll in this show. You could see it, hear it and feel it. “Every night is chasing that magic and when it happens, it’s euphoric,” Slash states. “I just love it…London kicks ass”.

Fresh from a hugely successful tour with recently reformed Guns N Roses, Slash has joined forces once more with Myles Kennedy and the Conspirators for his fourth solo album, Living the Dream, and a subsequent tour.

In February this year excited fans poured into the Eventim Apollo (formerly the Hammersmith Apollo), a small venue compared to the sold out stadiums Slash has been playing with Guns recently, it promised to be a special show and he certainly didn’t disappoint.

The Living the Dream Tour DVD and CD captures the intimate atmosphere in the legendary London venue. With Slash’s flawless fret work, Myles Kennedys sensational vocals and the solid backing of Todd Kerns, Brent Fitz and Frank Sidoris its safe to say that despite their recent hiatus Slash’s solo band is still on top form!

Blasting though twenty-two songs; seven from the new album, fourteen from the last three and the Guns N Roses classic, Nightrain, thrown in for good measure.

.If you caught this tour, then you’ll know this is essential viewing and listening: and if you didn’t, well, it’s even more essential you get hold of a copy.

All words by Adam Hall for Louder than War