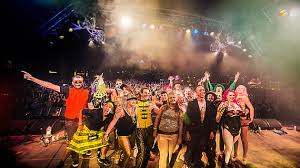 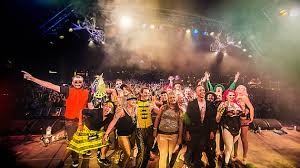 In a whirl of fluffy toys, furry beasts and furry beats, semi naked dancers and jiving musicians Slamboree have brought the party to Beautiful Days. Their music is an enthralling pot pourri of influences from the huge enveloping beats, drum and bass skittering around the arena and into this boom bass beats sound system of brilliance are mixed balkan beats and melodies and the spiralling sounds of the east as well as a throbbing dub bass and a mystic ooze all combined into the perfect party jam

If you were going to design the perfect festival band this would be it. There is nothing self conscious here. This is not introspective indie but a full on no holds barred circus cabaret extravagant that really rocks. There are so many of them on the stage from the extravagantly dressed musicians to the near naked fleshy girls covered in the goosebumps of late UK summer and dancing that crazy eternal groove that they mesmerise with their kinetic action.

Constructed by mike Freear in 2011 who gathered up an army of great players and extravagent dancers Slamboree grew on its terms – like a travelling army of vagabonds and gypsies. Every wanted to join this thrilling circus and as the hand puppets and the furry creatures dance and the buttocks wobble to the bass heavy beat the singer delivers the songs with her powerful voice as she nails the vast array of seething sounds behind her of the boom boom boom breakbeat, dubstep, drum & bass, dub, techno and electro fused with balkan, folk, and ‘gypsy’ music.

All this would be a bit pointless if they couldn’t back it up with their tunes and they even have that bit worked out as well. There is a real huge power to them and all enveloping warmth of humanity and joyousness as they combine every perfect festival moment and every perfect festival band from the last thirty years into one hour of built to thrill exotic madness.

There are so many for them that its pointless trying to pinpoint who does what and why- like an army of dayglo ants they take over the stage in a well drilled thrill kill cult of excitement.

Slamboree – even their name says it all.