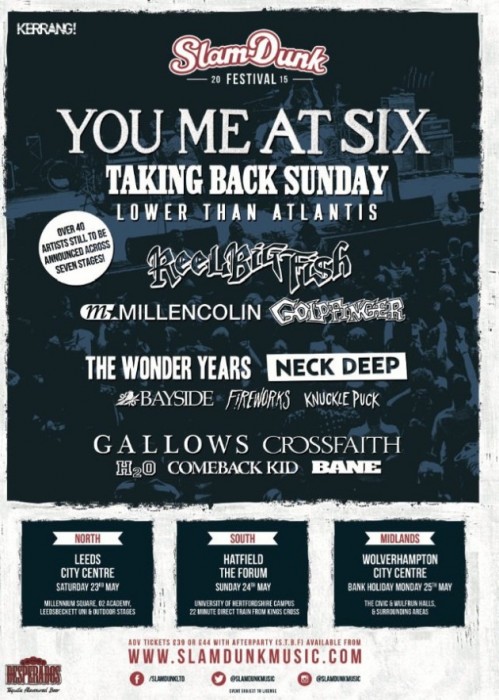 And the longer version…

Slam Dunk is a Leeds-based record label who, since 2006, have been holding festivals that started out primarily at the sadly missed Leeds Cockpit venue, before growing into its latest incarnation as a full on annual festival, held over three days at three different cities, theoretically giving the whole of the UK a chance to catch the cream of Slam Dunk Records roster, plus friends.

For one day, the whole of Wolverhampton’s city centre became the focal point for 7,500 revellers to come and enjoy their favourite pin-up pop / ska / emo ‘clones’, sorry… I mean bands. Thankfully, the festival is diversifying to include a DJ stage and in the ‘Impericon’ stage area, a refuge, for those who prefer their metal to be less about image and more about post-festival trips to a hearing specialist / chiropractor.

So, over on the main stages, you could see the likes of Don Broco, all posing and very pretty and formulaic (and there’s nothing wrong with that, people were lapping them up – pop music is necessary no matter what sub genre it falls into), but the majority of the fan base didn’t yet seem to have enough musical diversity under their belt to give any band that may throw a different musical bent a chance – why listen when you can ridicule.

Over on the Impericon stage, the day kicked off with Sheffield’s mighty Dead Harts, who did their very best to start the mosh, and somewhat succeeded. Showcasing their awesome Cult For The Haggard Youth album the initially moderate crowd treated the floor as a ‘try before you buy’ pit, knowing well that if they tried this afresh later in the day, they may be blood. As Dead Harts tore through their brief set, the pit grew into what became the standard for the day – fists, feet, concrete and chaos. Dead Harts made themselves a lot of new friends.

Californian hardcore titans Trash Talk took the stage bedecked in football shirts butI missed half of their set due to them constantly referring to themselves as ‘Prince’ (or something phonetically similar, my ears are somewhat mauled). They are a band that I constantly hear about but never actually get round to hearing. When someone pointed out they were indeed Trash Talk pissing about, I popped back along to catch the last half of the set. They drew the biggest crowd of the day with their angular hardcore, displaying a ferocity that justified their draw.

Next up, Bane, who came all the way from Boston Massachusetts and just irritated me. They’re a great band on record, but vocalist Aaron Bedard did too much preaching and came across hammy and scripted, which is a great shame considering that Bane are touring their last album; an album that offers much more sincerity than shown during this preach-heavy set.

Next catch was Mariachi El Bronx, who were just totally and undisputedly brilliant from start to finish. Their music is so joyous and full of life that the packed out Wulfrun Hall was absolute putty in their hands. A killer opening hat-trick of Right Between The Eyes / 48 Roses / Cell Mates turned the metalled-up throng into a riotously fun Salsa Pit. THE highlight of the festival, and one of those bands everyone should try and get to see at least once.

As evening dawned on the Fresh Blood stage, the realization that all hell was about to break loose dawned on some very concerned looking security and punters alike. Baby Godzilla have well earned their reputation as an insanely chaotic and ludicrously dangerous live band. Many of the people here to watch their set hadn’t a clue about what they were about to witness. Within three minutes, utter carnage had taken hold, cuts, bruises, twisted limbs, all during the opening track. Most of the audience were at this festival for melodic pop punk, and they frankly could not get their head around Baby Godzilla’s splendid hardcore chaos.

At one point early on into the set, one fella approached the mic (which, of course, was to be found absolutely nowhere near to a stage) to bawl “you guys are a bunch of fuckin’ posers”. Guitarist/vocalist Jonny Hall retorted with brilliant deadpan wit “Thank you to that guy with the ponytail” as the band blazed into The Great Hardcore Swindle, four minutes of absolute fury. Take the focus away from the chaos the band seem to summon around them on the live arena and their music is some of the finest, thunderous hardcore this country has produced, bar none.

After Baby Godzilla, I tried to check out Gallows, hot on the heels of their latest album Desolation Sounds, a brilliantly melodic and elegant punk album. I did manage to see a man fully dressed as a wizard, complete with long beard, crowd surfing towards vocalist Wade MacNeil, however, after Baby Godzilla a rest was needed. Maybe even a cup of tea, a foil blanket and a chat with a therapist.

Headlining the Impericon stage was The Bronx who displayed all the energy and passion of their mariachi counterpart, yet not quite so joyous. The Bronx do rock and roll bloody perfectly though, front man Matt Caughtran out in the crowd (somewhere in middle of a very narrow road geeing everybody up like a literal Manic Street Preacher) as guitarist Joby J Ford plays his heart out up on the stage, every bit as cool as Josh Homme, but somewhat more enigmatic. The Bronx’s set makes you feel like the biggest underground band in the world are throwing a street party just for you. The cool kids may be in another bit of town, ‘na-na’ing’ along to You Me At Six, but for real heart and soul, The Bronx nail the spirit of underground punk/rock music perfectly.

All words by Christopher Lloyd, find his Louder Than War archive here.