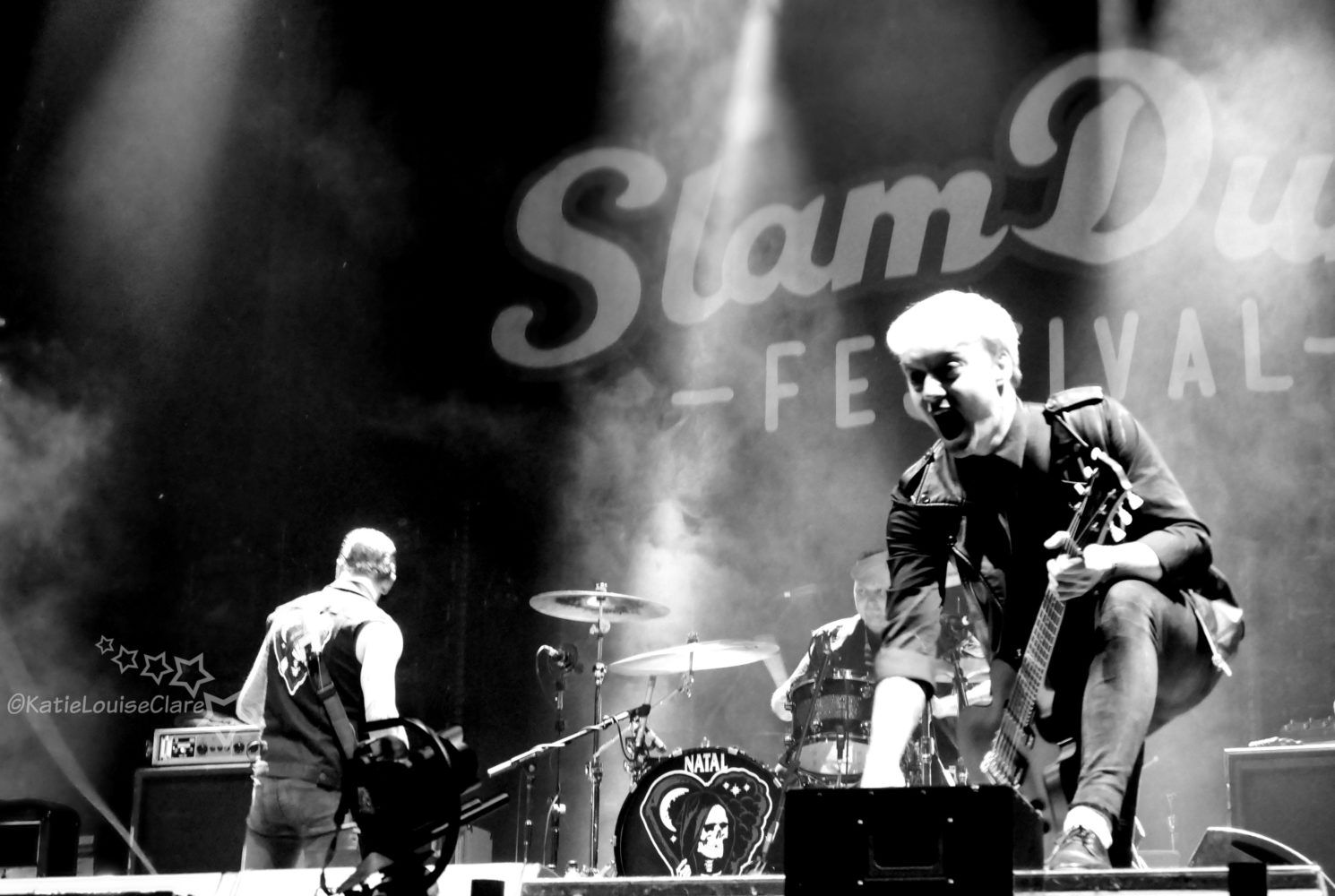 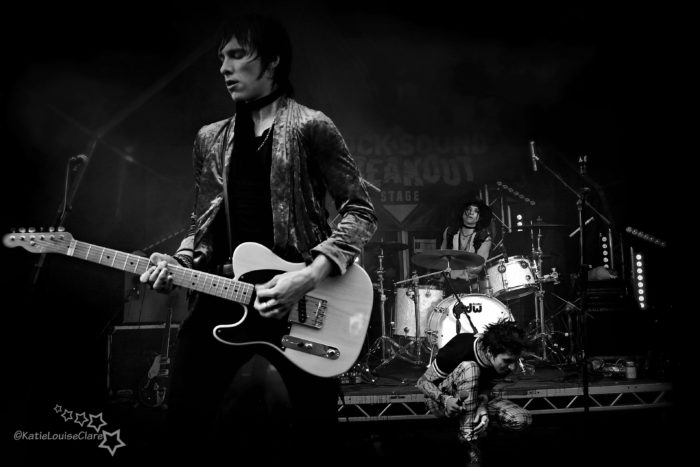 Slam Dunk Festival has travelled its way to the third and last destination: Midlands at Birmingham’s NEC and Genting Arena.

Louder Than War’s Katie Clare fresh from Slam Dunk Festival North travelled south to see how things went down in Birmingham reporting back on some of the bands seen.

No one wants to start an event or festival via a bus replacement service however that was the reality and getting on with it was the only option. At least the rain continued to hold off, and the sky was working on turning blue as waves of people made their way into the NEC from numerous entrances. Pooling somewhere in the general vicinity of the Genting Arena, I’m guessing that’s where it was as almost the whole of the NEC looks like every other part of the NEC. 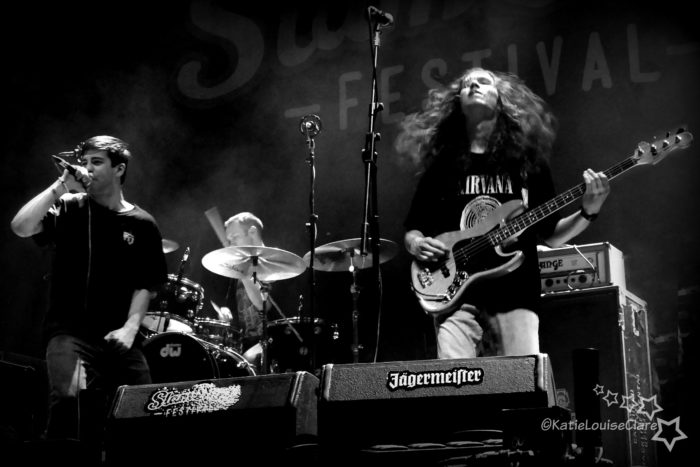 Most of the festival attendances were slowly filtering through the holding area, while those who had past security scattered in all directions heading to bars, merch stands and stages. Heading to the further point within the complex the Jägermeister Stage. The opening trio was so excellent in Leeds it is decided to revisit Knuckle Puck, Four Year Strong and Creeper once more and they did not disappoint. 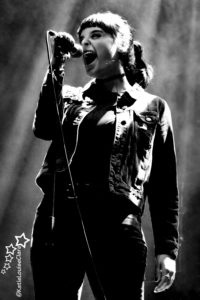 Four Year Strong setting the Midland audience into a crowd surfing, circle pit creating a frenzy that continued through their set and throughout Creepers too. The security staff only being given a breather during Crickets and the start of Hiding With Boys. Throughout the whole of Slam Dunk, the front of stage staff have, in my experience, were almost all amazing. Looking after the audience and catching all who were catapulted, or barrel rolled their way over the barrier.

Rock Sound’s Breakout Stage: Greyscale
Common themes of loss and love, the loss of love and coping with loss are the recurring themes it seemed in most Greyscale tracks. All delivered in a neat pop-punk revival package. Okay, that sound way more cynical that it should as actually what Greyscale create really does connect on an emotional level with the listener: their songs are a lyric narrative allowing the audience to draw from them in a positive way. Greyscale’s set is an interesting one that feels purposeful and levelled making them definitely a band at the start of a creative future that is looking to be thought-provoking as well as engaging.

Impericon Stage: Crown The Empire
There has been an impressive shift in vocal stylings for Crown The Empire since the departure of Dave Escamilla. Impressive because it added new qualities and a more melodic slant to certain tracks. Plus, Andy Leo is an authentic spirited singer and performer who still brings that energy to heavy hitters in the set such as The Fallout and Voices as well as the clean textures needed for Memories of a Broken Heart. A compelling set delivered by impressive musicians … performers: yer whatever, I’m not getting into that debate.

Rock Sound’s Breakout Stage: Milestones
Check out my hometown band, Manchester’s own Milestones offered up a set dominated by their pleasingly spliced mix of dynamic rock and spirited pop-punk. Matt Clarke delivering considered lyrics and likeable refrains while Mark Threlfall and Eden Leviston (bass and guitar) tempt gravity on the tight stage despite all physical efforts to spin off it. 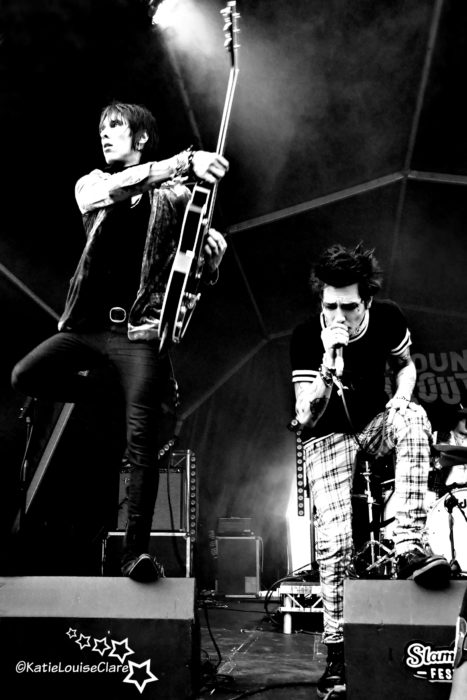 Rock Sound’s Breakout Stage: Palaye Royale
After their set in Leeds, a mere 48 hours ago, nothing less than a shared headline performance from Nirvana (circa 1990) and My Chemical Romance (circa any time at all) would have compelled me to miss Palaye Royale’s headlining set today in Birmingham. Could the brilliance experienced Saturday night have been a delusion, a spirit induced illusion: maybe perhaps a daydream.

The stage is hidden by a huge Dada Movement inspired banner which is dropped as Emerson Barrett thrashes a heartbeat intro and Sebastian Danzig strikes that first E chord on his Gretsch to Don’t Feel Quite Right and we’re instantly engulfed with the masses of sounds and sights being thrown at our senses. All this before Remington Leith has set foot on stage or sung a note. Don’t be under any misapprehension that you have any control. This is Palaye Royale’s stage, in fact, the space to the sides, above and in front is theirs too. This is the unwritten agreement exchanged for the staggering thrill ride that they are taking you on. It might only be nine songs long but hell no you won’t forget it.

At varying times both guitarist Sebastian and Remington leap from the stage on to the barrier. Remington going one further, heading into the audience during their cover of My Chemical Romance’s Teenagers. He immediately has everyone bouncing along joining in word for word.

Palaye Royale’s passion is infectious and bewitching and we are the witness to the physical manifestation of the music they craft on stage. Including an abundant of writhing both horizontal, vertical and in the rafters and many other fascinatingly enjoyable activity. Mischievous and feisty Palaye Royale may be, they are also courteous and kind thanking security and speaking to everyone who wanted to speak with them. So, it was all real and Palaye Royale again took my very breath away.

Slam Dunk Festival 2018 wraps for another year as the confetti cannons and flamethrowers of Good Charlotte’s set expel the final flying streamer and the last glowing flicker expires … we are already thinking just a little bit, I believe, of the next one already.

Slam Dunk Festival 2018 Midlands Live Review by Katie Clare. More news, reviews and interviews by Katie on Louder Than War can be found at her Author’s Archive. Katie can also be found on Twitter where she tweets as @tokyo_katie. Also, Katie can now also be found on Instagram as tokyo_katie_captures this new feed is devoted to captures from shows past and present.

Photographs by Katie Clare. Please note: Use of these images in any form without prior permission is prohibited. If you wish to use, purchase or license any images, please contact Katie Clare via Louder Than War.