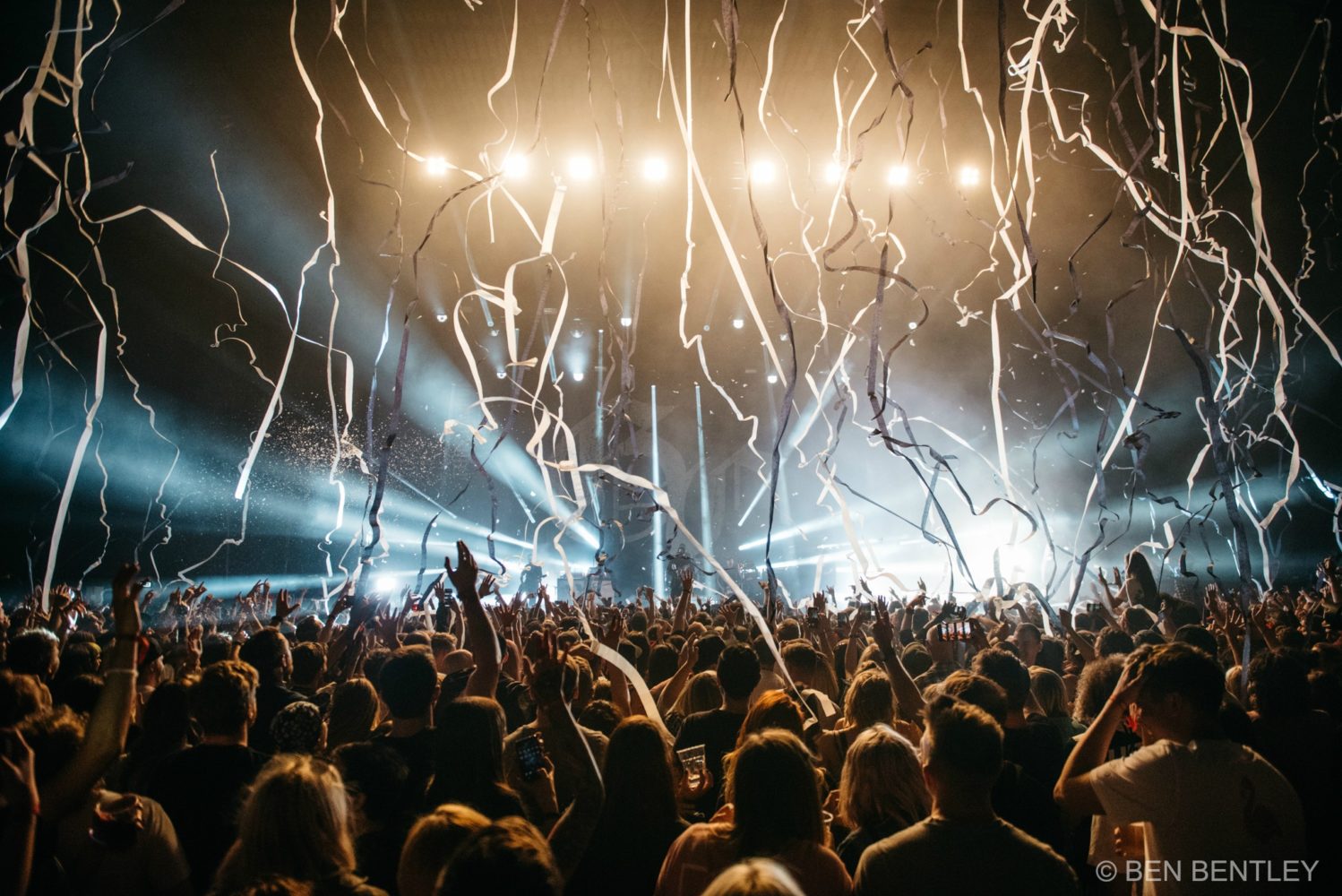 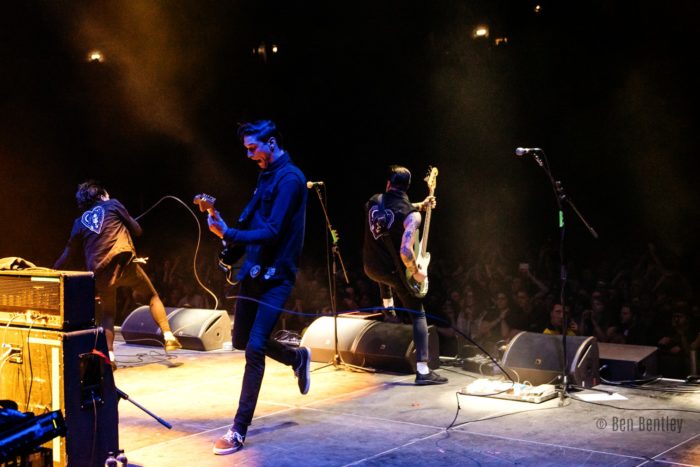 Slam Dunk Festival is back and this year it is bigger and louder than ever, going from strength to strength this one-day festival continues to grow each year. While other festivals have failed, fizzled and fade out around them Slam Dunk continues to deliver. Providing nearly a dozen stages and events with more than 60 bands and artists, who span the breadth of rock music genres, all in just one day within several venues in Leeds City Centre for less than £60.

Louder Than War sent Katie Clare along to this Slam Dunk Festival North and Midlands to see how the party went down this year, taking along music enthusiast Devika Shah too so we could report back on more of the bands appearing.

At first, there is a conscious air of annoyance around the Slam Dunk site, cancelled or delayed trains, queues and schedule clashes are among the topic’s being hashed over in pockets of friends. The sky over Leeds City Centre is a cloudless bright blue, sunshine beaming as a flood of brightly coloured hair, band tees and black jeaned masses throng among Leeds regular Saturday workforce and shoppers walking to and around the temporary Slam Dunk village; from Victoria Gardens at Millennium Square, to Leeds Beckett Students Union and The First Direct Arena.

As the gates open the excitement and expectancy win out, smiles are seen all around as people run and skip in flurries to stage barriers or stand to squint at tiny maps, gathering their baring’s. I head off to the darkness of The First Direct Arena and the Jägermeister Stage while, Davika Shah, my co-reviewer this Salm Dunk weekend heads to Beckett Student Union for Rock Sound’s Breakout Stage.

Katie at The Jägermeister Stage: Knuckle Puck
Boston’s Knuckle Puck kick off, my, Slam Duck with an energetic fun packed set full of expertly delivered pop punk. A sizeable audience were quick to participate as the first wave of crowd surfers were going over the barrier before the end of opening track Gone.

Davika at Rocksound Breakthrough stage: Holding Absence
Easily one of the most underrated bands on the lineup Cardiff’s Holding Absence took to the stage delivering such a breathtaking performance, leaving the crowd wanting more!!
Drawing in quite a crowd of people eager to hear what the hype is about and fans ready to sing their hearts out. The hype is real. Heavy instrumentals coupled with Lucas’s ability to change from soft transcending vocals to those of such pain and sorrow took the audience on a roller coaster of every emotion possible to feel. One minute there’s a little mosh going on the next there are tears being shed this band truly has so many aspects that draw you in you’re already planning the next time to see them! Don’t sleep on them.

Katie at The Jägermeister Stage: Four Year Strong
The changeover has taken a little bit longer than the audience, which has certainly grown, could maintain their adrenaline for. So it’s perhaps a quieter response as Four Year Strong start their set with We All Float Down Here than expected. It does not take long for the momentum to return. The audience indulging with delight in every unquestionably catchy chorus Four Year Strong provide and whip up a sizeable circle pit in gratitude. An expertly delivered performance ends with the deliciously brilliant It Must Really Suck to Be Four Year Strong Right Now and Wasting Time: Eternal Summer.

Devika at Rocksound Breakthrough Stage: The Faim
Perth based pop-punk band The Faim exploded onto the stage opening with one of their most energetic songs. Greeted by a large crowd filled with fans that knew every lyric of every song despite the fact the band only have 3 releases out. The Faim quickly showing why they’re Australia’s next big thing with their high energy performance and Josh’s incredible vocal range!

Katie at The Jägermeister Stage: Creeper
Slam Dunk North two years ago and Creeper were playing the tiny side of bar stage at the Beckett Students Union. Scores of fans queue for a couple hours to unsuccessfully get in missing what was an exceptionally memorable and sweaty event. Slam Dunk take no chances for a backlash over the capacity for Creeper this time and with good reason the First Direct Arena is packed even the seating that has been patchy so far has filled up. Playing larger stages does not dilute the energy and passion that a Creeper set provides. It allows their intense energy to expand and connect with the audience with their performance more. There is a little less intimacy than those smaller venues, but Creeper does such a great job of recreating that connection, it’s not that far off.

Will Gould, displays Olympian amounts of energy, springs from one side of the stage to another emoting with every gesture and stance. Ian Mills, Oliver Burdett and Sean Scott spin and jump in an unspoken competition: who can take it to the next level. Dan Bratton on his riser is not only a central visual connecting all these elements together, his rhythm and pace kept everyone magnificently synched. Yet with all these elements along with the stage smoke and lights Creeper never once lose their connection between them and each member of the audience. Even all but Hannah Greenwood and Mills leave the stage for the poignant Crickets, the arena filled with heart squeezing poignancy, exquisitely delivered. 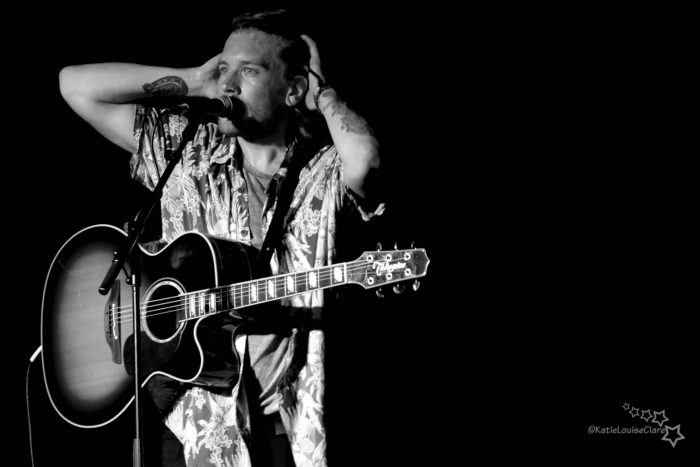 Katie at The Key Club Acoustic Stage: Rob Lynch (part set)
Rob Lynch provides effortless charm along with a number of tracks that sway between upbeat summer tales and unpretentious mellow rock ballads. The emotion that floods Lynch’s music is real and his performance is of the highest quality, so it is totally understandable why the audience today are transfixed throughout each song and why they show their appreciation so vocally at the end.

Katie at Rock Sound’s Breakout Stage: Chapel (part set )
An engaging duo providing rather unremarkable indie pop. They come across as agreeable people making friendly comments, thanking the audience and do put tangible efforts into delivering some life into their show. Ultimately there is nothing remarkable, about any of this background music for supermarkets and elevators.

Katie at Rock Sound’s Breakout Stage: Stand Atlantic
Providing thrashy pop-punk with classic choruses. Stand Atlantic maintain a strong start throughout however it is via a somewhat formulaic bunch of tracks. The band is competent and deliver a considered set, the songs from Sidewinder sounding particularly good live. It’s all decent enough Bonnie Fraser’s vocals, packing a bit of a punch, but overall there is nothing here to thrill.

Katie at Rock Sound’s Breakout Stage: Palaye Royale
First considering Palaye Royale on their releases, you’re plunged into some revitalized glam rock exquisitely cultivated, in varying measures with blues, indie and punk rock. They sound genuine, distinctive and appealing. However, there is … an almost intangible facet you can almost grasp at but can’t quite place it. That is until you see Palaye Royale live and it all becomes perfectly clear.

Palaye Royale’s polished sound live gains a visceral element that magnifies their vividness amplifies their metrical rhythm’s and expands the covetousness in their vocals. Palaye Royale’s set is a vigorous rock n roll adventure by way of dirty guitar’s sassy performances and firecracker filled tracks. You know it is an extraordinary show when you are so invested you forget to breathe. More, please! 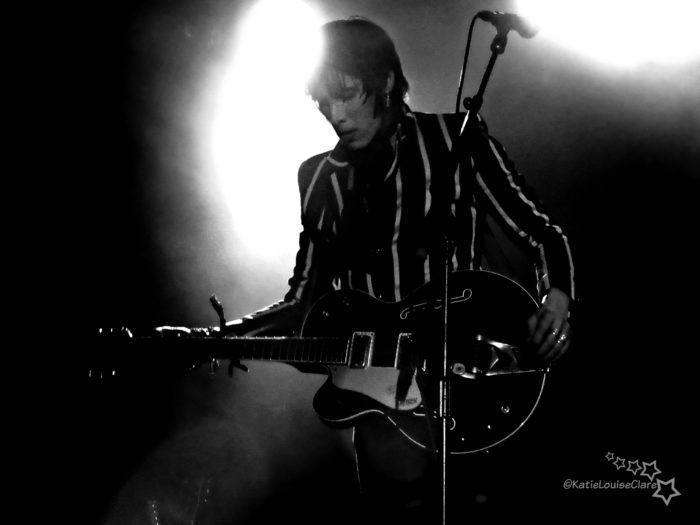 Slam Dunk Festival 2018 North Live Review by Katie Clare additional material by Devika Shah as detailed.  More news, reviews and interviews by Katie on Louder Than War can be found at her Author’s Archive. Katie can also be found on Twitter where she tweets as @tokyo_katie. Also, Katie can also be found on Instagram tokyo_katie_captures this new feed is devoted to captures from shows past and present.

With Appreciation: Photographs provided by Ben Bentley. Additional Photographs by Katie Clare. Please note: Use of these images in any form without prior permission is illegal. If you wish to use /purchase or license any images, please contact Ben Bentley via The Zeitgeist Agency or Katie Clare via Louder Than War.