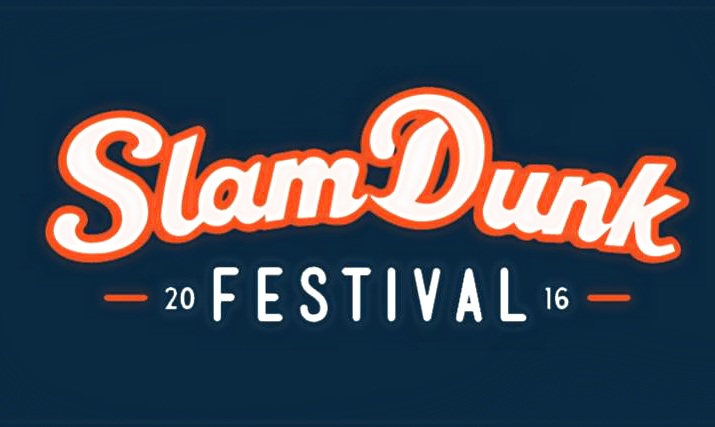 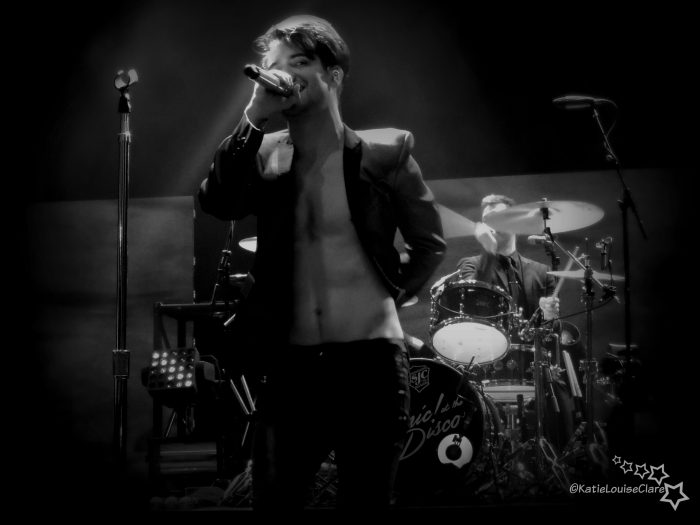 Slam Dunk Festival is celebrating their tenth anniversary and they are quite rightly doing so big and loud. While other festivals have failed, fizzled and fade out, Slam Dunk has gone from strength to strength growing and perfecting with each year. 2016 sees Slam Dunk bring 8 stages and nearly 70 bands and artists, who span the breadth of rock music genres, to the city centre of Leeds. (The Festival repeats on subsequent days in Birmingham and Hertfordshire) Louder Than War sent Katie Clare along to see how the party went down.

There is a hyper sense of anticipation and excited finding of bearings as the gates open some people wander gazing at their little map/timetable and at the options of where to turn first while others, sights already set, run for barriers: Leeds Millennium Square which was devoid of people just a few minutes ago has filled and as the crowd trickles its way through the temporary Slam Dunk village the first band of the day fills the sunshine saturated blue sky with the first note of the day.

Moose Blood (Main Stage) get through some small technical issue’s break into Honey the perfect festival opener; boisterous, appealing and definitely one that’ll sound track later Slam Dunk memories. Moose Blood have carved themselves a fascinating niche; amalgamating the enthusiasm of pop punk, the best bits of an emo aesthetics and passionate British indie rock – their sound has recently genuinely found the centre of the target and they just keep hitting it again and again. Singer Eddy Brewerton reaction to the immensely animated enjoyment and passionate reception, of what was this early on a growing crowd, was one of expressive humbleness. The emotion of moment most apparent when he introduced they closing song Gum another dip into the eternal of love, longing, being lost and found. Moose Blood have set the bar, for the whole festival, really really high.

Heading to the furthest point of the site and indoors to see WSTR (Impericon Stage) once again instantly setting the room ablaze with their breakneck, loud and damn infectious catchy pop punk. Sammy ‘Swifty’ Clifford instantly charms the packed in crowd – instigating not only near room sized circle but getting the entire audience to crouch down mid-way through their Limp Bisket cover – the drop providing a chance for a mass of animated bouncing. WSTR certainly don’t disappoint and deliver immense amounts of entertainment and energetic release; and it is all done with some impressive melodies, exuberant rhythms and enjoyable lyrics.

Back out in the sunshine and just across the road for London based The JB Conspiracy (Desperado’s Stage **) already mid set they are the perfect accompaniment for the weather with a high spirited blend of ska, reggae and punk rock it is impossible to not jig and sway along. The stage has a full spectrum of instrument guitar’s bass, drums, trumpet, keyboards and even alto and tenor sax’s uniting to create a versatile, contemporary and innovative set that showcases a lot of energy, melody and talent.

Already at the end of their blink and they are gone five song set Ohio’s Miss May I (Atlas Stage **) are ripping through their final song Hey Mister. Levi Benton’s massive near guttural vocals somewhat mask the depth of the lyrics: the tracks metronomic drumming and dueling guitars prove to be a concise but worthy dip into some classic melodic metalcore.
Queues are popping up now at nearly every stage around the Slam Dunk village and the early evening bands are tweeting warnings to get to stages early as once capacity is reached it’ll be a one in one out situation: taking the advice I head back to the Leeds Beckett Students Union.

The Kerrang! Fresh Blood Stage – is pretty clearly a small space – this will either be akin to a lottery 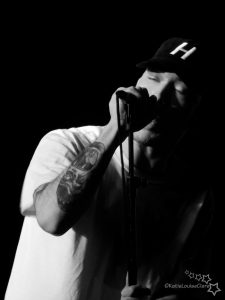 win or a personal disaster for people incapable of getting in. Right now a dozen or so are encamped at the barrier as Sydney’s Hellions (Fresh Blood Stage **) , who despite some technical issues, are playing an interesting fusion of punk and rock melodicism. They are managing to they shake things up with some affable hardcore orientated guitar work and some strong clean vocals from front man Dre Faivre. The set is somewhat frenzied and nervous however the band provided a performance with plenty of positive energy.

New Orleans based Cane Hill (Fresh Blood Stage) singer Elijah Witt starts the show with a bit of a did he really say that opening line “I want to see some violence in this room” as the band storm into some frenzied screeching guitar united with vocals that pitched somewhere between clean and unclean creating a fusion of both of old and nu metal. Not shying away from being upfront the lyrics explore themes of social justice, racism, misogyny even religion: Cane Hill’s first single Sunday School merges an intense metallic vortex and a catchy chorus to deliver something very dynamic. “I want to see people punching each other in the face” imparts Witt – I’m all for buying into a performance but not that kind of bull shit – seriously disappointing because there were some really fine things going on – on that stage.

Lincoln’s Blood Youth (Fresh Blood Stage) are somewhat delayed by technical issue – however no band shall be judged for a dodgy extension cord and the point at which power is again supplied the band take to the stage with a desire to regain command and reanimate the energy in the now filled to capacity room. Kaya Tarsus fearlessly prepared to keep things as up close and personal with audience as possible, spent the majority of a rapid set balanced at the edge of the stage or on the barrier his vocals remaining sharp and controlled. There is rawness to the punk mental anthems that is somewhat chaotic but kept coherent by some masterful bass riffs, from Max Dawson that kick everything up a few notches.

To be honest I’d rather place a video of Creeper’s (Fresh Blood Stage) entire set right here rather than do it the serious injustice of mere words. The lucky few crammed into the tiny section by the uni bar are the grand prize winners today as Creeper without any unnecessary preamble slam into VCR: how the roof stay in place and the window intact is a mystery. The way Creeper marry melodies and harmonies riffs and rhythm’s is fascinating. Listen to the band three EP’s your mind floods with the perceptible from mercilessly vigorous metal and rock, fast ferocious punk to heart crushing touch songs – even buoyant early 60s power-pop finds its way into their charming captivation. The set is flawless, if we ignore its briefness, a mere nice tracks: Black Mass, The Honeymoon Suite, Valentine, Gloom and Misery fly by in all their many vibrant reverberations’. Each band member contributes an important aspect to the music and the performance that delivers spirited animation and theatrical melodrama every moment the band are on stage – and all without a hint of deception. 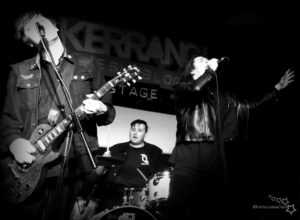 Will Gould throws down the gauntlet to the crowd – who can make it over the barrier best – this sends a throng of bodies rolling and bobbing briefly overhead before dropping over the edge, the winner going on stage, Henley’s Ghost closes the short set and Creeper leave the tiny side room full of thrilled elation – history is often made in modest surroundings.

The queue outside has some unhappy face. “Why did we have to wait so long they’ve finished” complains a girl to the security on the door and as I pass several Teenage Spooky Shit and Callous Heart T’s it becomes clear that Creeper have already truly outgrown the small venues, an already known realisation that makes me feel conflicted.

There is really a brief interlude waiting for Panic! at the Disco (Main Stage) as Leeds Millennium Square starts to darken as dusk begins to draw; it is with full razzmatazz that Brandon Urie fly’s on stage and without preamble, opens with Don’t Threaten Me with a Good Time. The crowd are with him from the start singing along, adding to the jubilation and mood of conviviality. Urie is essentially, being the last original and official member, Panic! At The Disco and Death of a Bachelor ‘the bands’ fifth studio album is if not in name pretty close to a solo effort and it certainly took a few more chances than its two predecessors; it was great to see it so well represented in the set.

Production is an excellent combination of visuals, lighting and pyrotechnics and a genuinely remarkable vocal and musical delivery throughout. Urie remains extraordinarily engaged with such a large audience and does well make this performance to feel intimate throughout. However, by the time it gets to I Write Sins Not Tragedies, things a getting a little fatiguing – nothing really unexpected or staggering takes place and does start feel all a little to smooth, to rehearsed maybe a little too much by the numbers. However, there is a final hurrah as Panic! finish off with Emperor’s New Clothes, has the audience bouncing for all it’s worth, it’s invigorating instrumentation, feisty and slightly unhinged lyrics placed alongside a catchy chorus do wonders and is a giddy bit of fun to end the day on.

There has been much said about the amount of queue/waiting time to get in to stages/venues during the festival and that the security was over zealous. At times slow or restricted access did happen at some stages – the Main Stage, Beckett Students Union and the 02 Academy seemingly suffering the most.

Had I spend more time during the late afternoon and evening moving from stage to stage I would have found this to be more of an issue, opting out of seeing some bands due to long or slow moving queues and heading to an alternative – this is said with sympathy and understanding that this is not always going to be an easy option for fans wanting see specific bands.

An eclectic, enthralling, high spirited, trouble free day of great live rock music with and provided by an awesome bunch of people – I thank you all.

To check out news and photo’s from this year’s Slam Dunk Festival’s including Leeds as well as Birmingham and Hatfield as well as be being prepared for the very first announcements for Slam Dunk 2017 like their official Facebook page, bookmark their website and follow them on Twitter where they tweet as @SlamDunkMusic,