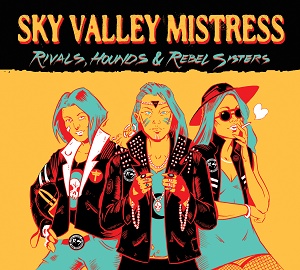 Last years The Best Thing You’ve Never Heard certainly introduced Sky Valley Mistress to the World with a colossal bang, and their new EP does little to tell us that the band re likely to calm down.

Rivals Hounds & Rebel Sisters brings three new tracks, each one as powerful as the last with distinct influences form 70s rock along the lines of Black Sabbath and Led Zeppelin. Kayley’s voice has grown stronger, and has great big metaphorical testicles, as her tones screech and growl as though her life depending on it. Couple that with some fine musicianship from the rest of the band and Sky Valley Mistress should really be playing to a larger audience quite soon.

With a sound that far belies their years the group rip through a trio of songs with commanding and transparent ease. Opener, Smoke Fairy has a superb guitar riff which threatens to break free from the convention of a regular song and despite the hook ‘Pseudo queen’ sounding like every parents saviour Sudocrem, it’s catchy and more than capable of becoming an earworm for the day.

Second track Wishbone provides more than a passing resemblance to Whole Lotta Love on occasion which is no bad thing with vocals that effortlessly move from deep to high, and another memorable riff which underpins the verses superbly.

Final track, She Is So has a killer bassline and picks up the pace with a track which is well capable of being the lead track for any release. Drums roll along and take the track into a mid-track bridge which helps gel the whole thing together.

Another fine EP from Sky Valley Mistress who ooze confidence and aplomb in equal measures.