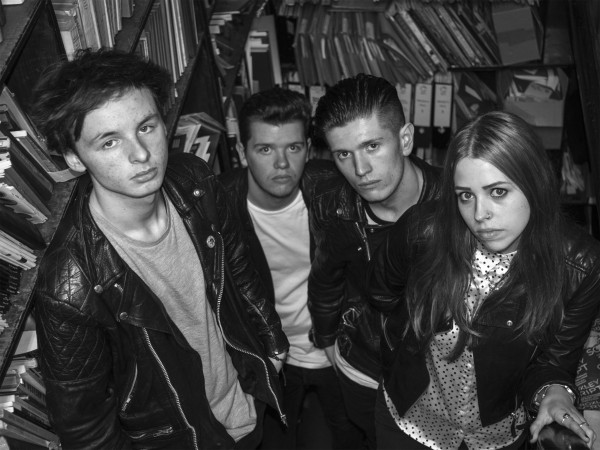 Sky Valley Mistress are a force to be reckoned with, channelling powerful classic influences into their short but very snappy recent Manchester show.

Having consumed column inches in Blues Magazine and plenty of positive reviews for their latest EP release, Rivals, Hounds and Rebel Sisters, Sky Valley Mistress showed just why they have the potential to make their mark. The quartet purveys an array of influences which are rooted firmly in classic heavy rock. The doom of Black Sabbath and the blues influences of Led Zeppelin ring free in many of the band’s compositions. Mix this with a few Hendrix-esque guitar licks and you have a lethal concoction. Although there is a look back in their sound, the more contemporary edge of bands like Queens of the Stone Age and Orange Goblin make them sound amazing musically.

Taking the stage doused in white light and all dressed in black, the band ripped through a short set which showcased material from their  two EPs. The aforementioned sounds and nods were immense, whilst the entire band played their instruments with an aplomb and freedom that showed an enjoyment you love to see.

They rocked hard together as Kayley ‘Hell Kitten’ Davies stalked the stage making eyes at the crowd whilst delivering her bluesy vocals. As far as female front women go, Davies could certainly give Harriet Bevan (Black Moth) or Elin Larsson (Blues Pills) a run for their money in the stage presence stakes.

With the whole band firing during their short set, tracks such as My Time Has Come allowed them to be loose in their playing, with some serious John Squire style wah-wah in the mid section. Set closer, Dirty Blonde Blues, built to a completely raucous finale which firmly cemented Sky Valley Mistress, in my mind, as one band to catch again.

Sky Valley Mistress are relentlessly touring, so keep your eyes on their Facebook page. They  also have a couple of free downloads on their Bandcamp page; a quite unique take on Black Sabbath’s Paranoid, and their debut EP; The Best Thing You’ve Never Heard.

According to the band in the inlay of their debut EP, there ain’t nothin’ more infectious than electrified blues…there ain’t no arguments here. Absolutely superb.