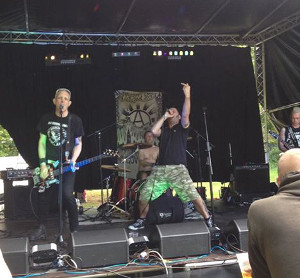 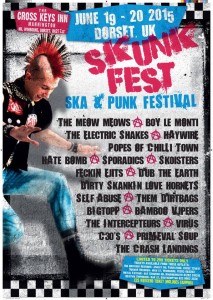 Two stages, two nights, too much cider, that’s the Skunkfest way…..Louder Than War’s Nathan Brown was playing so we suggested he report back on this intimate ska and punk affair.

On the 20th June where were you? Rocking out at Hellfest? In Norwich with the Convoy Cabaret? Hanging out at Stonehenge waiting for the solstice morning? I was in east Dorset at Skunkfest. A small set up with two stages, the name comes from the musical fare: Ska and Punk (geddit?) or as I wryly observed from the stage, Skins and Punks….or a crowd that smells like Skunks?

I never made it down for the Friday night but heard good reports from those who were there. Tales of an amazing seven piece ska band unfortunately playing to too small a crowd were balance out by comments about how everyone there was so friendly.

Arriving on Saturday shortly before the first band opened proceedings we found the site behind the Cross Keys Inn. A lonesome country pub on the middle of heathland that could easily be frequented by old gits who stare at strangers and say “Don’t go on to the moors”. Equally it could provide a welcome watering hole for avid hikers. Over the last four centuries it was doubtless a welcome sight for a weary traveller. Not this weekend though. Their ample choice of good ciders had a bunch of punk rockers sitting outside topping up from the night before.  A festival that gives you access to a real pub?  Why doesn’t this happen more?  And as well as giving us good quality cider, we were saved from the brutish behaviour of out of order security.  These are the joys of the small festival.  And a portaloo is a portaloo no matter the size of event.

Following the Crash Landings energetic set of garage punk, undaunted by being the first band on, the Skoisters set out their stall of street punk (Oi!?) and ska with a bit of a metal tinge to the guitar sound here and there. The crowd swelled just as the rain kicked in and these Bournemouth herberts finished off with a cover of “Borstal Breakout” which seemed to go down especially well. Sheltering from the rain in the awning of one stage to watch Them Dirtbags on the other (open) stage, we were treated to a band with definite leanings towards the dirty rock’n’roll end of things, although no quiffs to be spotted. Alongside some psychedelia, a clear Cramps influence was present, which is always good in my book. In fact I really wanted their semi-acoustic guitar to have a whole load of reverb/delay layered onto it just to seal the deal!

Boy Le Monti took us back in the ska direction with covers of 60s classics such as Alton Ellis’ Dancecrasher and the ubiquitous (but always a pleasure to hear) Liquidator. Well played and probably used to a larger crowd, which they deserve, they had a fine collection of hats to top off a great sound. The hangovers clearing, the festival vibe was starting to pick up some swing. Keeping with the ska theme, but with a bit of dub and punk thrown into the mix were The Sporadics. Bass player Dave had assisted in attracting some of the ska acts to the bill but as their guitarist had a wedding to play they had to give up their prime slot later in the evening.  No matter.  The first glimmer of drunken dancing appeared as the afternoon progressed towards early evening. Brighton’s Primeval Soup launched into their set of ska-punk for crusty activists as I was having to set up on the other stage (and craftily nip to the pub to top up my cider supply). I could hear them clearly enough: Think Citizen Fish or Culture Shock crossed with Propagandhi and you’re in the right area.

So, here comes the reviewer’s dilemma. Can I be trusted to give a fair review of my own band, Haywire? (pic, right) Probably not, so I will quote one of the other festival goers – Tony Popkids, drummer of the Bus Station Loonies: “Haywire played a storming set flying the punk flag.” Can’t say fairer than that. The Primeval Soup fellas marvelled at how “gnarly” my bass sounded so I think we achieved our aim of being the noisiest punk band at the festival. A crowd of heckling drunkards gathered while we played and a few punters told us they only came because we were playing.  Makes you feel all gooey inside.  Oh no, that’ll be too much cider and not enough food so a quick trip to the falafel stall was in order.

Due to Primeval Soup finishing early and Haywire consequently started early (when does that ever happen at a gig or festival?) there was a hiatus as Dub The Earth prepared for us. I (vaguely) remember seeing them 20 years ago and I am pretty sure they have changed somewhat in the intervening time. Less dub, more ska and there’s an injection of anger, with their vocalist reminding me of Eve Libertine from Crass at her best! A contrast with the music that worked well.  I could use a wanky work like juxtaposed but why would I…oh, shit, I have used it! There ya go.

Andy Nazer from Self Abuse, who were on next, was largely responsible for this festival, along with a mysterious fella called Hawkeye who never actually made it to the event. Self Abuse played their own brand of melodic punk rock for near on an hour with material spanning from 1983 to 2014 and drew plenty of punters into the performance field – deservedly so. Unfortunately they also attracted midges, which none of us deserved – the perils of summer time in the countryside! I have to confess to missing the start of their set as my cider had needed yet another top up but it was all for the cause, kids.

Darkness having fully descended, Virus took to the stage, lit up with an eery green filter – adding to the ambience of their sound. Another band with one foot in the past and another in the present day, they knocked out songs from their recent 7 inches and from earlier LPs. Dirgey anarcho-punk..most definitely not in the ska camp!

So, we were left with just one act – The Meow Meows from Brighton. Going a little way to addressing the gender imbalance among performers, this largely female ska/soul/rocksteady outfit boasted a fine brass section, topical political lyrics and two singers, unless that was me seeing double as the cider worked its magic….It sucks that a band having women members deserves a mention, or even that it is in some way relevant – we don’t say “Such and such a band had a male singer” do we? But let’s be honest, there ain’t enough women on the stage, so it is relevant.

I have to say a big cheers to Sean and Michelle for saving us a taxi fare and giving us a cheaper lift back to Southampton.  And to all concerned in creating a great environment with great bands.  You rock! 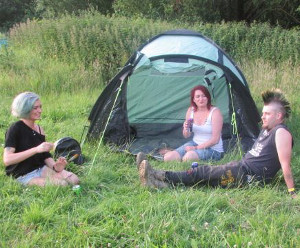 What is clear about this festival is that the intimate nature and low price pleased everyone there (£25 for 19 bands and camping is cheaper than some campsites for one night!). It’s a shame more folk didn’t turn up, but with no ability to buy tickets on the internet and lots of competing draws it was inevitable. I hope that they decide to run a repeat as the kids want more (see below)!  So, if it does happen next year, make sure you go.

As I wasn’t present for the whole shebang I thought it only fair to ask punters who were via the Skunkfest Facebook group for their views. Here’s a selection :

Words by Nathan Brown. Pics stolen from Annie Johnson and Michelle Barry thanks to the medium of Facebook.  More of Nathan’s writing can be found in his writer’s archive.