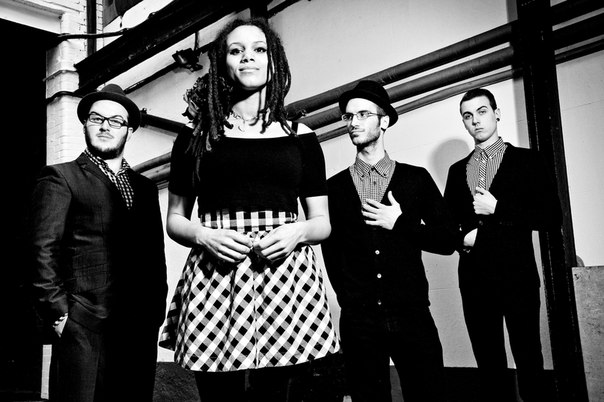 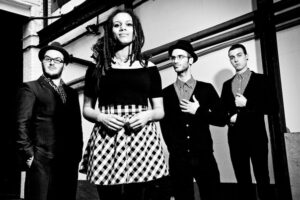 Out promoting new album FM on a sell-out tour, The Skints and friends hit Edina for the first time in a while. Joe Whyte tunes in to Radio Murderation FM.

The Skints are on a roll right now. New album FM is grabbing critical plaudits, airplay and nods of approval from far and wide. Deciding on a last-minute whim to travel through to the actual capital from Glasgow (which anyone with any sense knows is the real capital), we were rewarded with another blistering gig from this young reggae/ska/punk crew. The show was part of the Wee Dub Festival which has been winning hearts and dubbed-up minds for several years. Stick this in your diary for next year as it’s well worth checking out. Tonight’s show is an over-14’s event and the organisers get a huge thumbs-up for including the future fans of the genre. There are a few young ‘uns in tonight and the friendly if exuberant crowd are looking after the youth down stage front. The venue is selling booze in bottles and cans. This would never happen elsewhere in Scotland and it’s testament to the good-natured vibe of the audience that there is never a hint of bother or flying missiles.

Studio 24 is in the heart of the city and is bouncing tonight; there must be a capacity crowd in the venue and a hot day is getting decidedly sweatier in the dark confines of this excellent venue. The sound system is crystal-clear and the bottom end is rumbling through the floor as the DJ warms the crowd up with some reggae classics.

First up is Hollie Cook, erstwhile daughter of Pistol Paul and herself a former member of the reformed Slits line-up from a few years ago. There are clearly a few folk here to see Hollie and her set is warmly received. Any lingering Slits-style angsty agit-dub is long-gone; the set is smooth, luxurious Lovers Rock for the most part. Hollie is all confidence and charisma and seems entirely at home fronting her band General Roots. She seems surprised at the warm reaction she gets from the crowd. She’d better get used to it.

We’re kept waiting for a while as some monitor difficulties get sorted  out; The Skints are side stage and are clearly anxious to get on. Josh is literally bouncing on the spot waiting on the call. The lights drop and we’re off. Opening with latest single This Town the band quickly hit their stride, monitors or not. I last saw the band at Rebellion Festival in 2013 and the touring and exposure has clearly honed what was a great band into a very professional outfit. They are all terrific musicians and they make this seem effortless at times. Jonathan Doyle on bass is shaking the foundations as he grins at the girls stage front who are all doing that American Indian whooping thing. One of them is holding up her arm with a rather indiscreet message written on it in marker pen; Jonathan is having none of it though and maintains his cool with a smile. Marcia is a shy-looking presence in the eye of the storm. Josh is all bug-eyed energy and guitar hero shape-throwing and drummer Jamie holds it all down with authority. Sharing vocals (apart from Jonathan who simply provides the thunder) between the band gives real colour to the set; Marcia’s vocal is sweet and cool, Josh wired and street tough while Jamie is measured and multi-hued. The temperature goes up a couple of notches when the band are joined by Brit-reggae legend Tippa Irie and fellow traveller Horseman (who has been a Skints cohort for some years). Bringing an already heated crowd to near ferment, Irie and Horseman add a bit of  their old-school authority to the songs from FM.

A reggae-fied cover of Black Flag’s My War is neatly inserted into the set; you’d barely recognise it bar the lyrics but The Skints take the words and make it something completely unique. Josh takes to the mic to remind us that the band started out as a punkier outfit. He needn’t have bothered; everyone here knows and loves this group and every lyric is sang right back at them with fervour. There’s a real controlled aggression to much of the set. The Skints can take a crowd and hold it with ease these days with little recourse to the punkier numbers of old. Ratatatat and Live East, Die Young get the crowd grooving and things are eased back a tad with The Forest For The Trees which sees Marcia bring some neat flute flourishes. It’s not often mentioned, but there’s a soulful edge to The Skints; Lay You Down is as sweet a song as you’ll hear. “East London in the building” declares Josh as Rival joins the band for a Grime-infused Eyes In The Back Of My Head.

The Skints are very much a band on the cusp; they are at the top of their game right now and the question is, do they need a “hit” to take them to the next level. Venue sizes have grown with their audience since I first saw them in Carlisle a few years back and they are festival stalwarts nowadays. The smiling faces leaving the venue and singing along with Culture Vulture would suggest that many are happy with their current status. This is a band that deserves to be huge.

Tippa Irie can be found online here: tippairie.com. He’s also on Facebook and tweets as @tippairie7665.