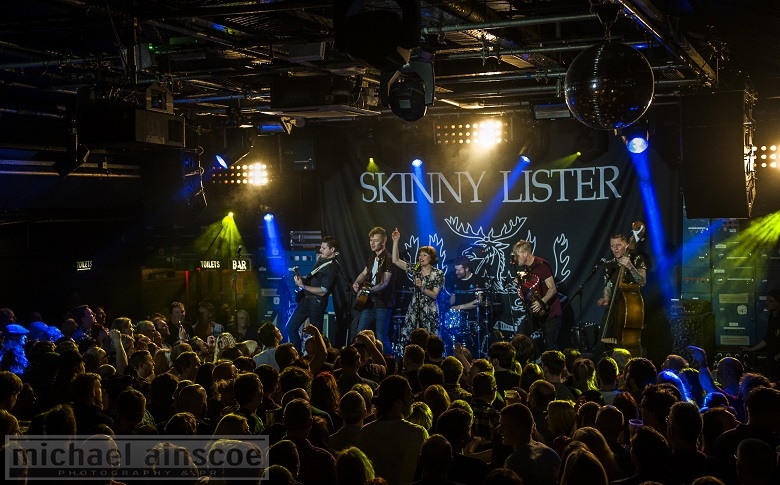 Tours across North America, Europe and beyond  is all part and parcel of being the hardest working band on the road. Their ‘On Tour Always’ slogan is no idle boast as Skinny Lister returned to Manchester with their raucous shanty punk to tick off another of the city’s venues.

It’s a list that seems to be ever growing – having encountered the Skinnies in the tiny upstairs room at The King’s Head, The Academy with The Levellers and recent trips to the Ruby Lounge and Deaf Institute, they are working their way round all parts of the city whether it’s headlining or supporting. Slowly but more important steadily, and even more important, the following is building.  There was even the “Who saw us opening for Boy George across the road?” (at The Ritz – one some may have forgotten about/missed). Their current UK jaunt has eight of the ten  dates sold out –bigger venues might be  needed to host the Skinny Lister whirlwind.

They may have enlivened many a festival and blown away the cobwebs on many an ancient folky, but they’re at their finest in the intimately  packed and sweaty club venues where they can see the whites of your eyes and don’t have to decant their flagon of rum into a plastic container for health and safety reasons. 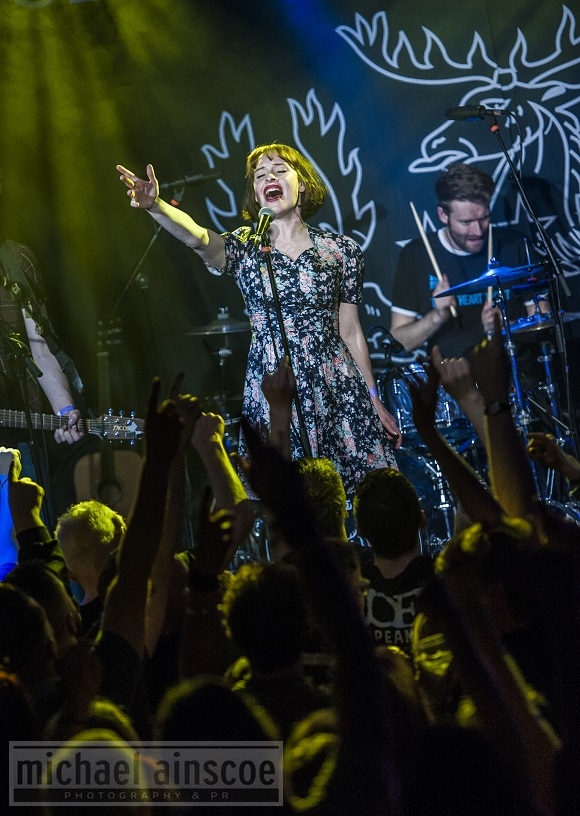 With their logo-ed  drape covering the usual Gorilla backdrop of electronic machine casings, it took less than half an hour before  Lorna Thomas was in the crowd, on someone’s shoulders leading the interaction. She may appear  an incongruence in her  Laura Ashley style dresses  but with  Devil In Me,  she’s had the tribute of the Lorna’s Hammer cocktail, inspired by the bucket list ticking video – check it out. There’s also much more to The Skinnies than barroom bluster and boisterousness. Sam Brace’s electric guitar constantly cascades with   tumbles of notes which complement the usual rambunctiousness of the guitar / mandolin / melodeon combo.

At twenty plus songs based round the bulk of the last album The Devil The Heart & The Fight,  there’s also the bonus of them road testing a new song with typically Skinny  lines –  “Listen to yourself you’re talking crap, Why d’you wanna go and do a thing like that” – more of the same? Don’t mind if I do. While they may  present a riotous front, they still have  things like  Bonny and the sadly missing Carry to shift  them towards what would be the anthemic cigarette lighter/mobile phone  moments  in a rock gig.

Topped off with a popular choice in support from AJJ complete with sing-alongs and calls back for an encore, at the end of the day there’s no such thing as  a bad night out with Skinny Lister.