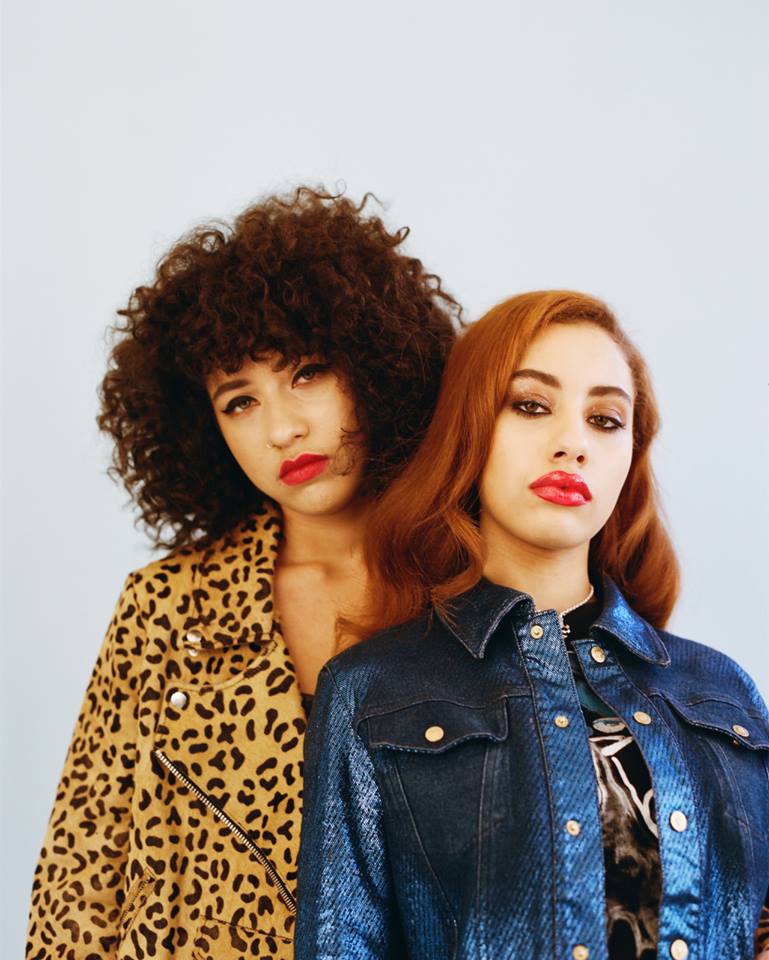 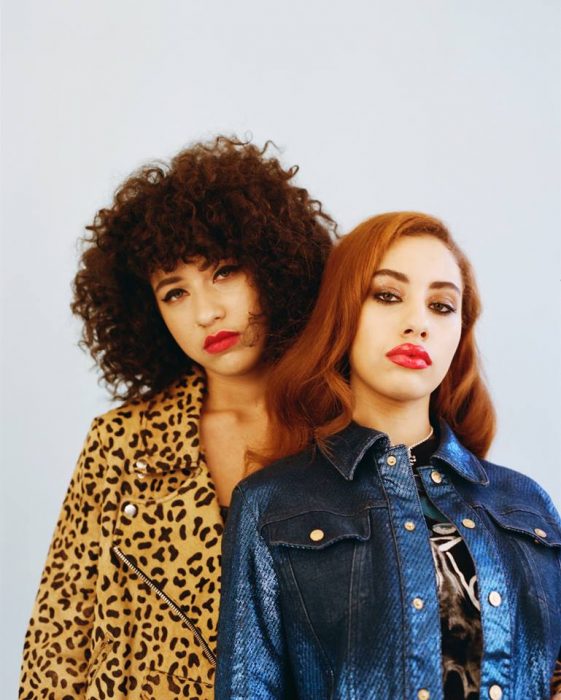 Last weekend I met up with Ursula and Delilah Holliday, the sisters better known as Skinny Girl Diet, as they prepared to take to the stage for their headline set at Decolonise Fest, at Bermonsey’s supercool DIY Space for London.

I’ve loved the band from afar for a while, a love compounded in March when I watched them rock the fuck out of the Shepherd’s Bush Empire supporting Senseless Things. Having, since then, lost their bassist cousin Amelia Cutler from their line-up, the band as a close-knit duo are delivering a more biting sound, the lyrics are more poignantly-heard, and with Delilah working harder than ever on guitar her licks are engulfing, effortless, bluesy, and very punk rock.

I wondered if I’d be nervous meeting these awesome Wunderkinder in the flesh, but found them warm, unassuming and totally charming – sitting cross-legged on the floor eating pre-performance vegan food, the sisters bundle up laughing together and, adorably, finish each other’s sentences. Their parents, Melodie and Dan Holliday, are never far away from them, and emit the same warm, positive vibes that are just on the right side of the dividing line between punk and hippie. I think I want to be adopted by the Hollidays.

The band has crammed a staggering amount into the years they’ve been going. Their first gig (with Ursula aged 12, Delilah aged 15) was opening for Viv Albertine. Since then Skinny Girl Diet have established themselves Queens of the DIY scene. Their distortion-heavy grungey punk rock, with lyrics of feminist social commentary, draws easy parallels with the ’90s’ Hole and Bikini Kill, but the band have always been keen to point out that their music shares only some of the aspects of the Riot Grrrl movement; Skinny Girl Diet’s work is all about inclusion, and using the platforms that are open to them to amplify the other, marginalised voices around them. Their debut album Heavy Flow came out September 2016, and I’ve a feeling it will be the first of very many … these focussed young women have all the skills.

Get to see these two live as soon as you can. For example … at their headline LOUD WOMEN show at the Lexington on 20 July.

LTW: Tell us about Decolonise Fest

Ursula: Decolonise Festival is all about highlighting the fact that punk is mainly white male dominated, and it’s a space for people of all backgrounds and lifestyles to just come together and feel proud of the fact that punk can be, just whatever you want to make it.

Delilah: It’s such a good thing that it exists! We’ve played Afropunk …

Ursula: But I think this is better.

Delilah: Um … It’s different. I feel like it’s more ‘to punks’. But Afropunk’s a bit different. We were playing Alexander Palace – the main stage – so I felt more disconnected from the atmosphere. But the atmosphere here is really …

Delilah: Yeah, and you can just suck in more!

Ursula: Yeah. Suck it up!

What does the DIY scene mean to you?

Ursula: It’s the place that feels like home. We were taken in by so many people – taken under their wing. We used to play Power Lunches, when it still existed. I think it’s closed now maybe?

Delilah: … getting published ourselves, and distributed …

Ursula: yeah, all of that stuff! But it does make it more worthwhile because you’ve got complete control – that’s one thing. But it’s also a pain in the arse financially. Because we basically go to gigs, play, and put that money into what we do. Everything we earn is just circulating, so we don’t really make money. But, hey, it’s fun!

Delilah: The more we do it the more we realise that we don’t really want to be commercial, and our goals and aspirations lie more in helping people, rather than, like, being famous.

Do you see music as your future?

Ursula: Yeah, it’s the only thing that really speaks to us, and that we’re good at.

Delilah: It’s the most fulfilling thing. We just want to help people, and make them feel like they’re understood. And that’s the goal really.

Delilah: Have a really thick skin, and don’t give up if you get a bad review, or if the crowd don’t understand you. The more you do it, the more people will understand it, eventually, and the more other young women what you want to inspire, will respond back to you. So it’s all worthwhile when that happens.

Have you faced any negativity?

Delilah: We a really horrible review from a female writer at The Guardian who said that we were just fashion babes …

Ursula: Yeah, she started putting what we were wearing under scrutiny.

Delilah: It’s just really upsetting because, obviously not all women have to be friends, but it is nice when other women support young people making music.

Your Dad is your Manager!

Ursula: Our Dad does pretty much all of our posters and manages us. A really good manager – Dan Holliday – who we owe our lives to, and everything else! *laughs*

Delilah: He started managing us because I had my GCSES at the time, and I was like ‘Dad, I can’t do these emails!’, and then ever since then it’s like … no offence to Dad … he’s learning as well, and we all learn together, and he keeps everything glued together. It’s really nice.

And your Mum is a DIY punk too …

Ursula: She’s the biggest supporter of our band. She always comes to the front row and dances and sings along, so that’s really nice.

Ursula: We don’t really have the whole thing of ‘rebelling against our parents’ because they’re just completely supportive.

Delilah: Sometimes I get a bit insecure and I wish I could rebel in some sort of way …

Ursula: Yeah, find something, anything!

When’s the second album coming out?

Delilah: The whole second album’s finished it’s just, cos we do everything ourselves, it’s really hard to get everything mixed, and make videos … so it takes a while and it’s frustrating, but we just try and move at our own pace and hope people understand!

Ursula: Loud women are the best kind of women!

All words by Cassie Fox. More writing on Louder Than War can be found at her author’s archive.