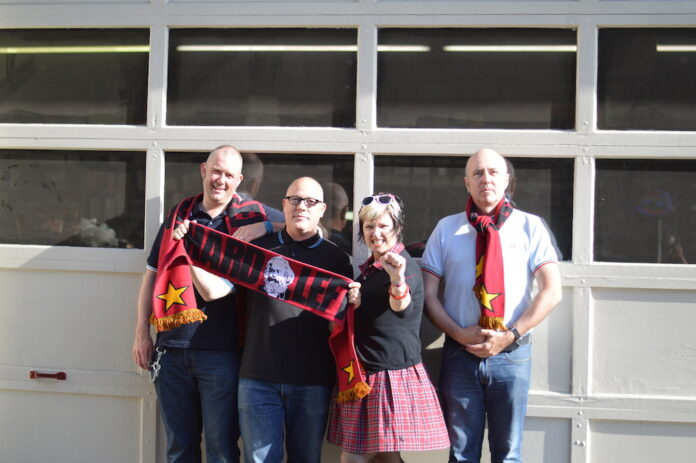 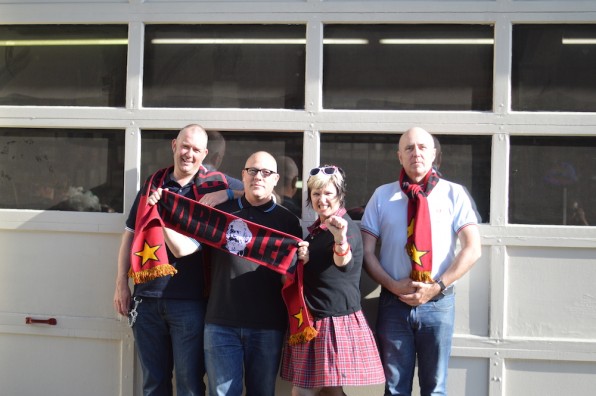 What better way is there to get into the spirit of Xmas than with some snotty nosed punk imbued with the spirit of ’77? Esp when that “snotty nosed punk imbued with the spirit of ’77” is then blended with the sort of damn fine catchy tunage that we thought only Noddy Holder were capable of? I mention the above for a perfectly good reason – it’s exactly what we found when we were sent the new 7″ from nascent punk band Hard Left. We have an exclusive stream of the tracks that comprise the single for you today too and you can find em out below but beware – we can’t guarantee you won’t be whistling these tunes till, ooh, at least Boxing Day I reckon.

Here’s the spiel about the band and their Xmas single, a rabble-rousing, tub-thumping, gloriously entertaining slice of pop infused punky brilliance:

“Skinheads Home For Christmas” is a Christmas single in the classic pop tradition, from hard-mod / punk band Hard Left. Brought together by the music, held together by the outrage — Hard Left are a band borne out of a desire to explore leftist political ideas and marry them to rabble-rousing music worthy of the worldwide struggle against capital. Far from a dry exercise in doctrinaire thought, Hard Left’s songs are great punk first and foremost, and ripping good fun.

“The band members have been involved with punk and DIY music for nearly a century combined, including time in bands like Boyracer, Juke, Whorl, Ciao Bella, Lunchbox, Black Tambourine, Kids On A Crime Spree and operating the respected labels 555 and Slumberland Records. Initial Hard Left recording sessions in Spring 2014 led to the release of two limited edition lathe cut singles, the Situationist-inspired “What’s That Sound?” and the tough-as-nails “Safety.”

“Now they follow-up with the first fruits from their August 2014 album sessions. Carefully packaged to recall the classic look of 70s UK pop singles, “Skinheads Home For Christmas” is a thumping tune with it’s tongue in cheek, but only just. Slotting into a long tradition of holiday-themed pop singles, Hard Left bring that feeling of hopefulness to to the grittier end of the musical spectrum. And of course it’s a top tune, worthy of it’s street-punk lineage.

“On the flip side the band tear into the Bay City Roller’s classic “Yesterday’s Hero” with characteristic flair, amping up the tale of faded glory into an anthem of resistance. Crammed with guitars that soar and rage, terrace chants and raw-throated vocals, the song builds to a huge climax. A worthy (and rather unlikely!) addition to the punk canon.

“Scattered across the east and west coasts of the US and the Arizona desert, Hard Left came together to bring you great punk, with a message of passion, resistance and hope. Call it “utopian Oi” if you will, or “hard mod,” but keep your ears open for more music soon from this compelling band.”

The single drops for real on the 8th Dec but till than you can check out the single and flipside, Skinheads Home For Christmas by Hard Left exclusively on Louder Than War.

Hard Left can be found on Facebook and at their Bandcamp.