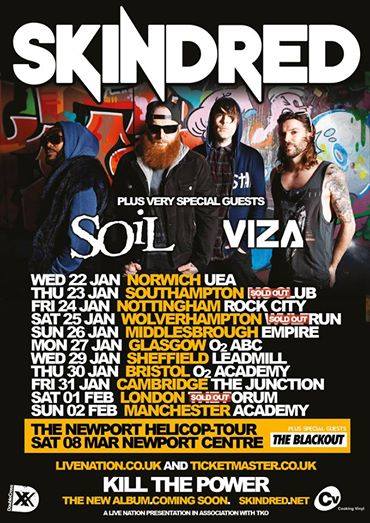 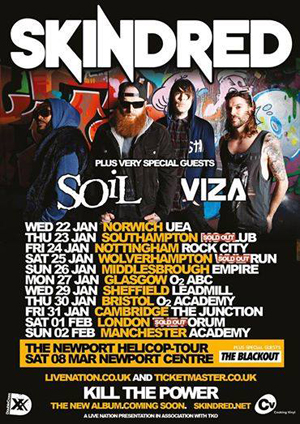 This week there’s been a storm sweeping the U.K, some call global warming, others call it freak weather; everybody else calls it Skindred. Sophie Sparham reports on the awesome power of a force of nature.

Welsh rockers, Skindred, have kicked off 2014 big style; not only have they released their fifth studio album Kill The Power but also begun the UK leg of their world tour. Tonight, they’re in Wolverhampton playing to yet another sold out crowd.

Viza are first to take to the stage, providing the audience with their happy, tropical rendition of good ol’ rock and roll. Combining a complex arrangement of instruments with upbeat songs, the LA rockers create a party atmosphere and win the crowd over.

‘This is the home of metal, right?’ Question asks lead singer K’noup Tomopoulos before breaking into a brilliant Doors cover. However, no one is leaving for the whiskey bar anytime soon.

The guys finish with a heavy song from their new album Aria, leaving Wolverhampton eagerly awaiting their next return.

Chicago metallers, Soil, are next to take to the stage, entertaining the crowd with their traditional sounding tracks. Everyone sings along to the rock bar classic Halo  and their cover of the legendary song Black Betty before the band leave the stage.

Flashing strobe lights dazzle the crowd as they beat their fists to Thunderstruck and the imperial march in preparation for the main event.  Sporting his trademark military hat and shades Webbe, alongside Mikeydemus, Pugsley, Goggin and Sturgess step onto the stage and everything explodes.

The whole room moves as the band open with the classic tune Rat Race. Girls get on shoulders drinks are thrown and everyone jumps, screams or dances; all eyes fixed to the front. A few songs in, amongst the smoke and light, it soon becomes clear that this isn’t a gig, it’s a Skindred party and everyone is invited.

The band play a mixture of new hits such as title track, Kill the Power, Worlds on Fire and the brilliant Ninja with old classics like Pressure , State of Emergency and even some tracks from their first album Babylon. Everything they do tonight  is done with perfect precision and peeking energy levels. It’s like watching their Greatest Hits’ album  unfold in a messy setting.

This tour also brings more dance and electronic music into the mix, which works in perfectly with the music. The band create brilliant mash up on stage, mixing songs such as Don’t Stop Me Now with the likes of Jump Around and even Jay  Z’s Niggas in Paris.

There’s no denying that Benji Webbe is exactly what a front man should be. Not only are his vocals brilliant, he’s loud, exciting and humorous. His audience are wrapped around his little finger as he gets them to sing lyrics back to the stage and at one point, even makes them chant the riff to Pantera’s Walk.

After a no holds barred performance, the band finish on Warning with guest vocals from Ryan McComb. Their crowd wave around hat, scarfs and even bras in traditional Skindred style.

As they leave the stage Nobody Does it Better plays out to the emptying room. No other song could be this fitting.

It’s not very often you can walk into a gig and find yourself completely confused to whether you’re there watching a band, at a club or at some crazy party, but Skindred somehow manage it every time. Now with Germany and Australia on the horizon, nothing can stop them.

So whether you’re young or old or like dance or metal …. whoever you are, my advice is to go and see Skindred this year. This band are like nothing you’ll ever experience before!

All words by Sophie Sparham. Check out Sophie’s Louder Than War archive here