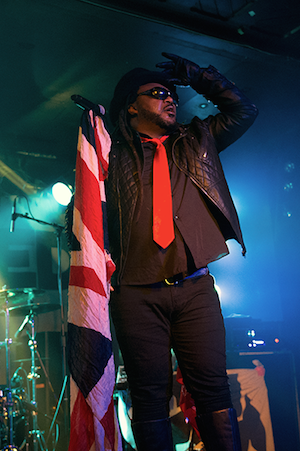 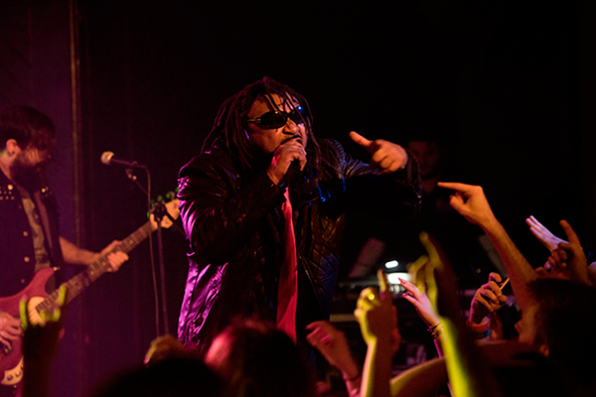 Skindred – Photo © Tess Donohoe as are all others on this page.

Even by their own standards Skindred’s 2014 has been hugely successful and last month they brought it to a close with a series of European dates which included some in less oft-frequented (by bands anyway!) UK towns, such as Bath, Carlisle and oh yes, Poole, from where Louder Than War’s Nick Holmes has filed the following report.

It’s been another incredibly busy twelve months for Skindred. After releasing highly acclaimed “Kill The Power” at the start of the year the band has toured the album across the globe, stopping off for a triumphant main stage appearance at Download Festival and playing to a mind-boggling 400,000+ audience at the Woodstock event in Poland. From those lofty heights Wales’ finest rounded off the calendar with shows at intimate venues up and down the UK. Grassroots, rock, riot! 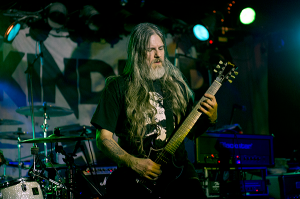 Speaking of grassroots, Dorset sons In The Hills (right) kicked off an eclectic bill that was a mini-festival of sorts. Coming on stage minutes after the doors open is never easy but bald-headed, burly frontman Choff took it in his stride and his banter is as entertaining as the band’s music is heavy. That heaviness is reminiscent of Crowbar, with some Godlflesh-style jarring grind in the mix and fast hardcore bursts. “It’s like someone farted in school assembly and cleared the place!” laughed Choff before declaring he felt like “a fat Dorset battery hen” on the small stage, penned in by a rather excessive stage barrier. He climbed down onto the venue floor and spent the rest of the set stalking around the audience, stopping occasionally to bark in bemused and amused faces. As their impressively sludgy songs wound down Choff bid goodbye in his own style, “They say Wimborne people are inbred and have webbed feet. We’re the proof!”

Next up were Londoners Feral Sun, who wear their US influences very much on their sleeves. Mostly clean vocals from Mick Burns and chugging riffs from his band brought to mind Stone Sour and Killswitch Engage. Even the frontman’s patter was a bit of American stylee. Though nothing stands out as original, the songs are well-constructed and if they work on forming a stronger identity of their own they could do very well. 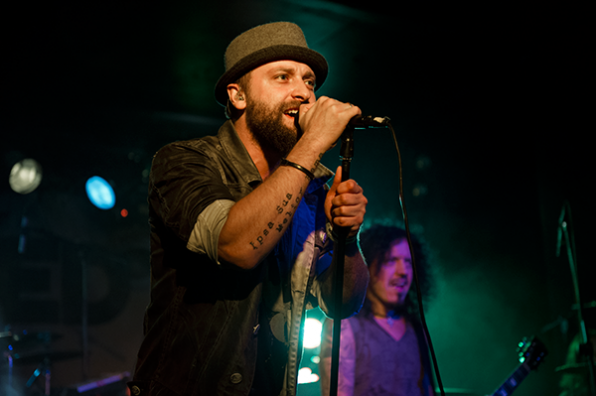 Then something unexpected and possibly unintentionally hilarious An air raid siren on the PA was followed by moody bass and militaristic drums. A sound like New Wave of British Heavy Metal but with really pop-style lyrics. “It’s you and me and the night is young! I’m here again like where I belong!” or something like that. This was a Polish five-some named Chemia  (see photo above). Gene Simmons once said a band should look like a family. This lot look like members of several different families who adopted each other at random. Singer Lucasz sports short hair, beard and pork pie hat, kind of Hoxton hipster via Krakow. There’s a long-haired tattooed guitarist who looks like he escaped from Diamond Head in 1982. A beer-bellied bass player in a black Mickey Mouse shirt and aviators, backward cap completing the look. “Let me see your hands!” schtick like they are playing a US arena tops it all off. In a venue that normally hosts cover bands they fitted right in but at least they wrote their own songs. The pace picked up and the crowd, getting increasingly drunk and excitable for Skindred, partied like it was 1979 with some high-fiving the singer as he called “Yessss Sirrrrr!” Farcical fun.

The retro vibe continued as the pre-show jukebox threw up “Welcome To The Jungle”, Metallica and other old skool classics. The walls of the venue were beginning to sweat already and the 300 punter capacity was at its limit. Time for a Slipknot sing-a-long before AC/DC’s “Thunderstruck” and a dubstep mix of Star Wars’ “Imperial March” heralded the return of the dark lord of ragga rock. If fronting a band was a sport Benji Webbe would be a multiple gold medal-winning conqueror. Olympics, World Championships, all of it. There are very few who can match the energy and enthusiasm he displays whether performing for 300 or 300,000. He also has the magical skill of making everyone feel included. Just wow.

The place was rocking from the moment “Rat Race” and “Stand For Something” blasted the room like an earthquake. Led by the expert rabble rouser-in-chief the crowd bounced its way through favourites including “Doom Riff”, “Warning” and “Cut Dem” plus the latest album’s title track. There was an unplanned pause when a persistent and very drunk specimen pushed his way onto the stage in spite of the barrier. The power was cut and the offender removed but thankfully positive vibes remained intact. Benji, having changed outfit, returned to rip through “Nobody” and “Warning”, complete with the crowd sitting down then jumping up ritual and Newport helicopter, ie. whirling your T-shirt/pants/bandana round your head!

After a brief break over the holiday season Skindred will be back on the road, touring with saucy spoof rockers Steel Panther, and there is already talk of a new album. Truly no rest for one of the wickedest bands around.

Look out for our interview with Skindred’s Dan, coming soon!

Feral Sun can be found online here: feralsun.com. They’re also on Facebook and they tweet as @feralsun.

All words by Nick Holmes and all the photos © Tess Donohoe. More writing by Nick on Louder Than War can be found at his author’s archive and more photo’s by Tess can be found either here or at her website: tessdonohoe.com. Finally, Nick tweets as @oldenick666 and Tess as @tess_donohoe.