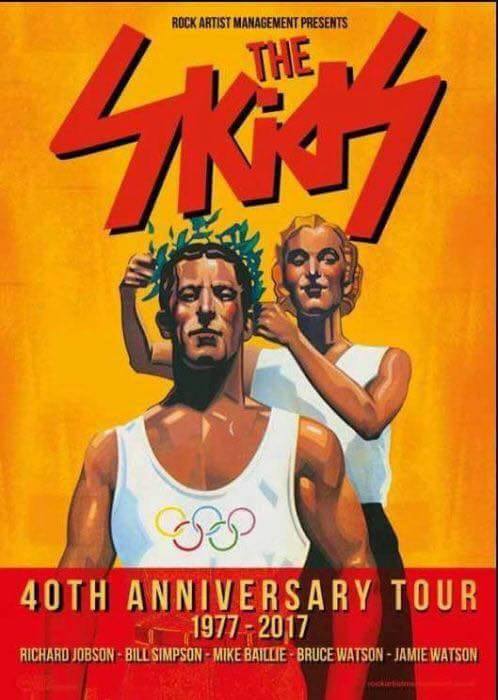 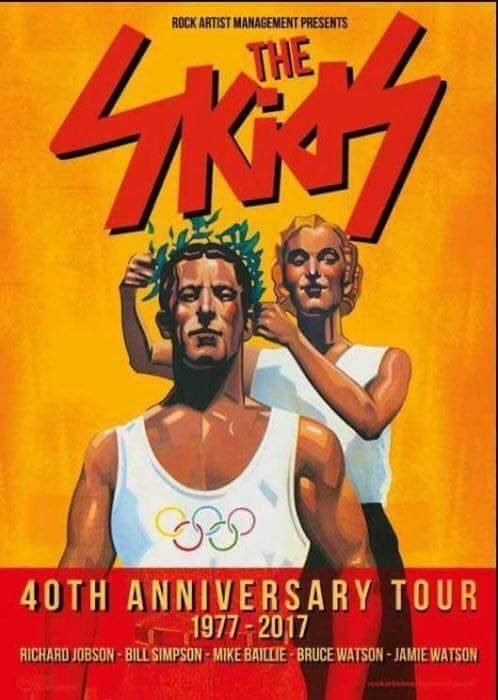 Well that was pretty fucking special.

The triumphant return of the Skids worked on so many different levels that it’s hard to believe they ever went away. The band, who emerged in the punk wars, are further proof of the strength in depth of that musical wave – a time when perhaps 40 odd bands all had a whiff of greatness about them. Some of them crashed and burned, some of them soldiered on to their never ending victory lap and some like the Skids seemed destined to never return.

The 2001 death of guitarist Stuart Adamson whose last gig we saw in Manchester before he flew out on his fateful trip to the USA and his tragic suicide seemed to have kyboshed any idea of a permanent return. Adamson was the talented song writer whose innovative style gave the band an idiosyncratic and original edge and joined all the dots from punk rush to the proto punk guitar brilliance of his hero Bill Nelson and also an ear for groundbreaking future post punk guitar like his Scottish contemporary John McGeogh. His place is ably taken by Bruce Watson who he shared the stage with in his post Skids band, Big Country and his guitar playing tonight is a perfectly measured tribute to his former band mate and interplays with young guitarist and ‘Ed Sheeran lookalike’ his son Jamie.

original bassist Bill Simpson who played on the first two albums locked tight with drummer Mike Bailee who was a full band member for their thirdalbum The Absolute Game and the is rock solid rhythm section makes the band super tight serving the songs up with a real care, with all the shape shifting rhymes and rhythms and clever constructions in place and perfect for charismatic frontman Richard Jobson to project his still powerful voice over.

The last of the classic punk generation bands to reform the Skids hit the stage to a rapturous reception. They have, of course, got back together a couple of times before – a 30th anniversary thing in their home town of Dunfermline but this time it’s serious – a whole tour and some festival action.

Jobson is on fire fire tonight – a great frontman with charisma to spare his autodidact intelligence and powerful stage presence is still in place even if he amusingly complains of being knackered from jumping around in the songs like his youthful self complete with his trademark one legged scissor kick dance which he takes the piss out of for his lack of cool. Jobson is an engaging and powerful presence and he commands the stage with his voice delivering a series of songs that like so many of these classic bands sets is full of long lost album gems that fly back at you from over the decades.

The hits are, of course, here Working For The Yankee Dollar is still a timely reminder of the world order and catchy as fuck with that guitar lick ear worm, Masquerade and Charade are both anthemic, The Saints Are Coming is huge with that football stadium chorus and Into The Valley is a thrilling rush – one of the great songs of the period, they even play early favourite Charles and even throwaway b side Albert Tatlock and a new song which augers well for the new album. It’s hard to believe that the last time I saw them play was in 1978 supporting the Stranglers at Lancaster University when the band was drowned by a storm of spit. Decades have come and gone and all the young punks are now old men but still filled with the fire and passion of musical adventure.

The set only underlines the Skids unique position in the culture – a band born out of punk with huge ambitions, a band who were in a creative rush and helped laid the bed rock for eighties rock – time and time again you wonder how much of a debt U2 owe them soundwise and the band’s innovative and highly intelligent take on punk rock was rewriting the rule book as it went along.

Tonight the Skids are fantastic and leave you hoping that this is more than some short term comeback but a full time concern – they will rule any festival they play and need to be embraced by the Beautiful Days/Bearded Theory festivals as well as the post punk ATP set. Their futuristic vision has served them well and they sound far from dated – unique and timely and hungry.

Support tonight is from the Glam Skanks the all girl LA 4 piece who have been making a name for themselves with their recent run of shows supporting Adam Ant. Yet again their powerful post Runaways rock n roll makes a real impression with powerful blues stained vocals and a precision tight band who take no prisoners with their tough and sassy punk rock blues rush.