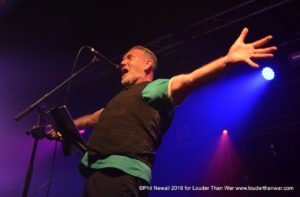 A hugely enthusiastic crowd welcomed The Skids back to Liverpool after an absence of some 35 years; much has happened… not just to Liverpool, or The Skids including the tragic loss to suicide of Stuart Adamson back in 2001.

Tonight however was a celebration of a band, who having formed in the outback of Dunfermline forged their own distinct guitar driven sound, and went on to international success with their rabble rousing anthems that carried poignant political challenges, challenges that the intervening years have neither resolved nor diminished; as such The Skids are as relevant now as then.

Frontman Richard Jobson has charisma in abundance, he looks physically fit though jokes about his age, he dominates the colour washed stage with his trademark, and self-confessed ‘dismal dance’ and scissor kicks; to be fair his antics are mere distractions from his powerful, deeply resonant voice that subtly compliments Bruce Watson’s distinctive guitar; original bassist Bill Simpson under a peaked black beret flanks to the stage left, perfectly in the groove with drummer Mike Baillie who was there for the bands third album ‘The Absolute Game’; together they craft a rock solid rhythm section that allows the interplay of Watson’s son and (without doubt) Ed Sheeran lookalike Jamie on second guitar, ably complimented by Rory Cowieson whose keyboard fully fleshes tracks like ‘Of One Skin’ from ‘Burning Cities’ right back to the majestic ‘Masquerade’.

Jobson likes to talk, his ‘day job’ certifies that, so he litters the set with anecdotes regarding his contact with Liverpool, via his brother who attended university here, he describes the bands early efforts at song writing, finding time to gently jibe Bill for wanting to record everything in a single one hour recording session; the chemistry between the band is clear; The Skids are having a ball, and their performance highlights this fact.

The set was a comprehensive journey through the bands entire catalogue from the 1978 debut EP ‘Charles’ a track that honoured a factory worker destroyed by his job, to ‘One Last Chance’ from 2017’s ‘Burning Cities’ No.2 UK album chart release.

What was evidenced was just how rich the mine of material The Skids have to plunder, we all remember the huge hits including ‘Into The Valley’ with its terrace enflaming chorus and ‘The Saints Are Coming’ rewarding us with a huge spine tingling thrill, in amongst that we get older album tracks and B-Side throwaway (“If you ask for it we won’t play it”) ‘TV Stars’ which Jobson describes as “crap” but launches into it as if transported back in time to those heady punk days; Jobson is a mass of unbridled enthusiasm, he is literally grinning the entire time – the cat that got the diary not just the cream; this feeds the audience who respond by singing and dancing, some markedly better than Jobson as he leads us through ‘Working For The Yankee Dollar’, to a mesmerising ‘Hurry On Boys’ which had the crowd in good voice, arms aloft matching the bands intensity.

The Skids delivered a stunning performance that merged the old familiar with the new, and showed quite why many of todays stadium rockers remain in debt to a group chancers from over the border.