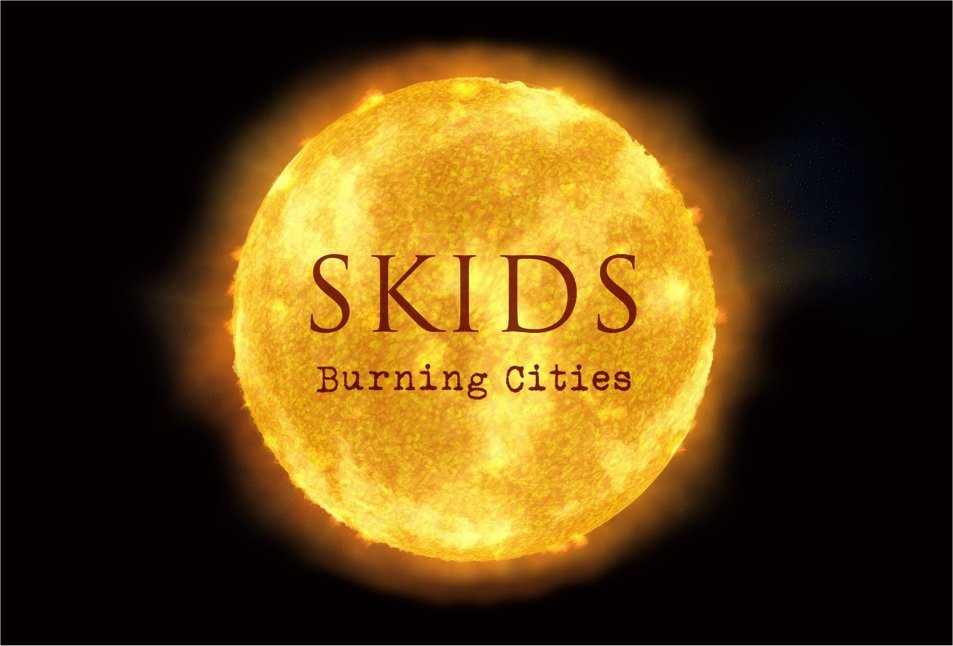 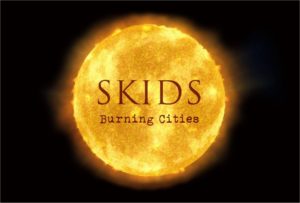 The Skids: Burning Cities  (No Bad)

A brand new album, their fifth, 36 years on from the last – can the Skids actually sound like a contemporary rock band rather than a nostalgia package?  They certainly can says Ged Babey.   (John Robb speaks to Richard Jobson here)

Who are the biggest, most popular or hippest ‘rock band’ currently?   Foo Fighters?  Royal Blood?  Arctic Monkeys?  Queens of the Stone Age?

Whoever it is – the question is:  Can the Skids – a band who formed in 1977 and split in 82 – reconvened in 2016 – compete with them?  Can they make an album that music-buying Joe Public would see as being on a par with the bands of Today?   If they get the airplay, the push, the platform – can they take off and be a best-selling contemporary rock band again – like they were in 1978 or like million-sellers Big Country were in 1983?

Based on this album they can. Or should, were there any justice in the fickle, back-biting music industry.

Burning Cities is a great 2018 rock album.  More than a ‘comeback’, not just one last tilt at the windmill.  It’s as powerful as any of there old albums.  In fact it’s arguably better overall than any recent albums by bands who the Skids influenced; the Manic Street Preachers, Green Day and even U2!

Jobbo has been talking up a storm in various media interviews;

“I’m incredibly excited about this album. This music is at the heart of everything our band is about: truth, revolution, loud guitars and a refusal to keep quiet as the establishment tries to smother chances for anyone other than its own.”

“In 1977, we were singing songs about what we saw as a world in crisis. Today that message is more relevant than ever. ‘Burning Cities’ is packed full of punk rock protest songs. It’s an album we’re very proud of – and we can’t wait to share it.”

The Skids triumphant return to touring in 2017 was built on their unsullied reputation and nostalgia to some extent but the vibe and energy meant it couldn’t end there. They had to do something new. There just had to be new material.  Luckily Jobson already knew Youth ( from Killing Joke and renowned producer) who helps to give Burning Cities it’s contemporary sound.

The production makes it gleam and sound fresh, whilst it retains all the hallmarks of prime Skids.

That said, because they were so quietly influential there are sections and sounds where you can’t help thinking – that sounds like Therapy? or Manics on first listen.  Then there are echoes of the Stooges and Sensational Alex Harvey Band at the other end of the cycle. It makes the circle complete.

The songs are great too. Anthemic without being bombastic.   Lyrically straightforward when compared to some songs of yore… but still with a male outlook that is part angry disbelief and part compassionate rallying call.

What makes it a very good album indeed is the differing pace and mood of each song…and how they knit together as a whole.  There are five faster songs which kick punk-rock arse, three slow brooding numbers and three mid-paced, chuggers that gain momentum. They are spaced evenly and my only criticism would be choosing boys-own war-story Desert Dust as the closing track.  It’s a bit too Spear of Destiny for my liking (which could well be a recommendation to some!)

Like any really great album the open salvo -first three songs- form a statement of intent and an invitation to party and a triumvarate of  Fuck Yeahs!   This Is Our World, One Last Chance and Kaputt!  do just that. Each faster than the previous… each a singalong, with plenty of opportunity to air-guitar,  they bring to mind Big Country, the Manics and the Stooges respectively… They rock so hard its almost an anti-climax when World On Fire with its cheeky Nirvana dynamic and sustained e-bow guitar appear.

“Get up get out, get on the streets / Tell everybody who you meet  / Shout from the roof, don’t be discreet..‘ is not the most subtle or poetic bit of lyricism and to be frank it’s the only other weak song… so nine crackers out of the eleven is not a bad hit rate for a band of veterans who had a couple decades out of the game.

I don’t imagine that there will be any Skids (or Big Country, Alarm, Kirk Brandon..) fans who will not consider Burning Cities anything but a massive triumph.  But like I said at the start, every Manics, Green Day and U2 fanatic should give it a listen too and it should be all over the radio.

Up On the Moors , Subbotnik, One Last Chance and Into The Void  alone would make up the best Punk/Rock EP you’d hear all year.  Rock’n’Roll? Punk Rock? Post-Punk?  Proto-Punk? – no one genre fits -they are all of the above and none of the above at the same time.  I don’t imagine for one second that the Skids sat around and made a plan to try and sound a bit like Killing Joke, a bit like the Jesus and Mary Chain and even a bit like Gold Blade  ( Subbotnik John!) – but, too me, somehow they do.

I’ve tried to be objective about this album.  Back in the late 70’s I liked the Skids, but they were never my absolute favourites….  the ones that were, naming no names,  ending up letting me and themselves down.  The Skids have retained their dignity and their reputation and despite Jobbo being a bit of a motormouth arse at times, I like the fact he tried other artistic ventures, successfully avoided the tedious day-job and still pays his respects to absent comrade Stuart Adamson.  (Check the Stuart Maconie interview)

Refugee is the slowest, moodiest and most atmospheric track on the album. A choral intro, a thunderstorm and foreshadowed echo. From 1:00 to 1:12  Ian MacCulloch seems to make an uncredited guest appearance on vocals! It’s a magnificent piece, showing what Skids are capable of.  Moving into new territory.  One foot in the past and one in the present, but looking forward…

Despite the elemental imagery: fire, darkened skies, the ocean… strangely, the overall feeling you take away from the album is one of heroism, determination and joy!

The future may seem apocalyptic and the human race doomed – but we need songs to sing to raise our spirits in the meantime. The 2017/2018 incarnation ofthe Skids intuitively seem to know this.  Their songs don’t have ‘answers’ to the ‘big questions’ but they do have a positive feel and emotional pull and create that feeling of community….. veterans of punk, post-punk, believers in art, freedom, music, expression of all ages …. naive fools  we may be… but we need something to believe in, a rallying point – and the rejuvenated Skids is as good as any and better than many….

The cities may be burning but let’s dance amidst the flames and believe in the ruins. The Skids are back, and they are on-fire!

“Here it comes, we’ve got One Last Chance…!”

Buy the album from Rough Trade  Other outlets are available.