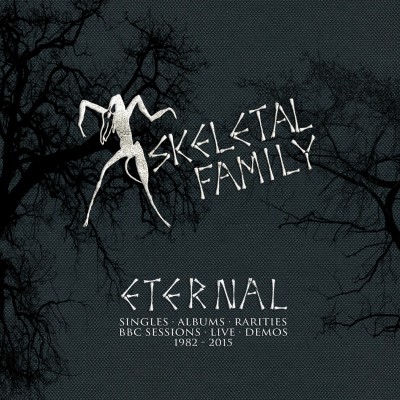 I have to admit I was never a Goth or even into the music. At the time, I was more into the first and second waves of Punk, the Dub coming out on the On-U-Sound and Ariwa labels and stuff like the TV Personalities and the Times. You couldn’t be into everything and like most people I only had the finances to cover what I was immediately interested in.

However, when the scene was emerging out of the Batcave under the slightly more expansive name of “Positive Punk”, there were one or two bands involved that I did favour, I remember being a fan of the excellent Brigandage, though they were much more on the “Punk” side of things, an irresistible sort of Pistols/Penetration mix. Blood and Roses I remember as being good as well and hearing the March Violets “Crow Baby” on the radio I was impressed, but as for the rest, hmmmm.

But bar a couple of tracks on the John Peel Show, the Skeletal Family passed me by completely. One of the leading bands on the early scene, they formed out of an X Ray Spex influenced outfit the Elements and actually came together under the Skeletal Family name (taken from the “Diamond Dogs” elpee track) when the nascent Goth scene was coalescing in late 1982. They first made their mark with the “Trees” single on their own Luggage label (boom boom!) the next year and after that were quickly signed to the York based fledgling indie label Red Rhino.

The first disc here is their debut album “Burning Oil” (though the original order has been tinkered with a bit) along with associated tracks. From this it’s clear to see the sound the Skeletals began with was heavily reliant on the first two Siouxsie and the Banshees LPs, though there were a few other influences to broaden things out a little. For instance, lead singer Anne Marie Hurst occasionally let loose oddball squawks a bit like Lene Lovich (who she was a fan of) and “Ritual” has a chugging Wilko Johnson style guitar underneath the pan-stick trappings.

All things taken into consideration, “Burning Oil” isn’t a bad record at all, given the timeframe. There’s a bit too much “binky bonky” flat sounding bass which to me will always sum up the sound of early Goth and isn’t to my taste at all, but when the band fly on the faster numbers you don’t really notice it too much.

Disc 2 deals with the follow up and associated tracks, “Futile Combat”. It’s clear that the band has worked on its sound in the interim and efforts have been made for a broader appeal with less frenetic pace. Innovations included an added brass section contributing to a few tracks and some acoustic interludes. Light seems to have been introduced into the darkness. “Far And Away” even sounds a bit like the Punky pop Rubella Ballet were turning out at the time.

The softening of the sound works in some places but in others it really doesn’t – the awful, anodyne cover version of Ben E King’s “Stand By Me” could be seen as a desperate attempt for a crossover hit, but is outweighed by what is probably their finest song in “Promised Land” (ironically these were the two sides of their fourth single). Heard here in both album and 12” versions (and also on the BBC disc too), it is a real winner with a strong hook and driving post- punk guitar.

In a lot of ways this is an odd but quite endearing era for the band as they reached the end of Hurst’s involvement. Slightly schizophrenic in their efforts to escape what was quickly becoming the Goth cul-de-sac, but there’s enough here to suggest with a third album they might have found their true niche in powerful, Punk tinged Pop with hints of a flowery sort of Psychedelia.

After “Futile Combat” Hurst left and formed the fondly remember Ghost dance with Gary Marx (ex-Sisters Of Mercy”. The remainder of the band recruited new vocalist Katrina Phillips and netted a major label contract with Chrysalis and after a couple of low profile singles fizzled out before reforming in 2002. The only evidence presented here of Phillips stint with the band is a live recording from 1985, which is presented here on disc 4 along with a set with Hurst.

The third collection brings together all their BBC works. What’s nice about this is that it doesn’t concentrate only on the Peel sessions like some collections do – John Peel was a great bloke, did a lot for music etc etc but many bands either didn’t record sessions for him for a variety of reasons or did so only sparingly, and/or did sterling work for Kid Jensen, Janice Long, Richard Skinner and (gulp) even UKIP’s favourite Cliff Richard-a-like Mike Read. It’s good to see these sessions included as the give a sense of completeness to this box and sessions for other shows by many artists are part of an important archive that has yet to have been fully appreciated.

Moving on, this BBC CD will probably the one out of this set that will have Skeletal fans salivating. The early John Peel and Kid Jensen sessions are all you would hope for: tight, energetic, and full of the nascent power of the band. Because of the necessity of the speed these tracks would have to been put down in, they’re minus too much faffing about which sometimes blighted the official releases (it was the same for a lot of bands: the BBC boffins kept things simple and clean, which more often than not meant the best results).

By the final two Janice Long sessions featured here even bearing in mind the time constraints it’s clear the Skeletal Family were moving on and the final track here “The Wizard” is a mid-point between Penetration and (gulp!) Renaissance (of “Northern Lights”, er, fame), where Punk and Prog collide and the patchouli oil flows like water. Though treading a more commercial path by this time the tracks here do not yield to any yearning for mass appeal; here it sounds like natural development.

CD 4 in this set features two live performances, one before and one after the split with singer Anne-Marie Hurst. The recording sound is a little rough on the first gig and the vocals on the shrill side for the stray opening number “Deception”, but there’s a sense of atmosphere at this Folkstone gig from 1984, even hearing snippets of the crowd conversations at times and it’s a no frills introduction to the band live.

The second performance comes from Katrina Phillips’ custodianship of the microphone at a Glasgow gig in 1986. Though she seems to add a slight refinement to the singing it’s difficult to see the join. At this point in time they’re very much the same band. Again the sound is a little bootleg-esque but an audio improvement on the earlier set. For the final selection on this disc, Sisters of Mercy alumni Andrew Eldritch and Wayne Hussey join the band for a caterwaul-fest on Dylan’s “Knocking On Heaven’s Door”.

The final disc is made up of early demos and recordings by the reformed line up – as you would suspect the quality is variable, but it’s going to be a boon for completists, who will love this box that comes complete with booklet giving a full history of the band (though I needed to get the magnifying glass out!).

In conclusion the Skeletal Family did have something a bit more interesting to offer than the standard gloom and doom Bela- Lugosi-is-actually-bearing-up-quite-well merchants, but unfortunately losing their singer at a crucial time restricted their impact. Fans will of course want this set: for interested outsiders and Goth beginners it’s also quite a good place to start as the Skeletals definitely had a bit of pop appeal and colour to entice the unsure.