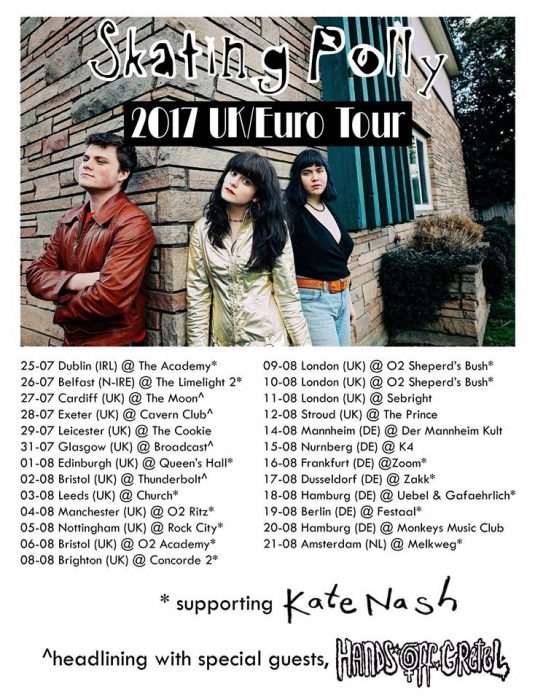 Skating Polly tour the UK and Europe: dates with Kate Nash and Hands Off Gretel in July/August 2017

Now this is very exciting.  One of the brightest and best new bands from the USA, Skating Polly return to the UK at the end of July.  The still ridiculously young band, made up of step-sisters Kelli and Peyton, have extended the line-up to include brother/step-brother Kurtis on drums.

Their latest EP  is called ‘ New Tricks’ and featured the talents of Nina Gordon and Louise Post from Veruca Salt. Videos for two of the songs thereon are hereabouts.

Half of the dates are with Kate Nash on her “Made of Bricks” 10th anniversary tour.  Kate has been a long time Skating Polly fan so it’s  very cool of her to pick them to support her, and they in turn are chuffed at the prospect.

The Pollys headlining dates see them linking up again with another great UK act Hands Off Gretel (currently working on their second album and seemingly never off the road.) The dates are below. 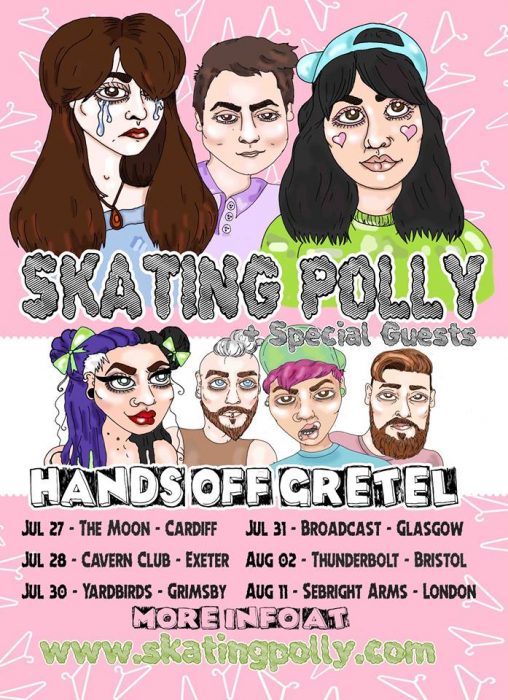 I seem to have written about Skating Polly quite a few times for Louder Than War so sod objectivity, here are the links and highlights from;

The very special support act, Oklahoma Riot Grrrl teens Skating Polly were a huge bonus. Two step-sisters aged 15 and 18, who must be the offspring of a Riot Mom and Riot Pop, swap instruments, drums and bass and bash out an amazing racket of Bratmobile style pop.  Songs about perceptions of beauty (Ugly) and “correctional juvey” with an unapologetically sloppy & screechy attitude and joie de vivre.

The songs are packed with teenage angst, doubt, cockiness,  rage, confusion and drama.  But they are not literal and linear. Some are baffling and seem to have been as influenced by Dr Seuss (The Cat In the Hat) and Roald Dahl (Matilda etc) as by Kurt and Courtney.

Now, a 52 year old man saying that about a 15 year old female songwriter may appear patronizing and crap but those books are works of genius and help younglings understand the world and introduce grotesques and surrealism and feed the imagination – so I’m not (being patronizing).   It’s actually wonderfully refreshing that they are not singing in rock’n’roll cliches, and that’s why Skating Polly are absolutely brilliant and the most interesting underground rock band in the USA today.

Skating Polly are probably the best new band to come out of the USA for years…. near-perfect.  Hit-Girls with guitars and stories to tell.

Skating Polly perform like hardened professionals, yet retain a jubilant sense of this-could-fall-apart at any moment.  They rock like the Pixies used to and friends compared them what they imagined seeing X-Ray Spex and the Slits in their early days would have been like.  I have tried to avoid labelling them ‘punk’ as that would associate them with the past, when they are the future.

Skating Polly leave me lost for words. They are just amazing. … they have made videos for all of the songs from their album and every one is a work of art.

So don’t miss them!