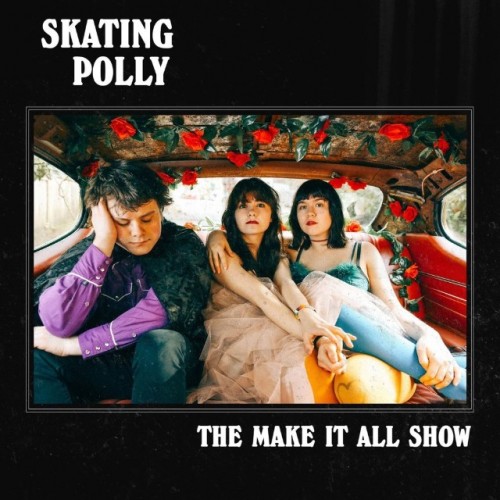 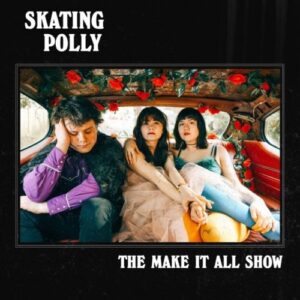 Skating Polly – The Make It All Show  (El Camino Media)

Fifth album by Oklahoma step-sisters (now with added step-brother on drums). Probably not the album which will see them breakthrough to the mainstream, says Uncle Ged Babey, because it’s just far too good for mass consumption.

When they are properly famous my ‘claim to fame’ will be that ‘I made one of Skating Polly cry’ from thousands of miles away.  Well, my review of the previous album ‘the Big Fit’ did.   “It was just so swee-eet”  Kelli told me at a magical gig nearly two years ago now.  Shortly after she nearly pushed me down a flight of stairs for telling her that her hair was ‘too Florence and the Machine’…

Now 18 and 22 respectively, playing 100 gigs a year, with Kelli’s brother Kurtis on drums, Skating Polly are slowly but surely Making America Great Again… one gig and one song at a time.

To me, Skating Polly represent the real USA – not the America of superficiality, greed and bullshit we see via the media: the America of real, funny, warm people with a joie de vivre and lust for life that feeds into it’s great comedy, brilliant music and home-grown art.

The Make It All Show is their most assured and professional work to date, but retains all their hallmarks and idiosyncrasies: light & shade, sweet & sour, joyful and reflective, lyrically and in mood.  They do Great Big American Power-Pop one minute and dynamic, squealing story-telling angst the next.

The mainstream and some online press still can’t quite seem to get over what they see as a novelty factor and ‘grunge’ influences.

Skating Polly were never a novelty. They were a relationship born out of chance and circumstance. Two girls thrown together when one of each of their birth parents met.

Meet your new step-sister. Wicked!  What shall we do?  Go to your bedroom and form the brightest, coolest, smartest band this country has ever known.  OK.

Maybe it wasn’t quite as simple as that.  The adult drama, turmoil and resolution they witnessed somehow gave rise to wonderful, naive creativity and expressive art and gave them purpose, identity and gave us some beautiful, baffling songs ( Here’s a potted history for newcomers, taken from Press Release)

The multi instrumentalist step-sister duo of Kelli Mayo and Peyton Bighorse started their band in Oklahoma in 2009. They recorded their debut album ‘Taking Over The World’ in 2010, aged just 9 and 14 years old, and achieved instant acclaim from underground music icons like X’s Exene Cervenka (who produced 2013’s ‘Lost Wonderfuls’) and Beat Happening’s Calvin Johnson (who produced 2014’s ‘Fuzz Steliacoom’.) After the release of 2016’s ‘The Big Fit’, (their first record to get a UK release) Veruca Salt’s co-frontwomen Louise Post and Nina Gordon reached out and said they wanted to write with the band. What started as a writing session ultimately became 2017’s ‘New Trick EP’. Now armed with a third member—Kelli’s brother Kurtis Mayo—the trio are about to release their latest full length, ‘The Make It All Show’.

I have evangelized Skating Polly in the past and a few people paid attention, or more likely discovered them at the same time, and have taken them to their hearts.

I don’t really want them to be too successfully now as I worry it would change them as people and as artists.

They seem to have retained an innocence and bright-eyed positivity which aligns itself nicely with a professionalism and craftswomanship as regards their song-writing.

There’s a difficult to describe, yet timeless quality to certain songs that transcends genre or era. It’s something that you can’t fake or contrive and it’s what lies at the core of Skating Polly’s music.

Kelli “This album sounds very Skating Polly, but our music’s evolved enough that you wouldn’t mistake any of these songs as being from a past record. The songs are definitely more complex.”

There are only the most fleeting references to current affairs in Trumps America: the news burns like red pepper in the eye – I guess that he is the ‘Classless Act’ referred to in the songs title.

The lyrics,  written by all three bands members  (Kurtis is not just the drummer & eye-candy for the young female audience) have reached such poised, perfect elegance as to be pure poetry in places;

The slow-build emotional epic ‘Little Girl Blue and the Battle Envy’ is a typically baffling but captivating Skating Polly song -it’s impossible to know what it is exactly ‘about’ as it’s a free-form stream of consciousness lyric – but you get an intuitive feel about the content and inspiration.

In one song there is a line : Everybody thinks they can see  / The best choice for me.. which is obviously teenage biographical – but then in This Vacation the narrator sings of ‘taking a time out so I can pretend to still feel young‘. The songs have different narrators, that switch mid-song sometimes.  Skating Polly are accessible without being an easy listen.  They are still too ‘difficult’ for the mainstream, thankfully.

Some references to the literature of childhood (Roald Dahl, Dr Suess) remain:  the monster in Free Will At Ease,  ‘Falling down the rabbit hole’ in Flatwound Strings and the squalling Camelot – where Great Aunt Kat Bjelland’s inspiration is noticeable in the dramatic enunciation.

Musically Skating Polly have evolved but lyrically they are furlongs ahead of their nearest contemporaries. Sometimes it seems like tumbling surrealist nonsense:
Don’t treat me like an answer I am not the break, the cake, erased mistakes.  (This Vacation)

And they are not without their romantic moments;   you’re a reoccuring reverie for me.

Reading through the lyrics to The Make It All Show without the music made me think of the epic Walt Whitman poem ‘Song of Myself’ -(which I only discovered via Billy Childish).

Skating Polly sing their own unique version, ( Songs of Themselves) and are great American artists and far too special, far too good, far too untamed and untranslatable for the fickle, foolish, fame-obsessed public.

They don’t need a ‘Teen Spirit’ to be the best new US band since Nirvana. They’ve had it for the past nine years…