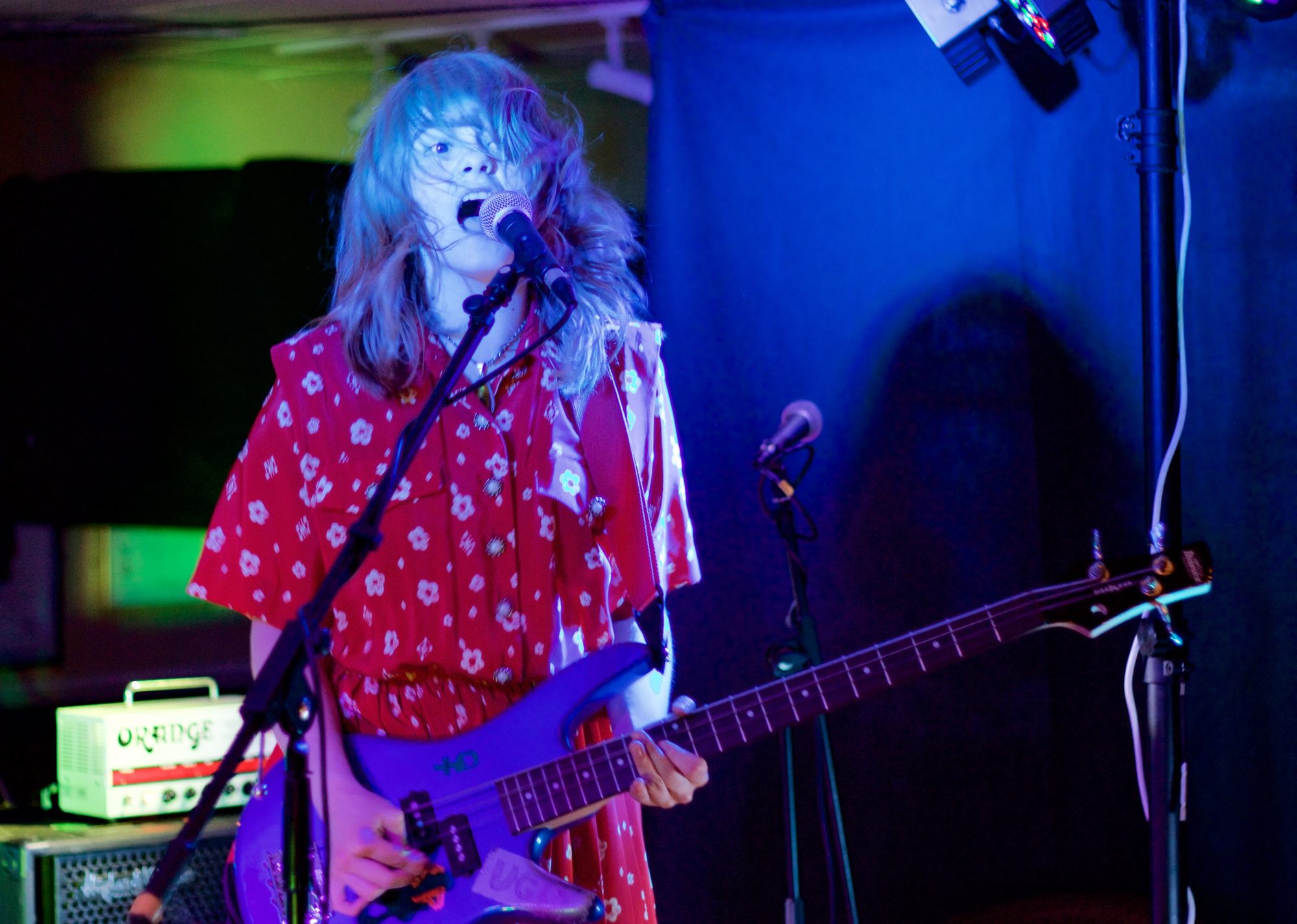 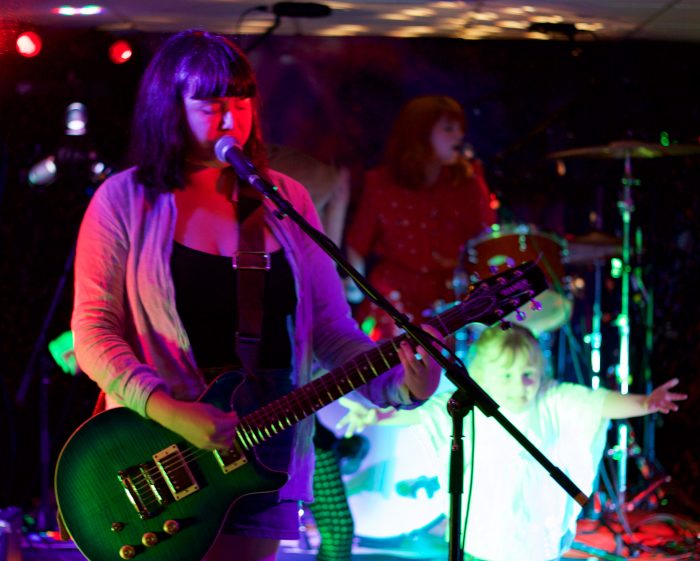 Oklahoma step-sisters bring their Ugly-Pop lo-fi grunge to the ancient cathedral city in Wiltshire to have their stage invaded by a 4-year old riot toddler and 8 year-old mega-fan.  Ged Babey feels old.

Half way through 2016, a terrible year for old rock stars going to play that big gig in the sky, so its good to find young, new blood rocking up a storm…

Skating Polly are, as I said before “probably the best new band to come out of the USA for years”  and potentially big news “Nirvana-sized Big. The ‘new ‘ White Stripes!  That is – if they want to be.” 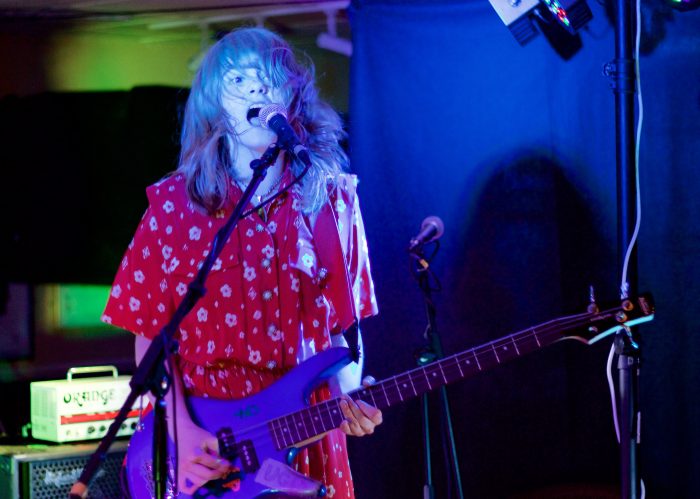 The fact that they are happy to play a venue like this in Salisbury, Wiltshire shows they have no airs and graces or grandiose plans as yet. It is the actual Royal British Legion Clubs function room (available for hire at very reasonable rates, the enterprising promoter building a stage and hiring a great PA for the occaison).

“Youngsters don’t come here because they think its gonna be full of coffin-dodgers” the doorman told me.  As it was, the ages ranged from 4 to 80, teenagers, Legion regulars, 30 something grunge-fans, 40-something goths, and 50-something former punks all happily mingled and the bar-prices are half that of any big-city pub!  Someone at the venue made a big ‘Welcome Skating Polly banner’, and it was their favourite stop on the short five date UK tour apparently.

I was pleased to see Skating Polly again because I wanted to know why my review of their Big Fit album had made them cry .

“It was just so swee-eet”  said Kelli, unintentionally treating me like a befuddled old grandpa.

“Peyton was just an emotional mess, like always”  she rolled her eyes dramatically. Not realising that her bandmate and step-sister was stood right behind her.

” I’m a whaat?” she said putting her hands on her hips and giving Kelli a mock hard stare.

Changing the subject I told Kelli I preferred her hair blonde and shorter, the longer red tresses made her look too Florence and her Machine. She gave me a hearty shove towards the stairs.

“Don’t let him back in” she commanded the bouncer. 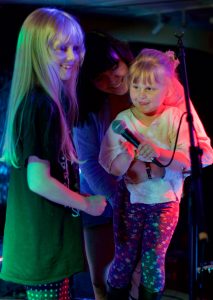 They seem to have a real bond; Kelli the brash, outgoing one and Peyton more shy and thoughtful on the face of it. Best friends and a tight musical unit with ten years experience. Before they played they were (wo)manning their merch stall and talking to a four year old who happened to be in the club and a eight year old fan.  They decided the tiny twosome should introduce the band on stage.  Normally a 4 year old would be a bit bashful, but not this one. She was insanely confident and remained onstage for the whole set jumping around and doing a flapping ‘I need a wee’ dance in her very Courtney Love style dress.  The 8 year old fan also pogo-ed and danced onstage for the entirety, much to the beaming pride of her parents.

Skating Polly started the set with the beautiful, if a little soppy, piano-led ballad ‘A Little Late’. Very much their mellow side and a gentle introduction which held the entire room spellbound.

The mood changed with riotous grunge-thrash-schreecher Hey Sweet -arguably the most Babes-In-Toyland-ish of their repertoire. Perfume for Now followed and then their classic piece of punk-rock-riot-grrrl detournement, Ugly – a song Bikini Kill would’ve been proud of.

Kelli is eminently watchable as she rocks and grimaces and rolls her expressive eyes and tosses her hair.  She has undeniably learnt a lot from Babes In Toyland but Skating Polly are no mere copyists. Whereas the Babes were a cathartic exorcism of demons, Polly are  joyful storytellers dramatizing their growing pains in song. With The Big Fit they have come into their own as proper songwriters and a fully-fledged band. It doesn’t matter at all that Kelli is only 16 – but at the same time it means everything- because she has so much potential. 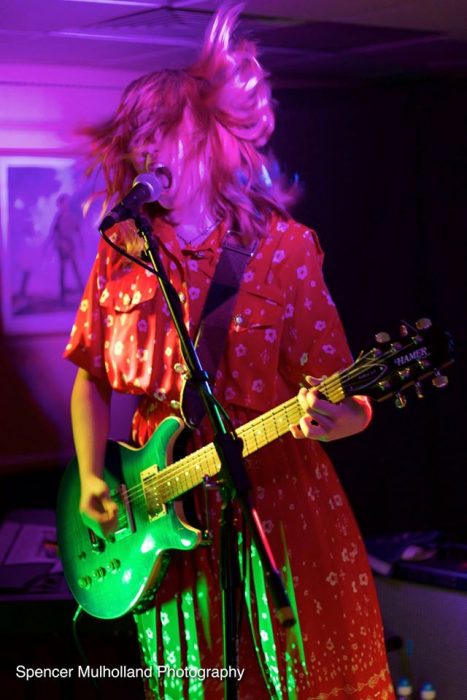 Calling their music Ugly Pop is a misnomer as its beautifully vibrant but raw pop – but without the make-up, bare-flesh and hyper-sexualisation of mainstream Pop.  This is pop with a knowing innocence, beguiling honesty and ‘charming ordinariness’ which makes it extra-ordinary.

After five songs they democratically switch places and Peyton sings her five and plays guitar whilst Kelli drums.  They each perform both roles equally well.  Peytons voice is very similar but slightly less nasal than Kelli’s which actually sounds a bit like Placebo’s Brian Moloko to me (and Gerard Way, or so I’ve read).

Literally half the set was made up of (seven) songs from latest, the Big Fit album, plus four songs from Fuzz Steillacoom and two oldies from Lost Wonderfuls closed the show.  The one which I couldn’t place, at the time  was a  cover, loud/quiet, Nirvana style of Madonnas Beautiful Stranger. 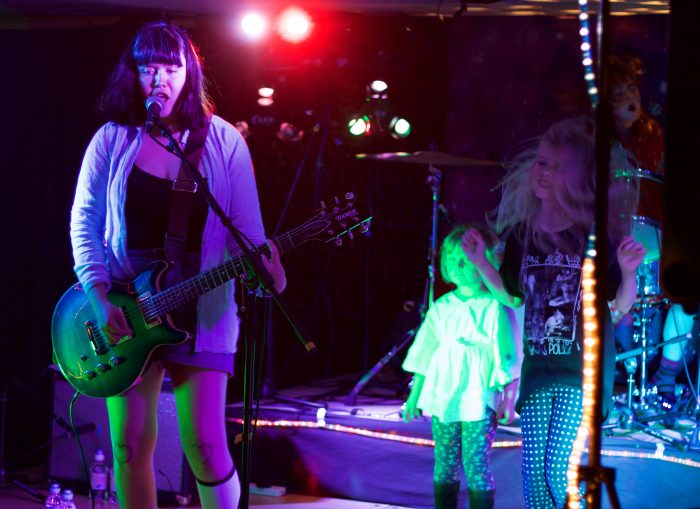 Skating Polly perform like hardened professionals, yet retain a jubilant sense of this-could-fall-apart at any moment.  They rock like the Pixies used to and friends compared them what they imagined seeing X-Ray Spex and the Slits in their early days would have been like.  I have tried to avoid labelling them ‘punk’ as that would associate them with the past, when they are the future.

Whether this ends up being a I Swear I Was There gig transforming Salisbury into the new Manchester as Skating Polly hit the big time, I don’t know – but everyone there will remember it for a long, long time… in particular eight year old Amelia whose mum said “She’s a huge fan of Skating Polly and now has all their albums, two t shirts and two pictures drawn by Kelly and Peyton and she is the happiest girl alive”.  And after being at this wonderful gig, I am the happiest …old dude ‘feeling like I’m almost 16 Again’…. because this was the Best Gig in Salisbury since the Mental, Sterile Androids, the Kitchens and Kinetic NRG played the Sarum 76 in 1979 when I was 16.

I shouted to the 4 year old on the stage as she took a breather between songs. She put her hands on her hips and shouted back…

All words by Ged Babey whose author profile is here.  Photos by Spencer Mullholland Photography.