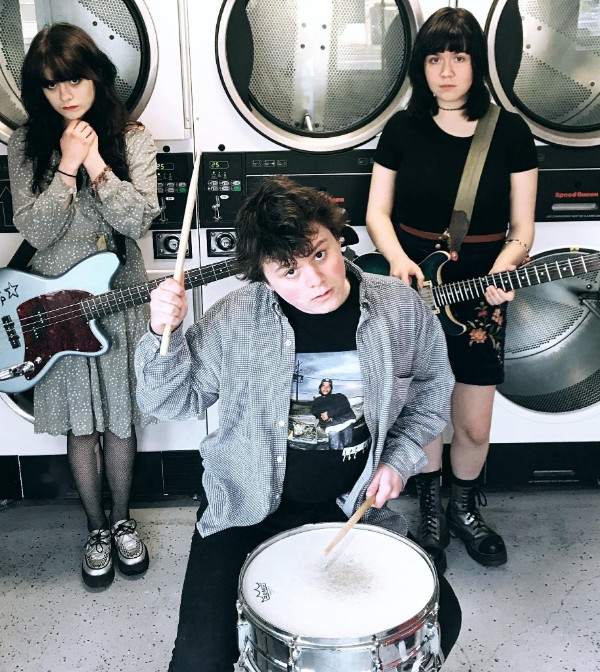 The best thing about being a part of Louderthanwar is discovering and meeting new bands who are lovely, cool people -their feet on the ground, making great art – yet you can see (and hear) that they have the potential to be, if not Cult Heroes then Superstars.  Game-changers.  Skating Polly are one such act. Skating Polly are probably the best new band to come out of the USA for years....  I wrote here,  nearly two years ago -and they played an unforgettably wonderful show in my hometown which I reviewed here.  If I had a time-machine I’d go back and enjoy it time and time again, it was one of my favourites in forty years of gig-going.  So, without further ado… the exciting news is…

Sibling punk-rock trio Skating Polly are excited to announce their new full-length album, ‘The Make It All Show’ for release on May 11th (May 4th in North America) via El Camino Media.

They are also premiering the video for “Queen For A Day”, the first new track from ‘The Make It All Show’, which features guest vocals from the song’s co-writer Exene Cervenka – the producer of the band’s 2013 album ‘Lost Wonderfuls’ and singer of seminal punk band X.

“The lyrics for this song came from a conversation we had backstage with Exene about the old game show Queen For A Day” explains Skating Polly’s Kelli Mayo. “The premise of the show was that women with tragic stories (sick children, dead husbands, poverty, etc) would compete against each other for applause from the audience. The winner would get a washing machine or whatever household prize they asked for and be crowned Queen For A Day. Months after this conversation Exene sent me lyrics in a text and we wrote the song around them. She’s singing on the second and third choruses too. We wanted the video to emulate the old show but also look like it was directed by John Waters.”

Between writing and recording this past year, Kelli, Peyton Bighorse, and Curtis Mayo have spent most of their time on the road – supporting X on two legs of their 40th anniversary tour, hitting the UK and Europe with Kate Nash, playing Riot Fest and zig-zagging across the country on multiple headline tours.

With ages ranging between 17 and 21, Skating Polly continue to produce music well beyond their quantifiable years and ‘The Make It All Show’ is clearly reflective of a band at its tightest and most confident – expanding on the dynamic song structures, harmonies and melodies explored on ‘New Trick’.

Skating Polly’s new album ‘The Make It All Show’ is out May 11th on El Camino Media.

Here is the  new video for “Queen For A Day”…

The track will be available to stream or purchase via all DSPs this Friday, March 2nd.

The band will go on a West Coast US tour with The Go! Team next month, followed by a North American tour this Spring with Charly Bliss. UK dates will follow later in 2018.

Based on this video and song alone, they do seem to have refined their sound, but without actually changing their essence of sweetness and sharpness, humour and cynicism, loud/quiet, light and shade.  The feminist politics of the lyric and video is neatly framed in accessible alt-pop and bodes well for the content of the album.  My ‘American nieces’ are growing up and need to stay strong and proud and angry coming from the country they do.  America Needs Skating Polly. And so do we…. can’t wait to hear the album.

(Oh, and who else thought of THIS when they heard the song title?)