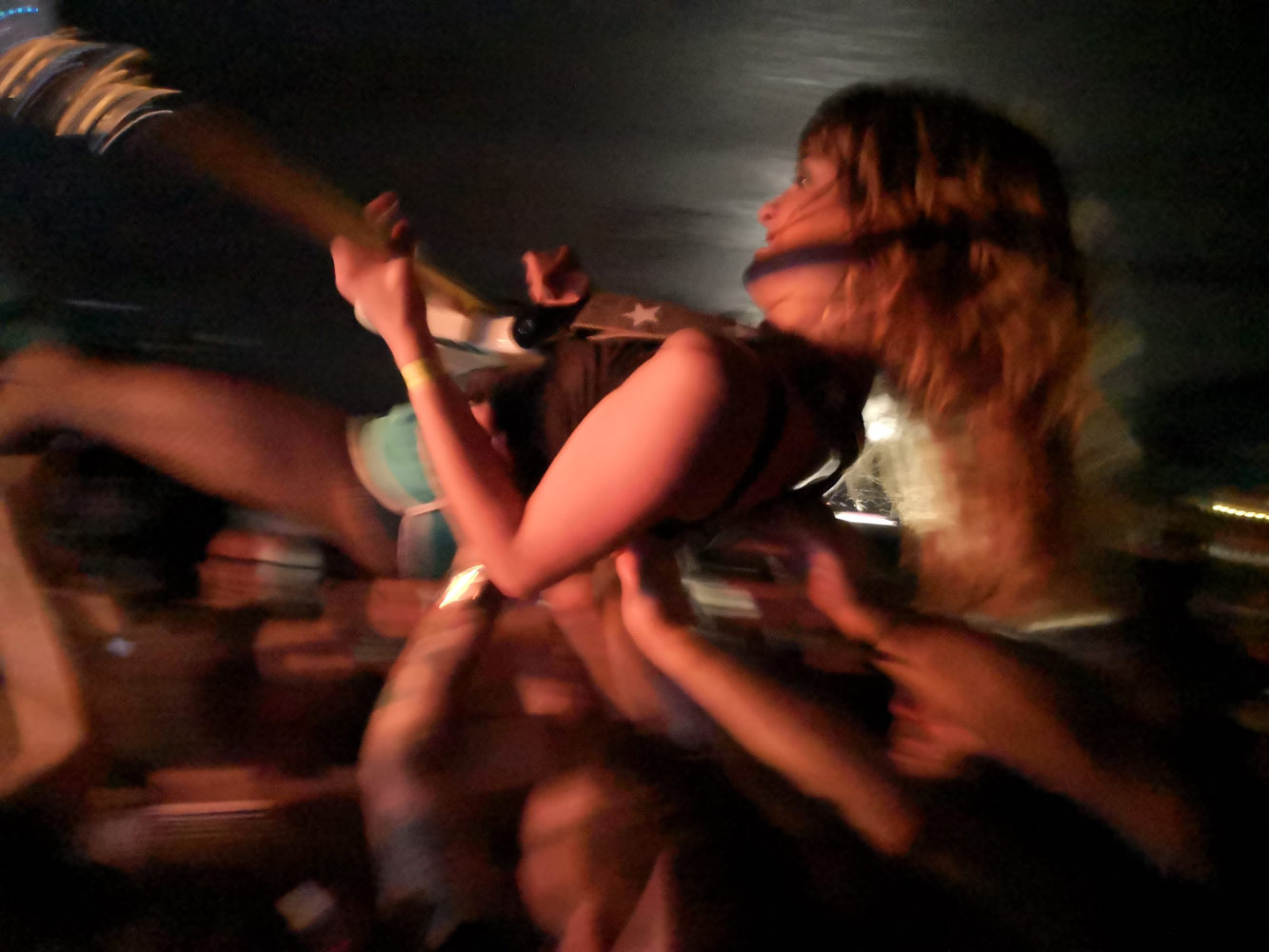 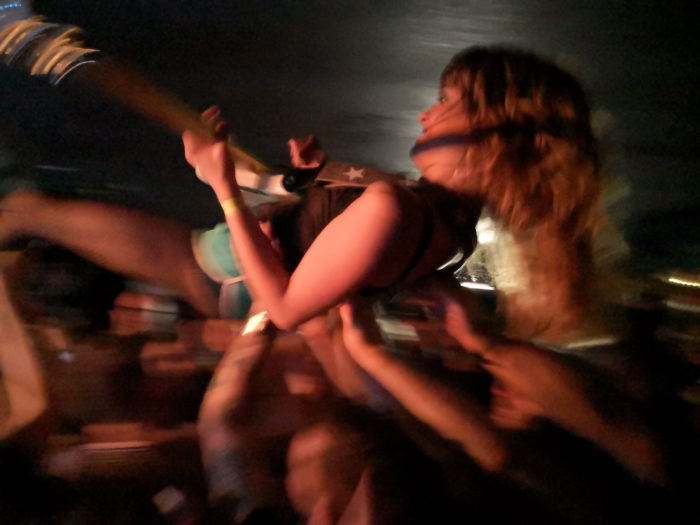 Skating Polly and the Menstrual Cramps at the Sebright Arms, Shoreditch, 10/09/2018 – live review by Vicki Thompson

I arrive to find an almost empty room when I potter downstairs to the basement venue at the Sebright Arms – but I’m too early. I head upstairs to kill time, and find that I’m in a classic London public house – stained glass above its beautiful wooden bar, fairy lights and hanging ivy in the corners, a good beer selection on tap or by the bottle, plus a few nice whiskies if you’re partial, too!
I meet a stranger at the bar who I make idle chit-chat with, and I ask her when the band starts, to which her reply was, “Oh, not until half 9″, meaning Skating Polly. I tell her the support act are really great and worth watching too, to which she replies, “Yeah, I really want to check them out!”, proceeding to order a plate of cheese fries that will almost certainly arrive during their set.

I dive back down the rabbit hole to find that the venue is now beginning to fill up. I move in close to the front to get a good view, and singer Emilia is already on stage, crouched down. She asks a friend in the crowd “Is it time? Should we start?” Within moments we’re dancing away to the first track of the Menstrual Cramps set – Hashtag Sad Penis, which features on their last release, We’re Not Ovaryacting. Emilia is sporting a hand-drawn shirt design to further drive the point home, featuring a crying aubergine with the words “No more dick pics” emblazoned beneath. The first track sets a high energy bar for the night and captivates their audience. I was at their very first show a few years back, and every time I’ve seen them since that debut, they’ve never failed to replicate the same energy they had that night. You can’t help but cheer them on. 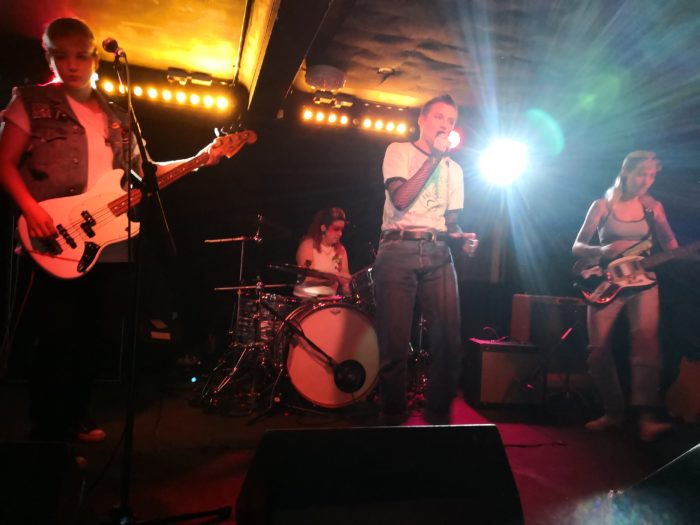 I love how much of themselves they throw into their music. Between songs, they talk about the rejection they’ve had from the old-guard of the punk scene, particularly from Nazis (but who’d want their acceptance?!) who’ve told them they have no place to be making this music, that they “weren’t there” and they have no business existing. This I can relate to a lot, as a performer in the black metal scene [ed: Vicki plays in the band Formicarius]. The rejection and estrangement I’ve felt from other artists who don’t believe a woman should play this sort of music (and have no problem telling you this), the idiotic elitists who idolise some of the more questionable roots of the genre, and the struggle to make yourself heard against the vitriol. I salute the Menstrual Cramps for taking the backlash against them and turning it on its head; for using their voices and subverting their negative experiences for the creation of great art. They turned all this into a song called Neo Nazi, which went down a storm.

The rest of their set continues the trend – they play magnificently, wearing their hearts and their politics on their sleeves as ever. We fling ourselves about to their anthem I like that top inspired by the gentrification of Bristol. We are told not to separate art from its artist, and not to idolise our Idols – words which cause a stir in me, and ring a parallel once again to the black metal scene that is often guilty of both charges. Unabashed, unashamed and a real entertainment, the Menstrual Cramps go out to thunderous, well-deserved applause. A fun and thought-provoking set, featuring a mix of songs from their previous release and their new album, Freebleedin’.

A quick dive up and back downstairs later, Skating Polly haven’t even started yet but I’m already in awe of their stage outfits as they set up. Red silks and collars, white fringe, hearts tattooed on knees and so much rock n roll glamour! They’re just as I remember them from Bristol, supporting Babes in Toyland about three years ago. My hype builds as much as the lime and soda I was given on the house upstairs bubbles in my hands. I’m near the front again, but with not quite as clear a view as I had for the Menstrual Cramps. And the demographic of the crowd around me has changed somewhat. For the Cramps I had a gaggle of other young (mostly) women dancing with and around me, but for Skating Polly I note that I am surrounded by older dudes. One of them has terrible B.O. 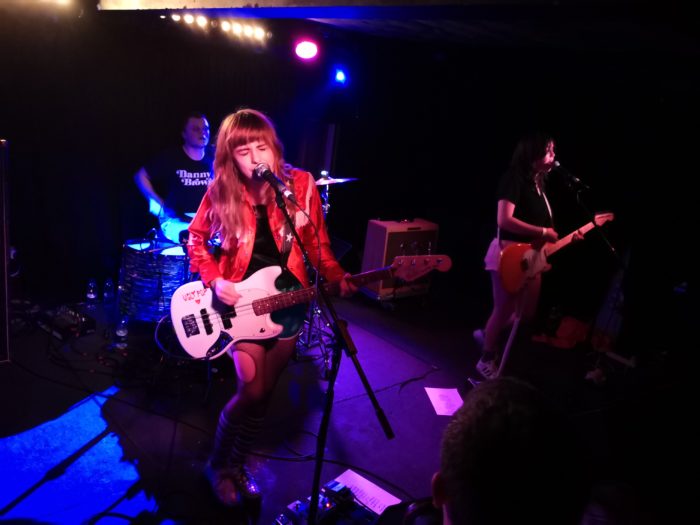 As Skating Polly start playing, it dawns on me that nearly all of them are photographers, and they’re really quite tall. They mob in front of me, and being fairly short I have no choice but to climb onto a nearby step at the side of the stage to be able to see at all, which sucks. “Oh well, three song rule,” I think to myself.

But they don’t leave after three songs and stay put, taking photos for the entire set.

I try not to let it dampen my enjoyment too much, and it doesn’t, for sisters and brother (a new addition!) trio Skating Polly are incredibly entertaining, playing a super dynamic show for us. Their star power shines over any technical issues (“it wouldn’t be ‘Ugly Pop’ if everything fucking worked!” cries Kelli as the snare drum breaks), and their vocal talent and instrument-swapping dazzles throughout. Everyone sings along and it’s a little bit magical. They wow us with another high energy start to the set, just as their support act did, and tell us that a new video of theirs for their song, Free Will At Ease has literally just dropped over in the States, which they then play for us. This one’s a song led by Peyton, about healing from a shitty past relationship, something that anyone could relate to.

Once again, I admire how much of themselves they put into the music. Kelli tells us a story as she tunes her 3 string white Fender bass, about a guy back in Oklahoma who said he hated her music, especially “that screamy shit she did”. So in defiant retaliation she wrote the “most screamiest, most shittiest song she could”. She plays it and screams wide-eyed and furious into the microphone as she high-kicks the air, everyone eating it up. Their pacing is on point, giving the audience a chance to mellow down between high energy numbers with quieter, more thoughtful tracks like Little Girl Blue and the Battle Envy from their new album, The Make It All Show. Towards the end of the night, Kelli dives into the crowd to crowd surf almost against the roof of the sweatbox venue as she continues playing, which was badass as hell.

And that says it all really. Overall, a fantastic night! A bit of a shame about the photographers obscuring the view thoughout Skating Polly, but it didn’t ruin the night. I would urge any London promoters to enforce the “three song rule” more strictly in venues without especially elevated stages. And you, dear reader, if you ever get the chance to watch either band, you should. I picked up both bands’ latest releases at the merch tables and neither fail to impress.