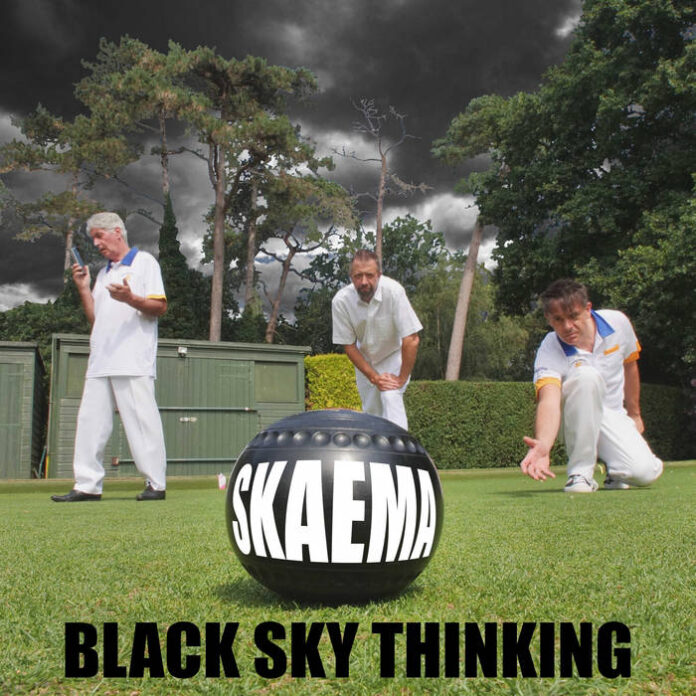 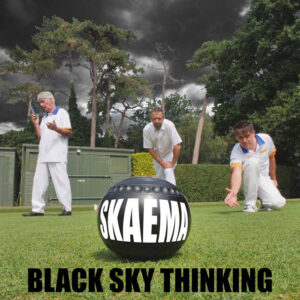 CD and Digitally – Out Now

When I get something sent to me or recommended, I always try to listen before reading a biography or seeking out information on Facebook or Twitter. My first listen to SKAEMA’s album had me picking out influences from the off, the band clearly displaying their love of The Damned and the Stranglers with a bit of Motorhead thrown in for good measure.

From the opening, almost snarling, Meet Market, telling of a seedy night on the town, the tone is set. The album really rips along with chiming guitars punctured by occasional synths and underpinned by a solid rhythm section. It’s a record you can imagine being played live, one where the bass will be punching you in the chest (it made me realise how much I’ve missed gigs!)

Rather than me talking though every track I’d wholeheartedly recommend people go and stream it or buy the CD. That said, there are a couple of highlights to call out, the first being Fence Sitter. It starts in the in the style of Art Brut’s Eddie Argos backed by Clint Boon on ecstasy before entering what feels like a lengthy jam. It’s only the 2nd track on the album and lasts just over 4 mins but feels like an epic set closer. The other is The Ballad of Gianni Pollo. Sadly, instrumentals don’t appear on enough albums nowadays. It’s a gentle piano led breather which took me straight back to my teenage years and listening to Madness. (Waiter!)

Unlike most ‘new’ bands I found that Neil, Duncan and Peter aren’t the kids who discovered their Dad’s record collections, they are the Dads! Now it would be inappropriate to guess their actual ages however I would say they could be in the demographic you’d expect to be investing in a sports car or Harley-Davidson to recapture their youth. Maybe the sports car cliche is now out of date and approaching the way of approaching this ‘time of life’ is by forming a band!

At this point I knew I would have to sit down and talk to them. Music aside, I’m conscious that SKAEMA will be the sum of its parts and there is likely to be a story behind the band. Black Sky Thinking is a terrific album, and it would be unfair to allow anyone to come away with the impression it was a ‘vanity project’.

SKAEMA remind me of a hard-working band midlands-based band I’ve known since the mid 90’s called Vaseline. They also are of a similar age and have similar influences, and like hundreds of bands up and down the country, may not be household names or have received critical acclaim in the media but their passion for music is just as alive and real.

LTW: SKAEMA were formed in 2016 but I’m curious what had gone before?

Neil Phillips (guitar/vocals/synth): Quite a bit led up to the formation of SKAEMA in 2016. But actually, it started many years before then. I got a bass when I was a teenager and started playing that before trying my hand at drums. By my 30s I had decided that I wanted to be a frontman.

Duncan (bass) on the other hand learned piano and clarinet from an early age, before ultimately moving on to the bass and playing in a metal covers band. He then joined an originals indie rock band called People True Love and was playing venues such as Exeter Cavern Club and Phoenix but going to university meant that he couldn’t do both and stopped playing until some 20-odd years later when we got together early 2016. We got a drummer about 6 months later and the SKAEMA line up was complete. From there we recorded the ‘Happy Daze EP’ and our debut album ‘Tales Of The Expected’. The original drummer moved on to other things and Peter came onto the skins in 2019. His jazz style of playing added a different dimension to the band’s sound.

LTW: What was the spark to form the band? (Midlife crisis? 😁)

Neil: Ha ha, maybe! We do joke sometimes that it is and some guys our age decide to start playing golf or buy a lairy motorbike, we chose to jump around on-stage making loads of noise with songs nobody knows. But it all came by chance really. Duncan and I actually met through our kids being in the same class at school. I was aware that he lived in the same area of town as me and suggested we go out for a couple of pints at the local. After spending most of the evening talking about kids, school, work and family and the usual stuff, the subject of music came around.

I had been writing and home-recording my own material for a couple of years and turns out he played bass. That’s where it all started and we began playing together, first of all at open mic nights around Poole and Bournemouth, however it soon became apparent that our style and sound wasn’t really suited to that. So once the band was up-and-running we turned our attention to playing small venues and pubs in the local and surrounding area. But the real spark comes from our love of creating our own music and seeing people enjoy it.

Neil: We all do completely different things for day jobs. I help and rehabilitate young people and am training to be a counsellor, Peter (drums) is a sparky and Duncan is a marketing manager, which comes in handy for designing album artwork and band promotion stuff!

LTW: Where does the name SKAEMA come from?

Neil: I had always found peoples behaviour fascinating. I was sat in a meeting at work one day reviewing mental health and one of the psychologists mentioned about a person’s schema. It was kind of a lightbulb moment for the band’s name as a lot of the songs are written as observations on society as well as people’s lives and traits so fitted the bill well. But when we checked it out, there was already a band with that name, so I tweaked the spelling a bit and it was sorted. Mind you, we do get some interesting pronunciations on radio!

LTW: You wear your punk/post-punk influences on your sleeve. Are the likes of The Stranglers and The Damned bands you’ve followed since your school days?

Neil: As a youngster, I was brought up in a household of ‘70s music and I loved the melodies. Come the ‘80s and at school, a mate lent me a copy of Vengeance (New Model Army) and that just changed my life and I loved the dancing bassline. From there, I discovered The Damned, The Stranglers, The Fall and The Cramps… that set my course for life. Duncan on the other hand was into his metal and some pretty heavy stuff too – Anthrax, Megadeth, Metallica, Suicidal Tendencies and the like. But like me he was enthused by the bass, using it more as a lead instrument and that really comes out in all of our work. All these influences come together and gives SKAEMA it’s edgy, angry sound.

LTW: Being a Northerner I’m only really aware of The Joiners in Southampton. Pre-Covid was there a good scene in Dorset. Do you get to watch many gigs?

Neil: There are a couple of good venues in Bournemouth and Southampton; as well as The Joiners (which you know about), we have O2 Academy in Boscombe, where over the past couple of years we have seen The Stranglers, The Damned, Ned’s Atomic Dustbin and The Wonderstuff. Apart from that we have The 1865 in Southampton and a bit further out, The Wedgewood Rooms in Portsmouth.

That is OK for larger more well-known acts. Nothing in Poole itself though. But generally, the music scene isn’t as vibrant here as in the Midlands, Manchester or Leeds say and unless you are a covers band, it’s pretty difficult getting gigs and there are only a handful of places that appreciate original music. Actually, the closing track (and last single) on our first album was written about that very topic. It’s called ‘The Scene’ and we hooked up with Music Venue Trust to highlight the struggle that grass roots music venues face.

LTW: From your Social Media I can see you play several gigs on the South Coast. Do you have a burning desire to tour or play ‘major cities?

Neil: Yeah, absolutely. It would be a dream come true to play some major towns and cities, maybe supporting another band on the back of a UK tour.

LTW: Both of your albums are original compositions. Was this a conscious decision when you formed that you didn’t want to fall into being a ‘covers’ band?

Neil: 100%. We have always taken the view that if you can play and write, then why do covers? We actually tried a couple in rehearsal and they sounded bad, like we were a firkin high school band. I know that taking that stance makes it difficult for us to get gigs, acceptance and I have lost count the number of times people have said to us “you guys are pretty good, but I don’t know what you are playing. It would be better if you did some covers”. But we are sticking to our guns and it’s paying off. People now see that we have 3 studio recordings out there and are now sitting up and taking notice of us. That said we are thinking about doing a cheeky one in the future, but that will be all.

LTW: Are you looking forward to getting out and playing gigs over the coming months?

Neil: Too right, it has been a long time. We enjoy putting our stuff out there, meeting people and seeing their reaction when we play. There is something about live that you just can’t beat. The energy, feeling the sound. We have got a few lined up already for 2021 with hopefully more to come. We can’t wait.

LTW: If push comes to shove, what are the SKAEMA Top 5 singles of all time

Neil: Ha. I am going to have to give you a list from each of us, since we all come from different musical backgrounds. So here goes. For me, my top five has to be 1) Great Expectations (New Model Army), 2) New Rose (The Damned), 3) Peaches (The Stranglers), 4) Totally Wired (The Fall), 5) Concrete Jungle (The Specials).

Peter’s list is quite a bit different and includes 1) Strange Brew (Cream), 2) Sultans Of Swing (Dire Straits), 3) Born To Run (Bruce Springsteen), 4) Won’t Get Fooled Again (The Who) and 5) Steamy Windows (Tina Turner). But ask him again tomorrow and I reckon you will get a completely different five!