Home Festivals Six Of The Best Sets At Loftas Fest 2020 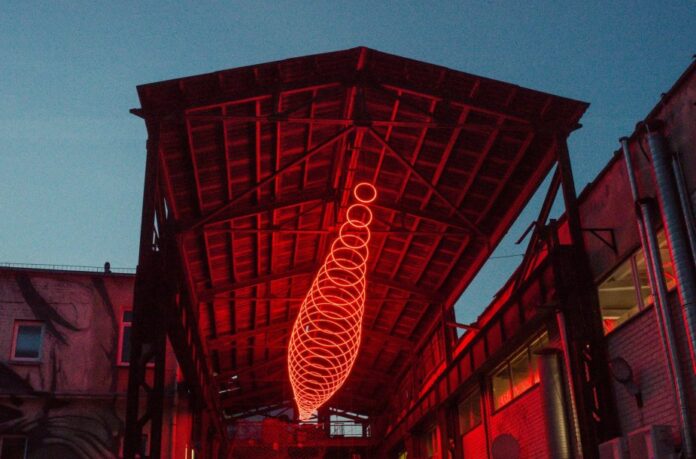 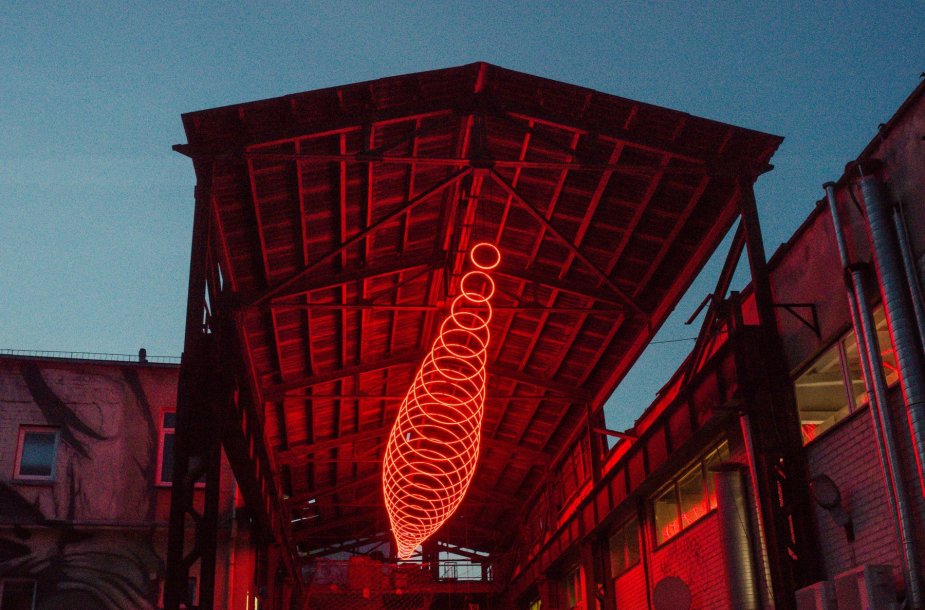 It’s predominantly local acts on display at Loftas Fest this year (Thursday 10 – Sunday 13 September). Loftas, like the few festivals which happen in real life during the Covid era, has had to scale back to ensure it can proceed. Gone are the big international names – the likes of Modeselektor, Shame and Shortparis were on the bill last year – and in are acts predominantly from beautiful Lithuania. There’s only three acts on the bill to come from abroad and arrive from Estonia, Latvia and Belarus.

Similarly, Louder Than War is the only international journalist visiting, and it was touch and go as to whether that would happen at all. Yet it happens because we arrive from Latvia, which has low Covid-19 cases, so unlike most foreign visitors, there is no 14-day quarantine upon arrival.

It is fairly eerie compared with our trip to this fest last year and the hotel is at only 20 percent capacity. The international music industry delegates and festival goers who usually loiter the lobby and are familiar faces at international showcase festivals (What’s Next In Music? co-curates Loftas Fest and is the showcase arm) are eerily absent.

The organisers decision to go ahead with it was sparked when the government made it legal from 1st September for an unlimited number of people can gather indoors or out. Gatherings can occur so long as one-metre distance is kept and a mask is worn. To make guests comfortable, there are temperature checks by security on arrival, free replacement masks and health advice on site. To boot, Louder Than War’s personal space never once feels invaded during a respectful event.

Loftas Fest, which receives 4300 festival-goers at its Friday peak this year, is held at a club venue with a generous outdoor area and outbuildings – it’s the site of a Soviet-era radio factory. It’s the most active cultural venue in Vilnius and just a short walk from the UNESCO old town. It feels gentrified but not overly so: there’s a gritty underground party feel with the brioche bun side of things kept to a minimum.

Keeping intact the essence of what was there before means when you walk towards the Loftas Fest gates, it looks like you’re heading into a dead industrial end; but things start to slowly unravel: you start to see attractive surrealist murals on otherwise drab concrete walls; seemingly disused pockets of workshops space kitted out with PA’s where DJ’s blast heavy beats; two outdoor festival stages spectacularly lit up, and a busy food court teems with life as soulful records are played. There’s also the main indoor club, which is where you’d want to play if you’re a decent sized band on tour – the soundsystem is astounding. At max capacity, seven stages are lit up this year and the music is carefully curated to ensure a top-notch deep dive into the scene. And of the bands Louder Than War manages to catch on the vast line-up, these are the ones that make this year’s trip to artsy, architecturally astounding Vilnius, most memorable.

The first band LTW sees on the opening night (Thursday) is EGOMAŠINA on the main stage. The band is a (Lithuanian) west coast garage punk trio who formed in their hometown, Klaipėda, over their mutual love of BMXing. Having moved to the capital Vilnius, the band have steadily worked their way to the top of the local scene and has just released one of the most positively reviewed albums by any Lithuanian rock band this year – the ‘Spastai’ LP is a fantastic find.

Live, their sound is hard, fast, and exhilarating. EGOMAŠINA’s gnarly mesh of Ty Segall electric guitar, stylishly monochrome monotonous basslines, bludgeoning stabs of from bulky vintage electronic gear, and reverb-drenched vocals cast a beguiling spell on the crowd. A trombone solo on the final tune shows their versatility musically and each member can handle vocals. A top, top band to see live. 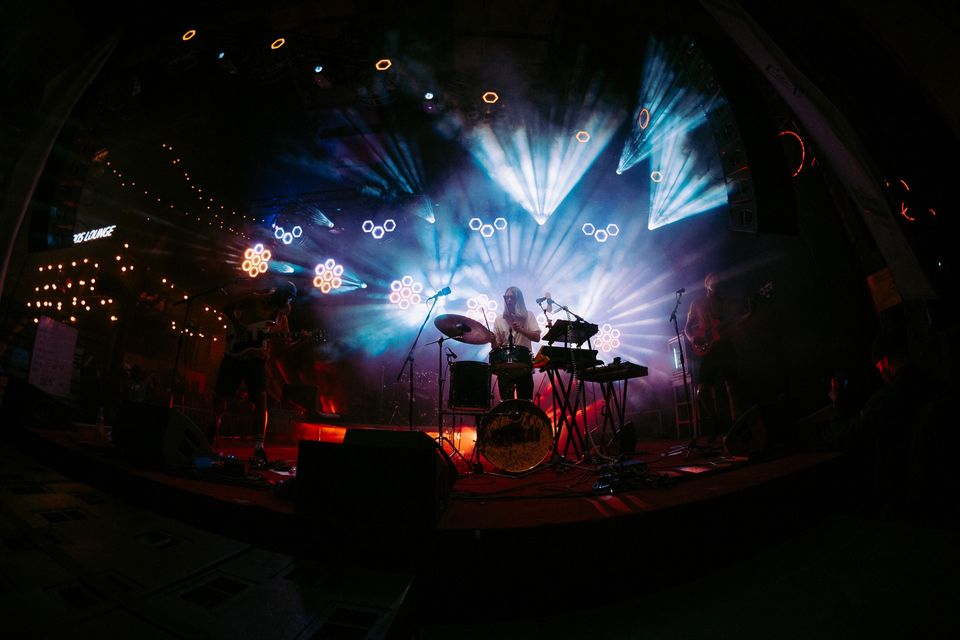 Three-piece Timid Kooky then follow on the main open-air stage with a leather and snakeskin-clad raw, rough rock n’ roll show that’s partly influenced by Queens Of The Stone Age and Primus. The louche vocal style and flashy guitars come across glue-tight. Pushing each other to the brink of their physical limit, they bring things to a close when the bassist climbs the PA whilst shrouded in plumes of smoke as the singer enters the moshpit for a bombastic finale. 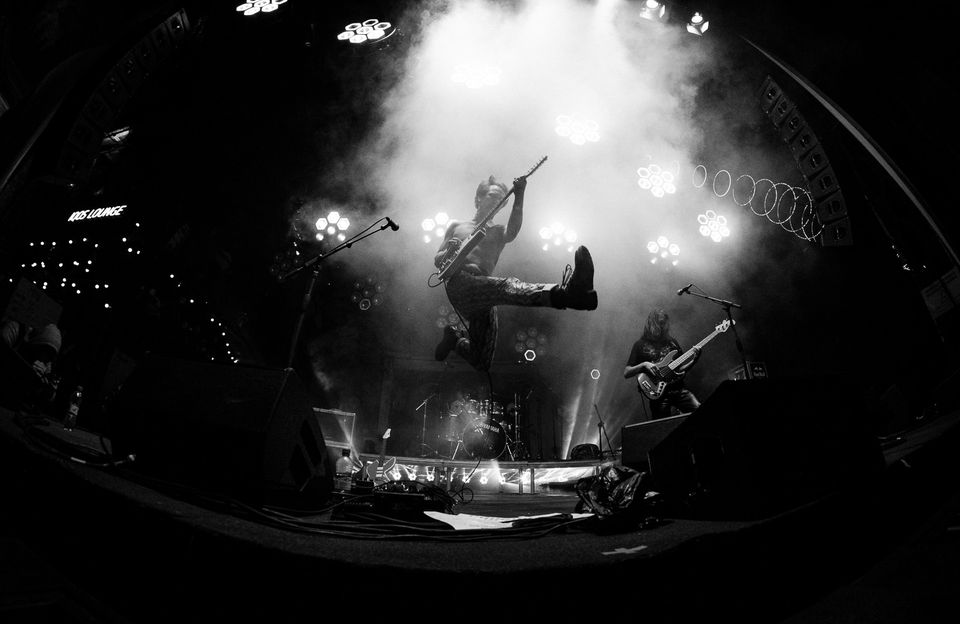 Viscerally thrilling rock with no planned stage moves makes way for trad folk-tinged musical theatre troupe from Baltic sea city Klaipėda called Graži ir ta galinga (the English translation is Beautiful and that powerful) for Friday’s highlight. Dressed in matching red, this five-piece girl band sing in a beautifully confident, light-hearted way in Lithuanian with the expressive diction you’d expect from actors. That’s then coupled with the musicality of top-level musicians. Such buoyant music then juxtaposes with some thought-provoking meditations on Lithuanian feminity in the lyrics – another layer to delve into should you be proficient in Lithuanian. Even not knowing the words, the whole vibe of the show conveys such beautiful energy that we can’t help but be thrilled to our core. 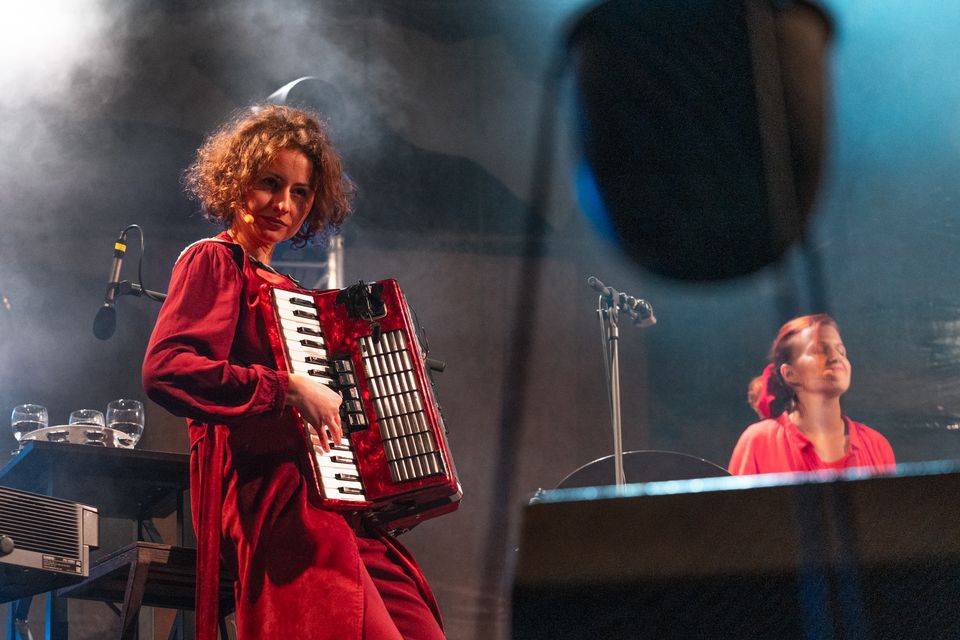 Minsk-based brutalist pop trio Dlina Volny just signed to US label Italians Do It Better, and arrive in Vilnius in a cloud of hype for their performance on the What’s Next In Music? showcase stage. A slot which happens to be the band’s first-ever international showcase gig. Yes, the band has every possibility of breaking internationally; but this show is poignant for another reason: they arrive from Belarus when pro-democracy protestors – who oppose Belarus’ self-appointed President Alexander Lukashenko authoritarian grip – have been met with a violent, terrifying police crackdown.

A highlight from their set comes as they perform their anthemic latest single ‘Whatever Happens Next’ live for the first time in the band’s history. Lyrically, it deals head-on with the crackdown that leaves residents living in fear and also the bravery of those demonstrating:

Singing their personal experience to an audience who mostly only experience first-hand accounts of such protests through media simulacrum feels vital. So hats off to What’s Next In Music? organiser Vilma Dzienaite for helping make it happen: 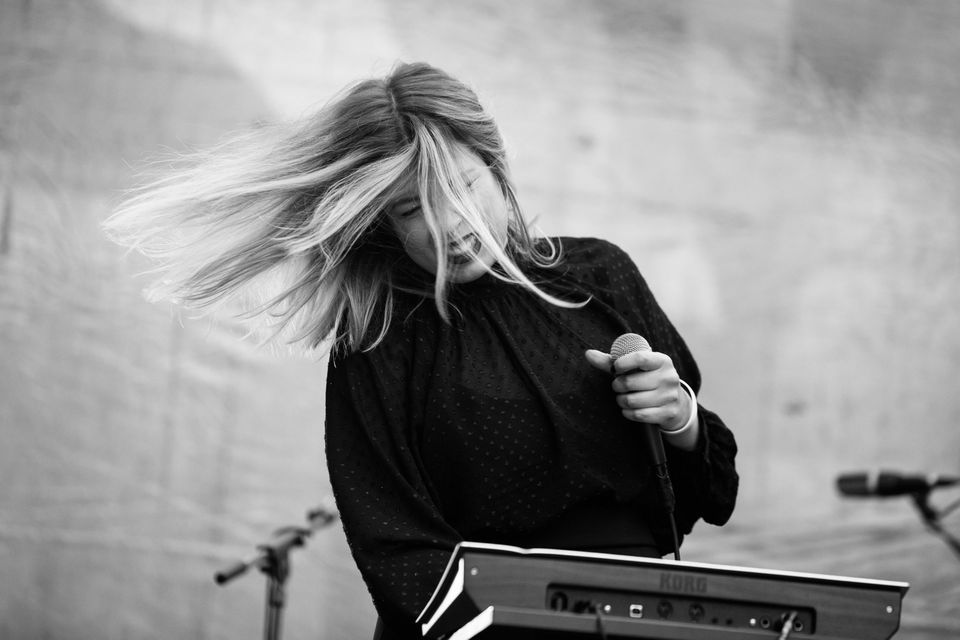 Mart Avi’s music, by contrast, offers something less didactic than Dlina Volny and sonically more difficult to pin down. “Is there drum n bass here, mate?” says a group of friendly enough people to me just as he’s about to start. “Yeah, sure…” I reply. What ensues certainly incorporates elements of drum n’ bass – well, jungle more specifically – but that’s only a brief part: the electronic music he makes is incredibly experimental with some ties to Gazelle Twin’s jarring genius. Mart Avi’s vocals meanwhile often lathered in reverb and delay, often get deserving parallels to Bowie and Scott Walker. Couple this with the Adam Curtis-esque feel of his self-directed cinema montage and it’s no wonder we’re so enveloped in his weird world. 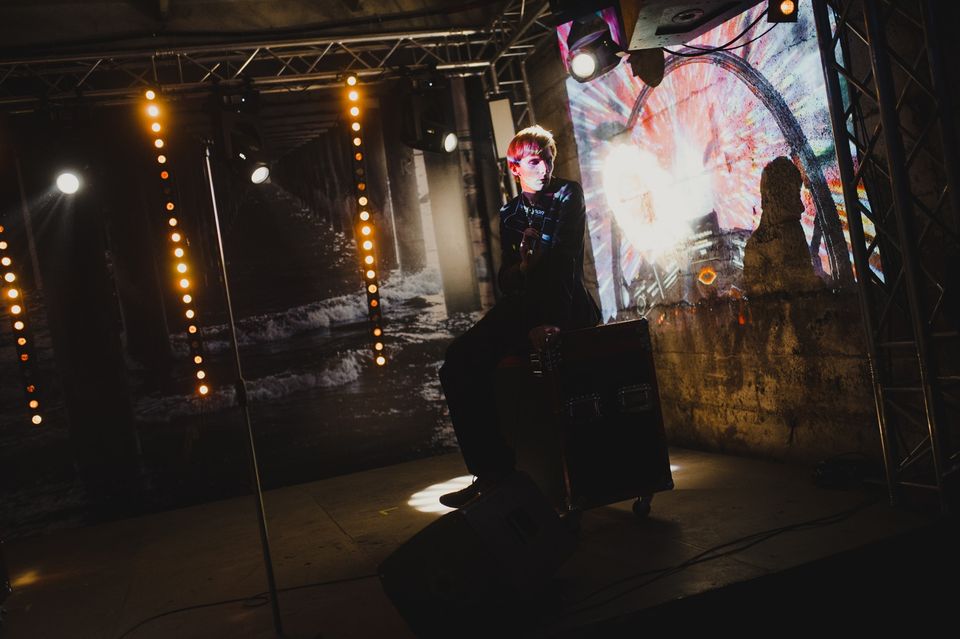 Evija Vēbere, who soon follows Avi, is one of the most popular experimental electronic artists in Latvia, and rightfully so. The artists alluring vocals have a whisper-like ethereal tone that’s compelling to hear when set against her backdrop of evocative, dark modular synth playing. That and a slew of other electronic gear is used to craft her soundscape. A lot of the artist’s set is used to move the listener through different experimental pieces, but that’s then met with some serious bangers. The most recognisable song is set closer ‘Mīlniekiem un Visādiem Citiem’, which has become a perennial spin on the LTW stereo. There’s a great video of it filmed in a VHS aesthetic and you’ll see her levitating in the Latvian forest in the spooky clip.

Thanking the audience after her triumphant rendition of the above mentioned song, the singer and multi-instrumentalist bows out with praise for the crowd, saying it’s been a pleasure to play for us and it’s a really great vibe. You can tell it’s heartfelt, and her enthusiasm for the fest is definitely shared by LTW. This city festival dreamland in this once crumbling factory is remarkable. And even when up against the most extreme logistical challenges, they pull it off in style. Long may Loftas keep doing this. 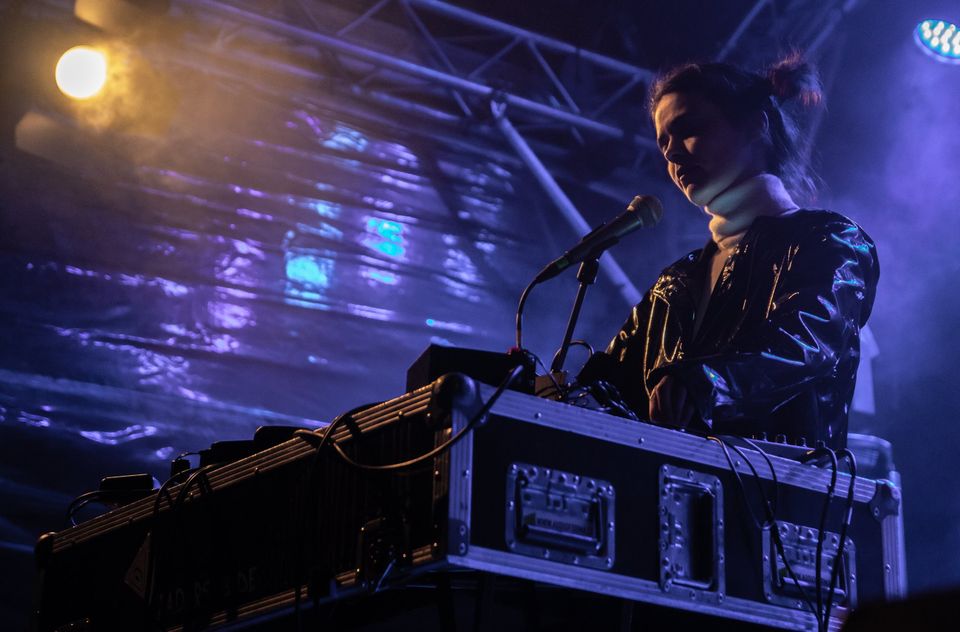 Louder Than War’s Loftas festival invitation came courtesy of What’s Next In Music?, the successor of Vilnius Music Week, which ran 2012 – 2015. LTW boss John Robb discovered another great Minsk band there in 2014 – Super Besse – and subsequently released their single on Louder Than War records. This year, three of our highlights (Dlina Volny, Mart Avi and Evija Vēbere) were on the What’s Next In Music? stages and show the organisation’s deep knowledge for the best new music from Eastern Europe and beyond. Discover more about What’s Next In Music here.