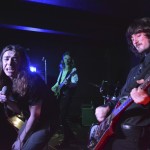 The farewell to a Manchester music institution is marked in fine style by a brash, uncompromising set from Sittin’ Pretty.

The Ducie Bridge pub on Corporation Street, has a long history of music and performance. It was the venue that hosted Manchester Radio Online, a station that gave us Paul Ripley’s institution The Ripman Show, was home to controversial broadcasting legend James Stannage and even provided a platform for Frank Sidebottom’s Radio Timperley.  Owner of 15 years, Dave Foran, made the pub a go-to place on the young band’s circuit and even hosted shows in recent years by the likes of Ian McNabb, Evil Blizzard, The Bluebottle Veins, and The Cornelius Crane.

Now, thanks to the usual excuse of progress, it will soon be bulldozed. On Saturday, August 22nd it closed its doors for the final time and went out with a bang as up-and-coming band Sittin’ Pretty performed a storming set in the infamous Black Room.
The stifling heat of the day gave way to torrential rain and thunderstorms in the early evening, but that didn’t put people off from seeing the pub off in the best way possible – including drinking the bar dry.

But it was upstairs in The Black Room that the magic was happening. A short solo acoustic set got the crowd in the mood for the young band. Now, Sittin’ Pretty have been around for a few years, even releasing a pair of demo singles, but they are now being taken under the wing of people who see their potential and are blossoming into an exciting, captivating bunch.

Musically, it would be lazy to pigeonhole the group into any particular category. Sure, there’s a healthy helping of The Doors mixed in with a dollop of Led Zeppelin, a pinch of Lynyrd Skynyrd, the essence of The Black Crowes, and  a soupcon of Stone Roses attitude stirred in, but the band make the mixture sound fresh. Charismatic and confrontational (in the live environment, at least) Conor McKenzie-Wilde takes no prisoners. On stage, he’s a whirling dervish; rarely stood still, and not afraid to venture into the crowd – when he’s not attempting to out-stare them, that is. Rather than coming across obnoxious, however, the brashness is balanced nicely with a comfortable, natural, interaction with the crowd.

The band themselves provide a solid base for the frontman, and are clearly finding their space and will no doubt grow as time goes on. Drummer Sayon Beaufort-Harwood seemed to be really getting into the groove, hair flying everywhere while the rest of the band – Lewis Grounds (lead guitar) Cameron Gavin (rhythm) and George Brown (bass) all excelled, showing no nerves despite the significant occasion.

Ploughing their way through their set, even debuting a new number, Molly, which is intended to be the next single, the band deliver the goods, even if they still show room for improvement here and there. It’s something that will come in time, but the groundwork has been firmly laid for a promising future. With a retro sound that’s not too elitist, there’s potential for Sittin’ Pretty to make the leap that bands such as Blossoms have done.

With a healthy fanbase already, the room was packed with people who were ready to dance and sing. This wasn’t a night for hangers-on who had come to mourn the loss of am important pub; this was a celebration of a band preparing to go to the next level.

You can keep up to date with Sittin’ Pretty at their Facebook page.

All words by Martin Unsworth, find his Louder Than War archive here.