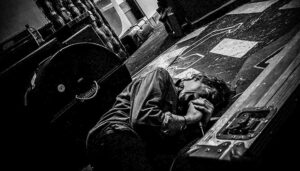 Hailing from Bolton, Greater Manchester, Sittin Pretty (no longer with an apostrophe!) are being tipped in some quarters as being the next big thing. Martin Unsworth checked out their latest EP for Louder than War.
We last caught Sittin Pretty as the played the very last night of the historic Ducie Bridge pub in the heart of Manchester. We hailed it as both the end of an era, but also the dawning of an exciting new age for music, as the five-piece practically began to tear the place down with their brand of energetic, blues-fuelled rock and roll.
Straight out of the gate we get the raw, impassioned voice of vocalist Conor McKenzie-Wilde, whose introduces 24/7, the lead track of this double-A-side EP, with an acapella opening; emotion dripping from the speakers. The band is channelling The Doors and Led Zeppelin with the vernacular drawl and swagger of the likes of The Stone Roses and Oasis, while they groove through the infectious song. Conor’s range covers some classic sounding blues notes, but with a very distinctive northern twang. It’s got the right balance to appeal to the rock crowd and also the indie kids looking for a new passion. Eschewing the commercial approach of a bouncy, dancefloor-friendly bop, the song has the potential to have staying power rather than a flash-in-the-pan ear worm. The nuances in the arrangement are brought to the fore by the stunning production by Stephen Wilson (The Cornelius Crane). The swirling guitar riffs and refrain are reminiscent of Dazed and Confused and build to a thunderous hook line, with Conor screaming “Molly… Molly… Take me away…” It’ll be in your head for days, but you won’t come to hate it like the aforementioned ear worms.
Second track Hopeless Annie shows yet another bluesy side of the band, which leads towards an anthemic chorus. The main problem with this track is it’s far too short. Like unplanned sex, you’re just getting into the rhythm of the piece when it’s all over. With such talent and a clear love of the style of music that allows freeform and improvisation, this could be a track that becomes an extended jam, shooting into fabulous and interesting places.
The EP is released digitally on all platforms on November 16th, with a physical release due towards the end of the month from Ripman Records, alongside a video for 24/7.
Sittin Pretty play at London’s Scala on Saturday November 21st, with DJ sets by FOALS and Radio X’s Sunta Templeton. Tickets are available here. Manchester fans can catch them at the Retro Bar on Sackville Street on December 11th.

All words by Martin Unsworth, find his Louder Than War archive here. He tweets as @liverecs and hosts It’s Only Rock n’ Roll on Fab Radio International.