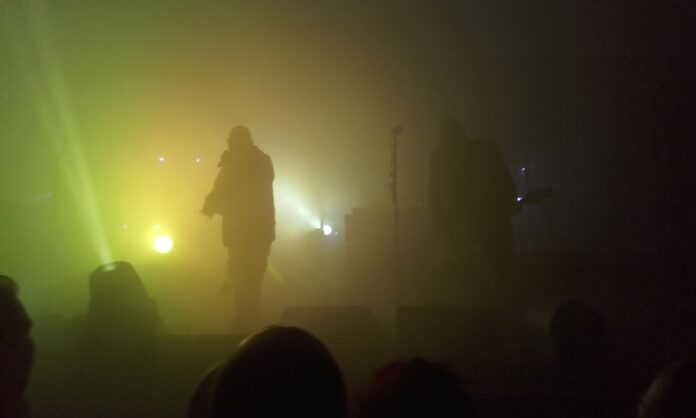 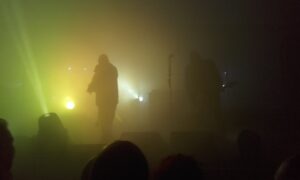 Surely one of the most enigmatic bands of all time – the Sisters of Mercy arrive back on the scene with one of their occasional tours.

With  a career shrouded in more dry ice than one of their live shows, the band remain outside the treadmill – refusing to release any of the new material which they play live and not playing the game whilst delivering these occasional spectral sets.

The hugely influential band, whose music inspired a diverse selection of bands from Steve Albini’s Big Black to the so called Goth and industrial scenes to techno DJs – never get the crdit they are due so we took great pleasure in celebrating their recent Manchester concert with our man in the audience Alex Staszko.

It’s Saturday night at The Ritz, and 8.30 is too early for a gig, especially one by those nocturnal shape shifters and dark matter overlords, The Sisters.

When I arrive at the venue it’s already steaming with the band’s trademark dry ice, creating a mystical fug that shrouds the band and fills your lungs. I push my way through the black clad audience towards the stage, and somehow end up about 5 rows from the front.

The audience are all very tall, is there some weird dark reason for this? They are almost as imposing as the band whose spectral presence is part of their legend.

After a couple of minutes in position the house lights go down, a dark synthesiser throbs in the distance and a deep bass drum kicks in – the 2 guitarists, Chris Catalyst (on the right) and Ben Christo (on the left), take to the stage.

The guitars kick in and it’s the dark and anthemic ‘First and Last and Always.’ The stage lights go up, to a very bright purple, fighting through and onto the dry ice which now encompasses the stage, and indeed the entire venue with its strange brew.

It’s great looking round and seeing The Ritz full of dry ice and the dark elixier of the band’s music. A small mosh pit starts as Andrew Eldritch’s vocals are lost in the mix though, barely audible in fact. They finally become loud enough for a stunning version of ‘Crash and Burn’ about 6 songs in.

Some of the audience don’t seem to get that they are at a gig and don’t like it when others dance, a common problem these days- top tip, don’t stand at the bloody front then! Also, thankfully there weren’t many camera phones in evidence tonight after camera bans at some of the other gigs on the tour, although not here. Indeed it’s the quietest security I’ve ever seen in The Ritz, people climbing on others shoulders to dance was allowed for once.

Most of tonight’s set has actually been released over the decades since thand emerged in the middle of post punk Leeds. In recently years the band gigs have usually contained a third or so of unreleased material. Some of the unreleased, heavily bootlegged songs are over 15 years old now. It’s interesting to see that a fair proportion of the audience know every word to “new” song, ‘Arms.’

But it’s basically a crowd pleasing set tonight. However The Sisters in 2015 are a different beast to the one that played here some 30 years ago. There’s a lot more electronica in the songs now, even in the old favourites like ‘Alice’, there’s a dark foreboding keyboard line lying underneath in the mix.

Andrew Eldritch works the stage like an old pro, singing from the middle and both flanks equally, patrolling his stage like a good un. Indeed both guitarists swap mics at one point for the backing vocals.

The lights and dry ice are amazing, bright, but still difficult to make things out. Much better than the old days where it was dry ice and monochrome. After instrumental ‘Gift That Shines’ the lights suddenly change colour, and as if by magic, Eldritch suddenly appears centre stage as the band launch into ‘Dominion’, the mosh pit grows and now it encompasses half of the huge dancefloor.

We get a great updated ‘Valentine’ before set closer ‘Flood II’. After only an hour, but what an hour the band leave the srage. Eldritch’s goodnight salvo is “yeah I know we’re not from here”, he walks off, then quickly comes back quipping “and to the guy who just booed, the criminal part of my family is from here.” The bloke in front of me retorts with “get back out here you work shy bastard.”

There wasn’t much shouting for the encore. Maybe they all think they’re watching the telly. Eldritch strides up to the mic and declares, “wish I hadn’t told you that” then the band play a lovely subdued ‘1959’ before storming through 5 singles, ‘This Corrosion’, ‘Vision Thing’, (they briefly went off here again, but to much cheering this time return with a last brace of songs) ‘Temple of love’, ‘Lucretia My reflection’ and ‘More’.

Words and picture by Alex Staszko, find his Louder Than War archive here.