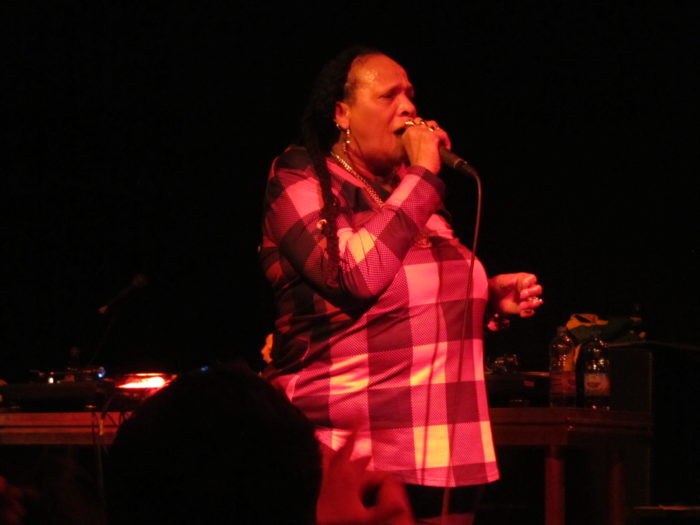 There’s much boomtastic bombastic, riddley diddley boing and all that malarkey going on in South Bristol tonight as a reggae dancehall night takes place at Fiddlers.

This genre, which broke out in late-70s Jamaica and has influenced much since including a new wave of international popularity in the last decade, used to be mainly male-dominated but that mold has been broken over the years by vibrant female talent – which makes it a pleasure to see the pioneer Sister Nancy here tonight.

Sister Nancy – real name Ophlin Russell – was hailed as the first female dancehall DJ when she followed her brother, the DJ Brigadier Jerry, into DJing in her teens back in her native Jamaica and became the first female DJ to perform at Reggae Sunsplash.  Now, at 58, she still has much presence about her: a big, bustling, rhyming ball of energy and sweaty bonhomie.

She’s preceded tonight by Bristol-based Jamaican dancehall artist Da Fuchaman, whose enthusiastic non-stop delivery, although admirable, does get a bit repetitive after a while.

Sound boy Legal Shot from France provides the crisp half time steppers, and then we have the full force of Sister Nancy with the Gallic sound system giving it large.

“Ain’t no stopping Sister Nancy now, cos I been DJing since I was 15…” she proclaims, in her loud, harsh, shouty vocal while delivering “…original tunes from the seventies upwards”. It’s a rhyming, chiming, up and down affair. Legal Shot’s backing tracks and mixing are sound, leading in numbers with some lovely vocal tunes from reggae’s past before Nancy takes over with her persuasive lyrical repetition and high-speed patter.

It’s high octane and there are pearls within the sea of rhyme, but the “I say boom you say boom” variety tends to sum up the sometimes repetitive shortfalls of the genre amid the obvious shards of inventiveness.

There are declamations to Jah and ganja, righteous preachings about all kinds of societal issues and wrongs, all blasted out in a voice that could strip wallpaper.

She ends with her biggest number Bam Bam, apparently one of the most sampled reggae songs of all time (most notably by the likes of Lauryn Hill and Kanye West) to the delight of the audience. “I’m 58 and I’m still here kicking it like a ball” as this woman, who only retired from being a bank clerk three years ago so that she could concentrate on singing full time, puts it.

Can’t really argue with that.

Words and photo by Elfyn Griffith.  More writing by Elfyn can be found at Bristol In Stereo