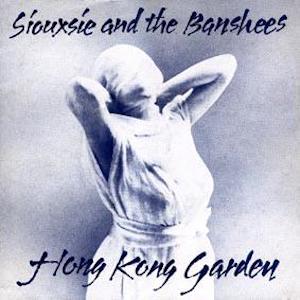 To celebrate over 35 years since its release, Polydor/UMG are excited to announce a very special edition vinyl reissue of Siouxsie & The Banshee’s seminal debut single “Hong Kong Garden”.
This highly covetable limited edition double 7″ package comes in a thick gatefold card sleeve with an 8 page booklet and reworked artwork and content overseen personally by Siouxsie and Severin.

The two record vinyl set features the original A and B-sides on the first disc, the 2nd features the “string intro” version that appeared in Sofia Coppola’s film “Marie Antionette” backed with a version of “Voices” from the 1984 ‘Thorn EP’ which is now in itself a very collectable item.

With its unmistakable playful xylophone intro, “Hong Kong Garden” was hugely innovative, a punk classic beyond the three-chord sensibility. Relentless guitar and Siouxsie’s distinctive vocals bring urgency and build tension which is released in one resounding blow of an orchestral gong as the song concludes.

Named after a Chinese takeaway in Siouxsie’s hometown of Chislehurst, “Hong Kong Garden” was first aired on a John Peel session and heard by Polydor A&R Alan Black. So, after a year of waiting for a record deal Polydor finally signed the band in 1978 – helped of course by the now infamous spray can campaign of “Sign the Banshees do it NOW”.

Originally not written as a single, the song was an established live favourite therefore the release was much anticipated through the summer of 1978. Following months of music press speculation on August 18th 1978 it was released; it went to number seven in the UK charts selling 400,000 copies and arguably became one of the most important singles of the post-punk era in the process.

The record was single of the week in the NME, Melody Maker and Record Mirror. Melody Maker underlined: “The elements come together with remarkable effects. The song is strident and powerful with tantalising oriental guitar riffs.”Record Mirror described the effect the record had as “accessibility incarnated… I’m playing it every third record. I love every second.”

NME hailed it as “a bright, vivid narrative, something like snapshots from the window of a speeding Japanese train, power charged by the most original, intoxicating guitar playing I’ve heard in a long, long time.”

Siouxsie and the Banshees were formed in London in 1976 by vocalist Siouxsie Sioux and bass guitarist Steven Severin. Though initially associated with the so called Punk movement the band rapidly evolved to create a form of “post punk discord full of daring rhythmic and sonic experimentation”. Amongst the many plaudits the band received over the years Siouxsie and the Banshees have been described as “one of the most audacious and uncompromising musical adventurers of the post-punk era”.

Siouxsie and the Banshees went on to record 12 studio albums and a string of top twenty hits over 17 years.