Home News Siouxsie And The Banshees ‘A Kiss in the Dreamhouse’ : Track by... 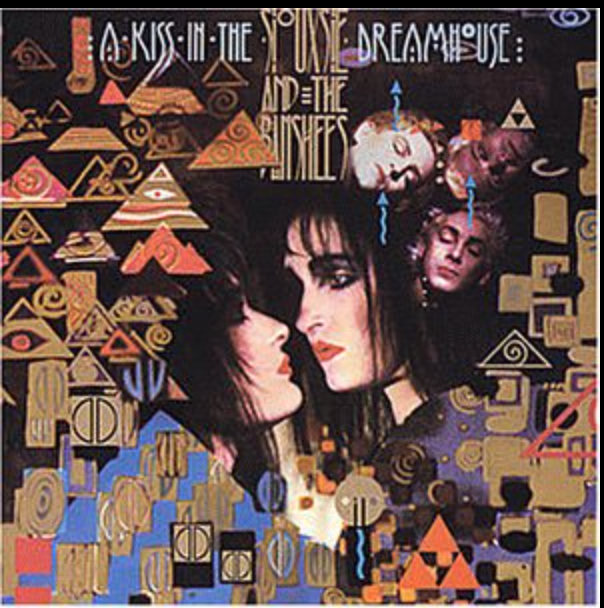 A Kiss in the Dreamhouse : Track by Track Analysis…
Siouxsie And The Banshees are one of the most important bands to come out of the punk rock explosion. Their first gig in 1976 at the 100 Club where they got up and jammed pretty well pioneered post punk (read an article about this gig and listen to it here). Their debut album is still a stark and brilliant piece whilst A Kiss in the Dreamhouse, released in 1982, is Milly Whyles favourite Siouxsie and the Banshees album – ‘it has a strong place in my heart and I hope this article does it some justice’…Milly is our newest writer and we love her 14 year old teenage perspective on these classic releases as well as her in depth perception…(She recently wrote a great piece on The Cure here)’

Cascade
This song sounds like it could easily be featured on previous album JuJu. It starts with echoey vocals before going full Siouxsie with that strong wailing tone – jangly guitars &a strong rhythm make it instantly recognisable as a Siouxsie and the Banshees song. It’s a perfect and catchy example of their unmistakable tone

Obsession
A very creepy number making use of several different instruments such as a church bell (played by Siouxsie herself) and lyrics verging on stalkerish insanity. Sound effects litter throughout the song, heavy breathing and whispers add to the unnerving atmosphere and the use of the bells makes it cultish and sinister. There’s a section of strings halfway through the song that are almost pleasant, generating sympathy for the maddened protagonist of the song’s story, a juxtaposition to the undeniably creepy majority of it.

Green Fingers
Whimsical and fantasy tinged, this uncharacteristically happy song tells of a girl who makes plants grow with a touch of her hand. The use of a recorder at the beginning of the song sets it up to imply the almost comforting childhood whimsy and dreamlike tones of the song. This is further accentuated by the sparkling noise that plays every now and again. Of course, this song doesn’t come without the gothic touch that makes this album so delectable. Parts of the song are vocally in a different key to the background music giving off a mildly unsettling effect.

She’s a Carnival
One thing that’s certainly constant in this album is the sense of storytelling. This is a fast paced and rather erratic song about a turbulent lover – the titular “she”. The vocals layer over each other in creative harmonies. The song ends on a section played by a fairground organ which brings about an unnerving but nostalgic feel.

Circle
This song is another perfect example of Siouxsie and the Banshees being effortlessly creepy. The song starts on a loop played by an accordion which has an uncomfortable discord to it, followed by the vocals which are off beat until a strong and swaying drum rhythm kicks in, bringing it all together. The accordion loop remains for the whole song, falling into the background. The lyrics speak of endless cycles and the feeling of never getting off the ground, and this is accentuated by the repetition of this loop. At the end of the song, the accordion is the only thing left fading out, which I suppose makes the whole song circular.

Melt
Brooding and gothic, this song makes use of themes of manipulation and control in a relationship. There is a call and response pattern with echoey responding vocals that repeat throughout the song. Some of the vocals are choral which reflects on the church bells used in Obsession, and it has a similar key signature of the aforementioned song as well, carrying the themes of the album.
Painted Bird
This is a song featuring poetic lyrics, a range of vocal styles and toned down percussion compared to many of the songs on this album. The chorus used a background vocal track which stops the main track from being as clear, driving a sense of imbalance since the tracks are at similar volume. Throughout the song there is a use of a reverse effect which sometimes makes it feel as if your head is spinning, often the aim of the songs and themes of this album.

Cocoon
Bass heavy and jazz influenced, this song almost sounds like a Disney villain could sing it. It’s probably one of my favourites on this album with pianos playing discords (uncomfortable!) and whispering vocals running through it. The bass line drives the song and there’s not nearly as much guitar work as in most of the songs on this album, it’s refreshing to see some attention put on Steve Severin’s fantastic bass playing.

Slowdive
This is a fantastic finishing track to a fantastic and pivotal album. The use of high and pizzicato strings at the start of this song convey some tension, before whispery sometimes even spoken vocals kick in. Some lines are accentuated by a strong, loud harmony behind them, accentuating their importance in the song (this is particularly evident in the chorus). It brings together many elements from the rest of the album, such as strings, whispered vocals, and a strong bass sound (this is first heard during the strings section at the beginning and provides a base for the percussion).