Home Blogs Sinosa: If U Must Dance – Single review 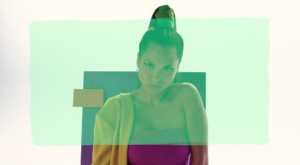 If U Must Dance

Louder than War’s Ioan Humphreys falls in love with some wonky electronica pop courtesy of Sinosa.

Sinosa hails from LA and was once in experimental indie rock band Fol Chen who The Wall Street Journal described as “a delightful mix of electronic pop and experimental music.” However since leaving Fol Chen, Sinosa now makes minimal artpop and is releasing her first solo release on the excellent Happy Robot Records label on 20th April 2018.

Sinosa works from her home in the Echo Park neighborhood of Los Angeles. Her studio is in essence a microphone, a sampler, and a midi controller. She has no soundproofing and frequently must pause recording for helicopters, sirens, and wild parrots.

If U Must Dance has an insanely catchy rhythm that is full of glitch, electronica, with the minimalist arrangement enhanced by Krafwerk esque sounds and samples.

Idiosyncratic, with a sultry, mechanical and clinical instructional delivery that at times reminds one of The Flying Lizards’ ‘Money’. Sinosa is certainly ploughing an individualistic furrow that is refreshing and needed.

It’s experimental, with unconventional time signatures, drum machine flourishes and at times feels very abstract which I absolutely love and approve of. Like nothing in the charts at the moment and this certainly deserves a place.

B-side The State has a great throbbing John Carpenter esque electronica running throughout. Keyboards and samples feature prominently and the snatches of heavily manipulated vocals overlay the again, abstract and unconventional structure.

It’s laid back, sexy, and like it’s A side, has an insanely catchy beat that gets the feet moving and the hips shaking.

Sinosa’s art is certainly not to be ignored and deserves to be included on playlists throughout the UK. Her distinctive style and delivery is unique and extremely captivating. Brilliant stuff!

Sinosa can be found via her Soundcloud and she tweets as @xsinosa.