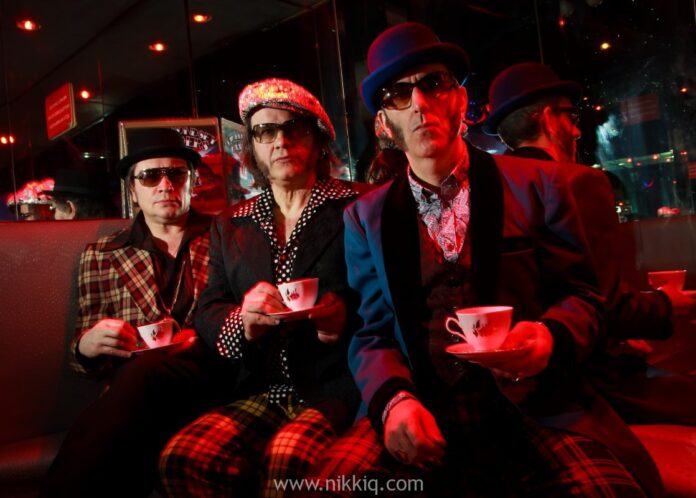 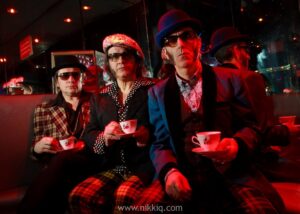 The Bermondsey Joyriders: Brian Jones (The Real True Leader Of The Rolling Stones) b/w Johnny Thunders Was A Human Being (Fuel Records)
DL/Vinyl
Due Out 14th April

Bermondsey Joyriders celebrate two of their heroes on one disc. Martin Haslam is impressed.

Having scored Album Of The Year at Vive Le Rock magazine with Noise And Revolution in 2012, The Bermondsey Joyriders return with their third album, Flamboyant Thugs, on May 26th. As a taster, they release double ‘A’ side single Brian Jones(The Real True Leader Of The Rolling Stones b/w Johnny Thunders Was A Human Being on April 14th via Fuel Records on lovely white 7″ vinyl.

I first became aware of The Joyriders last year when I reviewed a Flamin’ Groovies gig for LTW. They were the support band that night, and blew me away. Loud, brash and dressed to the nines (if you love Slade and tartan), they played a short set crammed with memorable tunes of rock n roll abandon. Noise And Revolution, their second album, (LTW review here), has been a turntable regular since(on cherry red vinyl, no less).

Brian Jones, boasting a video produced by Stones biographer Terry Rawlings, is a fitting tribute to the man who, common assumptions aside, made The Rolling Stones special. Nowadays, they’re The Stones; not the same thing, man.

Yes, he had many flaws and wasted his talent all too soon, but they’d never have achieved anything without his vision and talent. Gary Lammin, Joyriders main man, knows this well. He evokes the vision of Jones as Soho dandy, cutting a dash in the best clubs in his “candy-striped suit”. All set to a catchy 60’s beat, the intro hints at a Stooges riff before launching into a singalong chorus which I’m looking forward to singing in the crowd;”Hey, look, there goes Brian Jones! The real, true leader of the Rolling Stones”. A trippy middle eight, chorus to finish, and we’re outta here. A much needed blast of sound and colour.

‘Johnny Thunders Was A Human Being’, while name-checking Dolls titles to a suitably loose riff, is a celebration of the man but also somehow melancholy despite its tempo. “Part of the problem is that Johnny was a human being”; drummer Chris Musto previously played with Thunders in The Oddballs. He comments elsewhere that Johnny “was not perfect; he was far better than that. He was a human being”. This tends to get forgotten as time makes idols of those now gone. It’s a loud yet tender tribute. Based on these two songs, Flamboyant Thugs will be a treat. Hopefully on coloured vinyl.